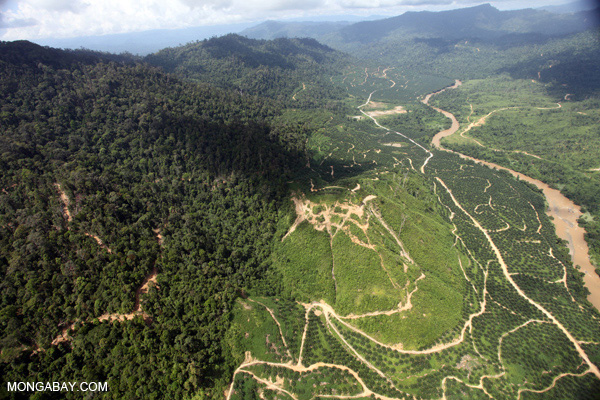 Logged over forest and oil palm in Sabah. Photos by Rhett A. Butler.

Sabah, a state in Malaysian Borneo, is weighing a proposal to produce only palm oil certified under the Roundtable on Sustainable Palm Oil (RSPO), an eco-certification initiative, by 2025. The move, if approved, would represent the first time a sub-national or state entity has committed to 100% certified palm oil production.

Sabah currently produces 12 percent of the world’s palm oil, making it one of biggest global players. Production comes from a wide range of actors, from smallholders to some of the biggest palm oil companies. That diversity however, makes a state-wide certification approach challenging, since smallholders typically cannot afford the cost of certification.

But some officials think that obstacle may be worth overcoming if it enables Sabah to differentiate its palm oil from other producers, especially given the rise in the number of companies that have adopted social and environmental safeguards for palm oil sourcing.

“Both global demand and downstream industries will increasingly pull the supply chain for Certified Sustainable Palm Oil and Sabah must act to be ahead of the curve,” said Sam Mannan, Director of the Sabah Forestry Department, which owns about 100,000 hectares of palm oil plantations in the state. “With time, large competitors will inevitably outpace Sabah’s total output of palm oil but with certification, Sabah can build itself as a niche producer of a branded good – i.e. certified palm oil, and compete on the basis of governance and not size.”

Deforestation for an oil palm plantation in Sabah in 2012.

The value may extend beyond brand awareness however — studies suggest that certification can provide dividends beyond public relations value by shifting adopters toward more efficient practices and bringing supply chains in line.

More broadly, better management of plantations could help maintain the ecosystem services that underpin much of Sabah’s economy. While some environmentalists have criticized RSPO for a variety of perceived weaknesses, its standards nonetheless bar conversion of high conservation value areas — a classification that would apply to much of Sabah’s remaining forest, which is home to orangutans, pygmy elephants, clouded leopard, and proboscis monkeys, among other endangered species.

“Jurisdictional certification will also draw bright lines to protect forest reserves, wildlife corridors, High Conservation Value Forests, riparian reserves and improve connectivity in a more coherent manner,” Mannan said, adding that concessions controlled by his department are required to meet RSPO criteria by 2017. Sabah’s Forestry Department has used funds generated from its oil palm plantations to support conservation and restoration of natural forest within a million hectare concession in the heart of the state.

Deforestation for palm oil production in Sabah in 2012.

Palm oil is one of the largest drivers of deforestation in Southeast Asia, which has lost a greater share of its forests than the Amazon and Congo Basin in recent decades. Accordingly, environmentalists have campaigned extensively to push new development to non-forest lands and boost yields in existing plantations.