“This is for the future of our oceans,” Indonesian Fishery Minister Susi Pudjiastuti exclaimed when she announced minimum size limits for lobster and crab catches in January this year. It was a commendable conservation initiative intended to boost crustacean stocks, particularly spiny lobsters (Panulirus penicillatus), an important export product. But the new regulation may inadvertently threaten the very species it aims to protect.

In Central Java – one of Indonesia’s bigger source regions for lobster – fishermen who once chased lobsters now target stingrays, showing how the unintended consequences of conservation-minded regulations could undermine their success. Stingrays stir up and oxygenate ocean floor sands, performing an essential ecosystem role by maintaining the habitat for the young of many commercially important species, including lobsters.

Even more troubling is that the main stingray species being targeted, the banded eagle ray (Aetomylaeus nichofii, known locally as ikan pari burung) is considered "vulnerable" to being endangered by the IUCN, while spiny lobsters are given “least concern” status.

In the beach town of Pantai Gesing on the Central Java’s turbulent southern coast, fishermen used to focus on netting lobsters for three months out of the year. Now that the new regulation forbids catching lobsters lighter than 300 grams (11 ounces) or with carapaces less than 8 centimeters (3 inches) wide, these fishermen, who once caught more lobsters than any other fishery in Central Java, have switched to fishing stingrays almost exclusively during lobster season.

Fishermen from Pantai Gesing set nets to catch lobsters because the sea is too deep around here to use traps. Lobsters caught in traps usually stay alive, so fishermen can keep only the ones above the size limit. But netted lobsters are often dead by the time they are brought up.

“We’re afraid to continue trying for lobster because our gear can’t differentiate by size,” Tugiman, the head of the local fishermen’s association, who like many Javanese only has one name, told mongabay.com. “Our equipment catches lobster – big, small, egg-carrying, not. We can’t choose.”

The new crustacean regulation is pasted on the wall at the fish weighing station in Pantai Gesing, and one sentence is underlined: “Any fishermen caught with dead lobsters below the size limit will be fined.”

Below the posted regulation and next to the scale are four freezer bins filled with rays with three- to four-foot wingspans. Hendri, the pot-bellied leader of the weighing station team, popped the lid on one bin to show off the day’s catch.

“You see this raised part,” he said, pointing to the place where the stingray’s tail meets its body. “That’s what the exporters want. It looks like pearls once they polish it, makes for pretty wallets…handicrafts.”

Stingrays weighing more than five kilograms (11 pounds) are sent to Jakarta, where their pelts are sold for handicrafts and their meat for consumption. Some of the skins are sent on to Taiwan, also for the handicraft market.

That local fishermen are focusing their efforts on stingrays could have an effect on the larger ecosystem, Kathy Townsend, a specialist in Elasmobranchii, the family of sharks, skates, and rays, at the University of Queensland in Australia told mongabay.com. Lobsters are bottom feeders. But stingrays are mid-level predators.

“Rays allow things to grow,” Townsend explained. Rays live on sandy and muddy substrates. They feed on snails, small crabs, and worms, and in so doing they stir up sediment. If sediment sits too long, it becomes anoxic, or airless, and can kill mud-dwellers that form the base of the ecosystem, including lobsters and crabs. So, if enough rays are killed off, lobsters may end up suffocating and their populations could decline. 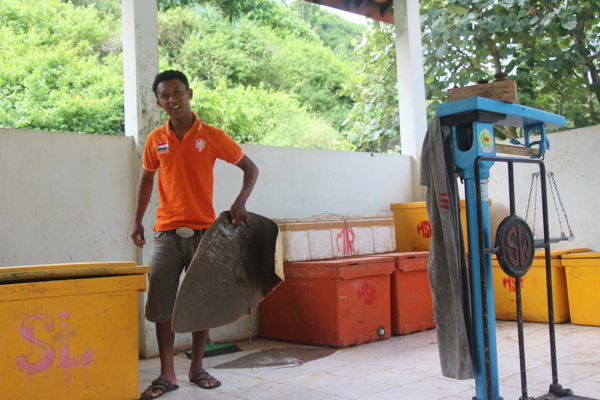 Fishing for rays can be done in a sustainable way. In Australia, for example, certain ray spawning grounds are protected. But in Indonesia only manta rays are protected, despite the country being what Townsend calls a “ray genetic hotspot with way more species than Australia.”

Though grateful for still having fish he can catch, Samingin is not thrilled to be fishing rays. Lobsters used to be one of a mix of species that Pantai Gesing fishermen would net. “[catching lobsters] was easy, we only had to travel to the front of our home bay. We’d spend a mere 100,000 rupiah [$8] on fuel for a fishing trip,” he said.

Now, when the season for pomfret and other fish is over, Samingin travels as far as Pantai Glagah, eight miles away, to hook rays. This means he burns through half of his earnings in fuel.

Even though Samingin would rather be netting lobsters than catching rays, he supports the size limit policy now being enforced by the ministry. “They are preserving lobsters for our children and grandchildren to catch or at least see. But they should have done a better job of telling us this law was coming,” he said.

Samingin and many other fishermen in Pantai Gesing incurred a significant financial loss buying lobster nets that they ended up not being able to use. So, as much as Samingin supports the intent of the regulation, he thinks it was irresponsibly introduced. “They just paste up the rules, but we think in seasons. We buy materials in preparation for the season. One set of lobster equipment costs 170- or 180,000 rupiah [$13 or 14] a set, and we buy numerous sets because they often break. Now those are just sitting at home,” he said. 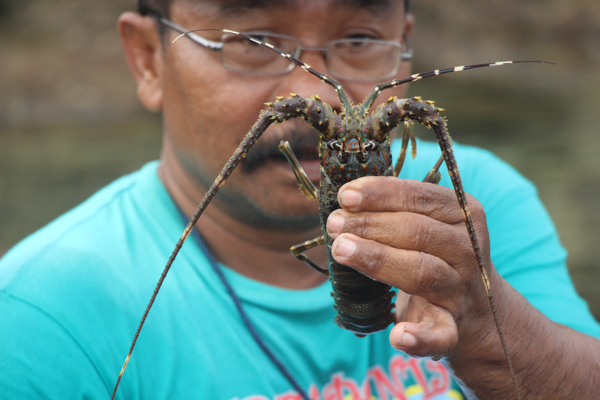 The fishery ministry, for its part, is already looking at aquaculture to replace the lobster fishery. In nearby Pantai Sepanjang, the regional fishery office is supporting a pilot project for lobster farming. Nur Wahyudin, a local 29-year-old with a degree in accounting, leads the project. He has placed nearly 100 lobster-rearing bins on the rocky tidal flats, against a backdrop of picturesque limestone cliffs.

Wahyudin sources baby lobsters and eggs for his business from local fishermen who tend traps. Trapping live lobsters is possible at Pantai Sepanjang, unlike at Pantai Gesing, because of the rocky tidal flats. The fishermen set the traps – metal rings with netting on top – on the nubs of the remaining reef at low tide and check the traps after the tide comes in and goes out again. The lobsters are still alive when they check the traps, and they give any bearing eggs or that are below the size limit to Wahyudin to rear to size. Once hatched, baby lobsters can drift out of the porous bins where their mothers are kept, and into the wider ocean.

This system falls into the “lobsters used for research or development” category excluded from the new size limit regulation. However, some scientists consider such “grow out” facilities that depend on wild stock not very sustainable in their own right.

The economics of the Pantai Sepanjang operation are still untested. Wahyudin has only sold one batch, though he has big plans for the future and encourages anyone and everyone to visit and learn his self-taught aquaculture technique.

If Wahyudin’s operation does prove successful, Tugiman, Pantai Gesing’s fishermen’s association leader, said he is willing to try it, though the model would have to be retrofit for a beach without tide pools. Convincing his association’s fishermen out chasing rays to come ashore to farm lobster might be a harder task. Samigin, for one, said he is holding onto his equipment in anticipation of the day when the size limits are lifted.