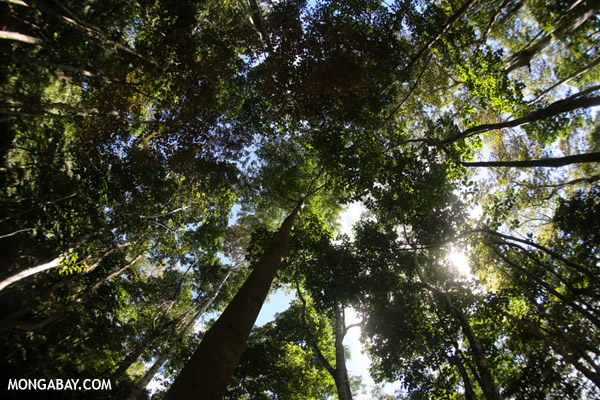 Rainforest in Kinabatangan, Malaysia. Photo by Rhett A. Butler.

Scientists at the Woods Hole Research Center in Massachusetts have developed vegetation height maps for the entire tropics at very fine spatial scales. These first-of its-kind high resolution maps can help researchers estimate forest cover, monitor biodiversity and wildlife habitats, and manage and monitor timber, according to a recent press release by WHRC.

Radar has the advantage of being able to acquire images at fine spatial scales anytime of the day. It can also penetrate through cloud cover, which is normally a handicap for most passive remote sensors. Lidar, too, can capture earth’s information anytime of the day. Moreover, lidar emits pulses of laser beams, which can be used to measure heights of objects on earth. This is similar to how bats use echolocation to find food.

Kellndorfer and his team combined more than 17,000 fine-scale radar images obtained by the Japanese ALOS satellite, with height measurements obtained by lidar on NASA’s ICESat/GLAS mission, and developed continuous vegetation height maps for North and South America, Africa, and Asia for the year 2007.

“So we had tens of terabytes of data, using which we produced some 20,000 satellite scenes, each over 1 gigabyte in raw storage,” Kellndorfer told mongabay.com. “So there was a big computational effort behind this. And in the end, we were able to develop statistical models to combine both lidar and radar observations to generate this kind of fine-scale, consistently produced dataset.”

WHRC’s pantropic maps are at a spatial resolution of 30 meters and can detect tree heights of up to 15 to 20 meters, the press release notes. This is an improvement over the previously existing vegetation height maps that were at coarser spatial scales, Kellndorfer said.

For instance, two previous global vegetation height maps developed for years 2005 and 2004, have spatial resolutions of one kilometer.

According to Nancy Harris, a researcher at the World Resources Institute, the finer scale maps developed by WHRC can help researchers get a better sense of “texture” in tree height data, such as how uniform the tree height cover is over the landscape. “That might tell us something about what types of trees are growing there and/or how they are being managed,” she added. 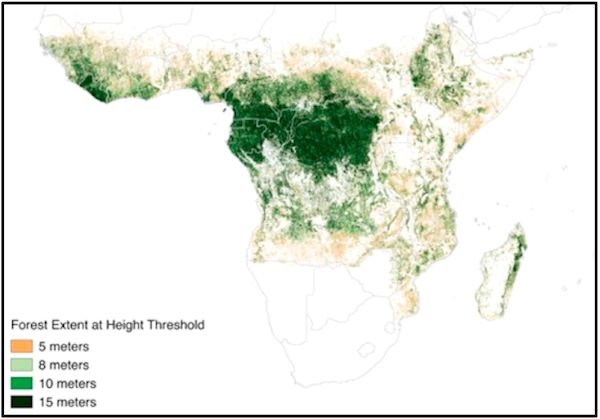 In fact, detailed vegetation height maps have numerous applications. For instance, they can be used to assess global forest cover.

“Many forest definitions include a height criterion in addition to crown or canopy cover. For example, trees must be taller than 5 [meters] in height,” Harris said. “From my understanding, many remotely sensed products of tree or forest cover use canopy cover as the main criterion with height much more loosely defined. This height dataset could be a useful supplement to those efforts.”

Kellndorfer added, “The nice thing with this dataset is that it offers a consistent, unbiased way to check forest cover.”

Despite the advantages of the fine spatial resolution and global coverage, WHRC’s maps have some limitations. For instance, lidar sensors have incomplete spatial and temporal coverage, capturing information from only a small part of the earth’s surface over a multi-year mission. Moreover, environmental effects like rain and other seasonality can lead to uncertainties in the dataset, Kellndorfer said. “So as people start using it, they will find that it works better in some regions than others.”

But these limitations can be overcome in the future through missions such as the NASA-ISRO SAR Mission, which aims to acquire global radar images rapidly. A similar mission for lidar called the Global Ecosystem Dynamics Investigation Lidar or GEDI, will have much denser observation points for lidar, Kellndorfer said. “And with such missions, there is potential to create global vegetation height maps annually.”

Another constraint with the vegetation height dataset is that it works well for trees with heights up to 15 to 20 meters, depending on location. “This is because of the sensitivity of radar at those heights with the particular approach we’ve used,” Kellndorfer explained.

This could limit the applicability of the global height maps, Harris noted. “The vast majority of tropical forests, and even other types of woody vegetation, are taller than 15 meters, even when young,” she said. “So the new data for the tropics are likely to be most useful for monitoring trees outside forests or regenerating forests, or trees that may be associated with restoration or plantation activities than monitoring the status of much taller primary forests.”

However, Harris added that WHRC’s vegetation height data could be useful for WRI’s Global Forest Watch, an online forest cover monitoring platform.
“Currently we have a previous version of tree height as a basemap layer on GFW,” she said. “But it could be useful to overlay the new height data with a tree plantations layer we are finalizing and releasing over the next few months to see if this information could shed additional insight as to where plantations exist as opposed to natural forests.”

Disclosure: WRI provides funding to Mongabay for a reporting project, but WRI has no editorial influence or control over the content that is produced under the partnership.

Editor’s note: a previous version of this article included a mistakenly labeled map. The image has been removed. We apologize for the error.