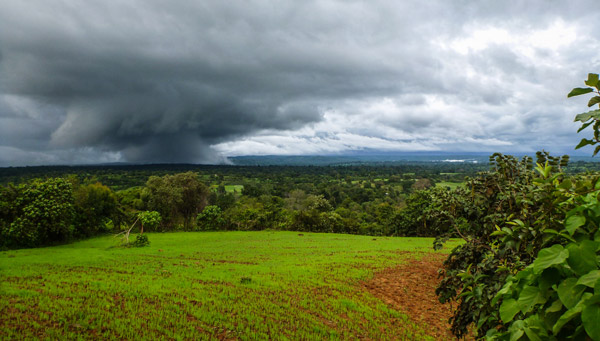 A thunderhead builds over a lush agricultural mosaic in a coffee growing region of Ethiopia. Photo credit: Evan Buechley.

The next time you order that “wake up” cup of Joe or reach for a sweet treat, you may want to consider whether those coffee or cocoa beans were grown in the shade or open sun. Choosing the shade grown variety can offer huge benefits to tropical birds, their ecosystems and farmers says a new study by Cagan Şekercioğlu published in the Journal of Ornithology.

The University of Utah scientist looked at how tropical birds interact with agricultural habitats to better understand their ecology, the ecosystem services they provide, and conservation. His research specifically compared the types of birds that utilize primary growth forests, agroforests (where crops like coffee and cocoa are grown in the shade of native trees), and open farmland (where these same crops are grown in bright sun). 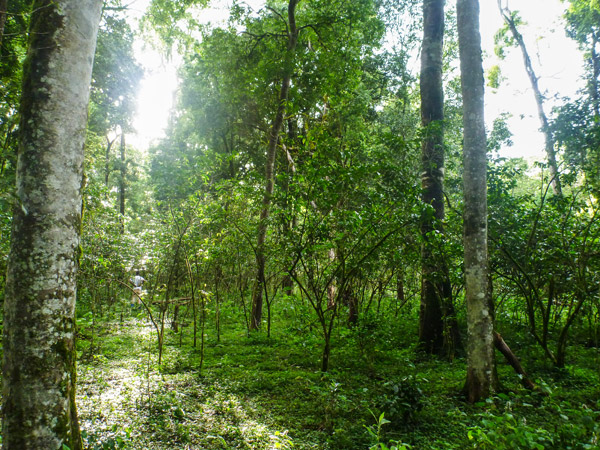 Şekercioğlu did meticulous work: He began by sorting a global database of more than 10,000 birds, cataloging them by their habitat choices. Next, he reviewed 40 previous studies that examined various bird communities. Ultimately, he narrowed his view to 6,093 tropical bird species, including migratory birds, categorizing them by their preferences for forest, agroforest, and open farms. 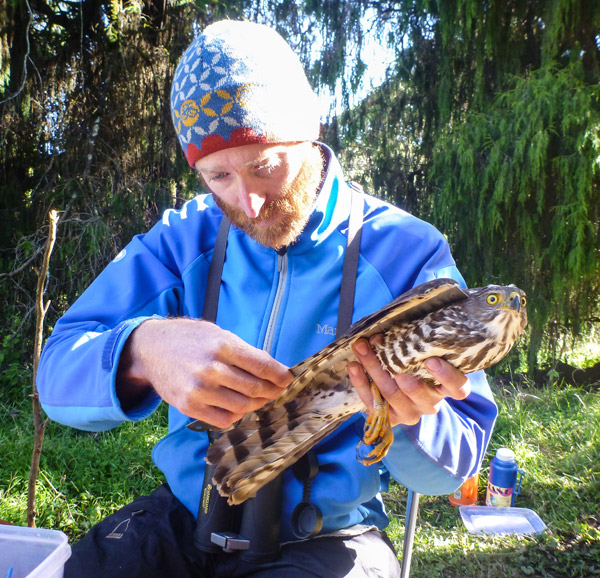 Ringing a Shikra Accipiter badius. Raptors were a rare but exciting catch during the study. Photo credit: Evan Buechley.

“As you go to more and more open agriculture, you lose some bird groups that provide important ecosystem services like insect control [insect eaters], seed dispersal [fruit eaters] and pollination [nectar eaters], while you get higher numbers of granivores [seed and grain eaters] that actually can be crop pests,” Şekercioğlu said.

While the shady park-like settings of agroforests obviously aren’t ideal wooded habitat, they do provide many of the benefits of primary forests. “Fruit and nectar consuming species do well in agroforests,” said Şekercioğlu. Hummingbirds, for example, “thrive in agroforests because they mirror the more open parts of forests that [hummingbirds] typically prefer in a tropical forest.” 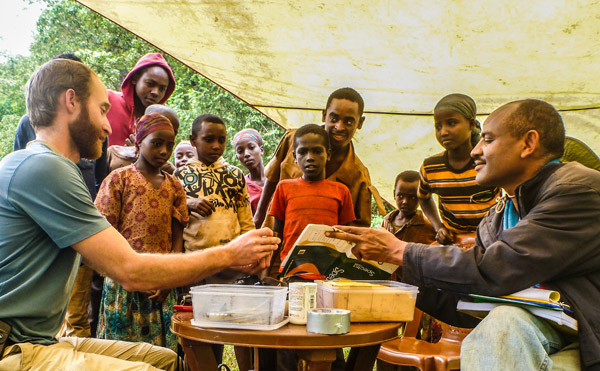 Insect eaters, by contrast, don’t do well outside of primary forests. “Insectivores have great potential to help farmers by controlling pests, so it was surprising to find that their numbers were low,” in agroforests, he said. This fact suggests that farmers could cut pesticide use by preserving tracts of primary forest — habitat that favors insectivorous birds — in proximity to croplands. 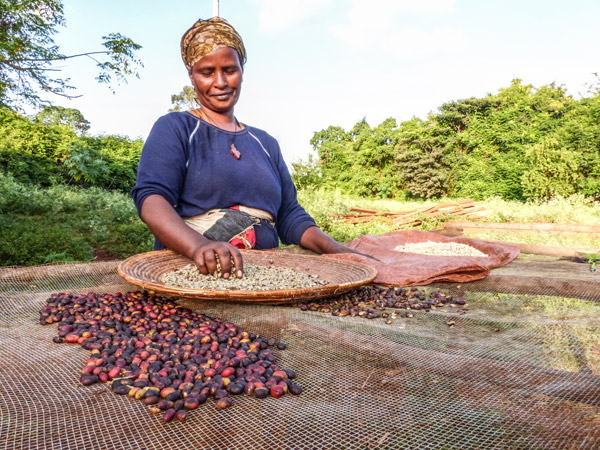 Coffee berries dry on a screen in the foreground while an Ethiopian woman handles coffee beans in the basket. Once the berries are dried, they are crushed with a wood mortar and pestle, and the beans are separated from the dried husks, resulting in the green coffee beans shown in the basket. Photo credit: Evan Buechley. 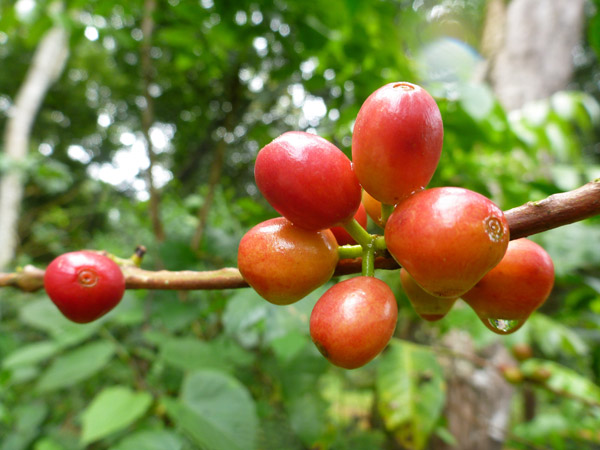 “There is potential for consumer choice to have far reaching and powerful impact,” Şekercioğlu told Mongabay.com. He hopes people will select shade grown coffee and cacao. “Choosing products that promote conservation and responsible farming practices provides those farmers with the financial incentive to take a risk and produce crops in a way that is economically risky but helps maintain global biodiversity. This project is just the tip of the iceberg. There are other investigations to make, such as how mammals interact with tropical agriculture, and how agroforests can even improve social justice in the tropics.”

Şekercioğlu urges against placing too much value on agroforests as habitat. “A lot of threatened species globally are found only in forests, and most of them disappear from agroforests and open agricultural areas,” he said. “Although agroforest is better than open farmland, at the end of the day intact tropical forest is the only suitable habitat for thousands of bird species.”

Consumers interested in making eco-friendly coffee and cocoa choices can find out more about branding and labeling that identifies shade grown products online at The Smithsonian Migratory Bird Center or The Rainfroest Alliance . 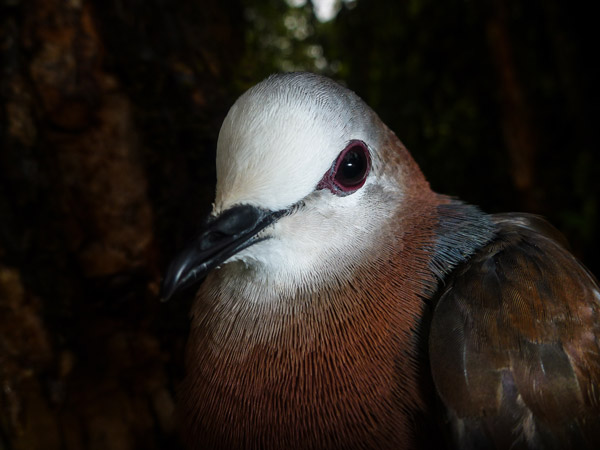 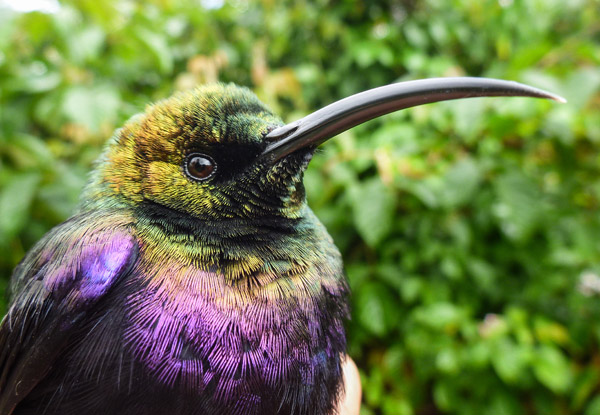 A Tacazze sunbird Nectarinia tacazze is a nectar-eating bird in Ethiopian forests, one of the birds that can live and help sustain healthy habitat on shade-grown coffee farms. Photo credit: Evan Buechley. 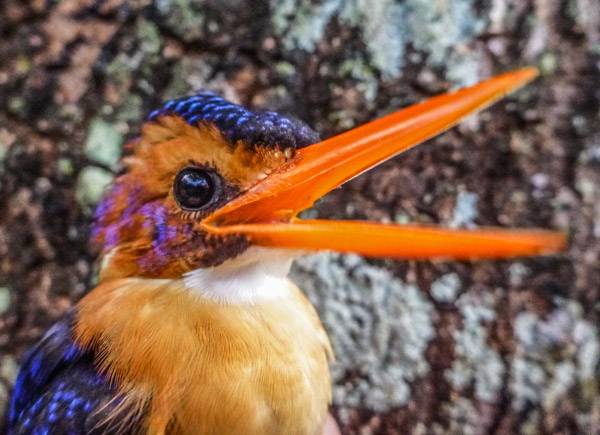 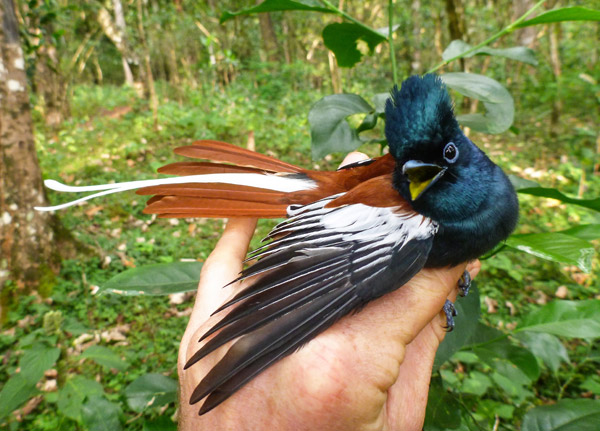