Fragments of cerrado forest in Brazil’s Mato Grosso state. The proposed railroad route goes through some of the last standing intact forest in the state. Photo by Rhett A. Butler.

China is looking to add another rung to its investment presence in Latin America, with an announcement of plans to build an expansive railway bisecting the continent from Brazil to Peru. The bid has raised the hackles of conservation groups, which are concerned the railway will run through sensitive ecosystems, harm threatened wildlife, and affect indigenous communities.

The announcement was made earlier this month by Chinese Premier Li Keqiang, with the intent to reduce transport costs of commodities like oil, iron, and soy produced at inland sites. Li followed the announcement with a visit to South America to strengthen trade and investment relations between China and Brazil, Colombia, Peru, and Chile.

The proposed rail route runs 3,500 kilometers (2,200 miles) from Brazil’s Rio de Janeiro state northwest around the northern edge of Bolivia and into southern Peru, ending at the Peruvian coast. If developed, it may cost upwards of $10 billion and would go through many of South America’s most threatened ecosystems, including the Atlantic Forest, cerrado, and the Amazon Basin. 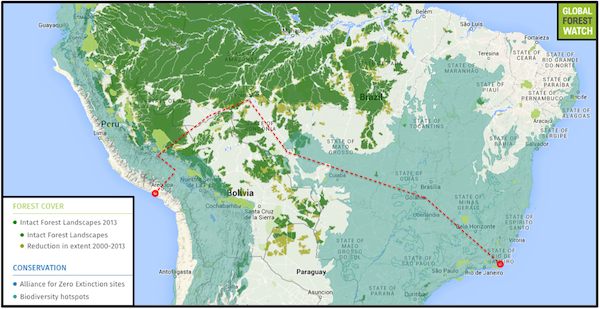 Approximate path of the proposed railway. According to data from Global Forest Watch, the proposed route goes through or near biodiversity hotspots, intact forest landscapes (large areas of primary forest), and Alliance for Zero Extinction sites (where highly endemic and at-risk species are found). Click to enlarge.

The cerrado – which means “closed” in Portuguese – is a vast grassland with sparse forest that is home to hundreds of animal species, many of which are endemic or found nowhere else in the world. Once ignored for development because it was not conducive for farming, the U.S. began conditioning its soil with lime in the 1960s. Since then, much of the cerrado has been converted for agriculture, turning what was once South America’s largest savannah into a land dominated by soybean fields and cattle pasture. Scientists estimate only around 50 percent of the cerrado exists today, a number that is ever-diminishing as its landscape is cleared twice as fast as the Amazon rainforest.

The Atlantic Forest once spread across 150 million hectares and harbored more than 650 endemic vertebrate species. But now it covers just 8 percent of its original expanse due to deforestation for sugar cane plantations, cattle ranching, and other developments. Adding insult to injury, the 8 percent of remaining Atlantic Forest is not cohesive, occurring as a patchy mosaic of fragmented forest “islands.” Habitat fragmentation can be devastating to threatened species that cannot move between patches, barring the exchange of genes and access to resources if one patch runs dry.

Li said China, Brazil, and Peru have agreed to conduct a feasibility study of the rail plans, adding that environmental protection and biological diversity will be kept in mind as they go forward.

However, environmental groups are voicing concerns about the impacts the railway may cause if it is realized.

“This project is iconic and is likely to become centre-stage for Latin American civil society organisations,” Paulina Garzon, director of the China-Latin America Sustainable Investment Initiative, told the Guardian. “It is way too big to pass unnoticed, and … will be tremendously controversial on both environmental and social fronts: first because of its size and location but also because Latin-American environmental groups and indigenous organisations are quite vocal and very well-networked.”

The proposed route goes through indigenous areas in the Amazon, leaving some worried about its effects on indigenous communities. “Past mega-projects suggest that far from consulting the indigenous communities that lay in their path, the government is more likely to steamroll their rights while paying mere lip service to environmental protection,” said Christian Poirier of Amazon Watch. “As with road projects, railways open access to previously remote regions, bring a flow of migrant workers inevitably followed by deforestation mafias and cattle ranchers, creating a perfect storm of pressures upon the forest and forest peoples.”

China is a growing presence in Latin America, with a pledge to invest $250 billion through projects like mines, dams, oil concessions, and transit infrastructure such as the Gran Canal. Announced last year, the behemoth waterway would flood more than a hundred miles of forest in Nicaragua and cost more than four times the country’s GDP. While some Chinese companies are complying with environmental protection standards, critics say developments like the proposed railway may come at a high cost to the surrounding land and communities.

“The good part is that it’s an investment in a different mode of transport. But it seems to follow mining logic – first you build a road, then a hole,” Nilo D’Ávila of Greenpeace told the Guardian. “They need to guarantee it can be built without causing problems.”