Clearing of Brazilian Amazon rainforest for soy. Photo by Rhett A. Butler.

A study on the impact of forest loss on biodiversity, recently published in the journal Conservation Biology, shows that one-third of the Brazilian Amazon is headed toward or has just passed a threshold of forest cover beyond which species loss accelerates and is more damaging. The study, led by Dr. Jose Manual Ochoa-Quintero with the University of Cambridge, is one among few large area studies that have been carried out.

It is also one of the first studies to map the impact of deforestation on biodiversity across entire regions of the Amazon. By measuring the loss of some dominant species of mammals and birds and using the results as indicators, the researchers found that for every 10 percent of forest that is lost, one to two major species are wiped out. This continues until the forest cover reaches a threshold of 43 percent. Below that, the rate of biodiversity loss escalates and anywhere between two and eight major species disappear per 10 percent forest loss.

“This is not just a result of overall loss of habitat, but also reduced connectivity between remaining forest fragments, causing species to hunt and mate in ever-decreasing circles,” said Ochoa-Quintero, who is also the lead author of the paper. “This fragmentation may be the key element of the ‘threshold’ tipping point for biodiversity.” 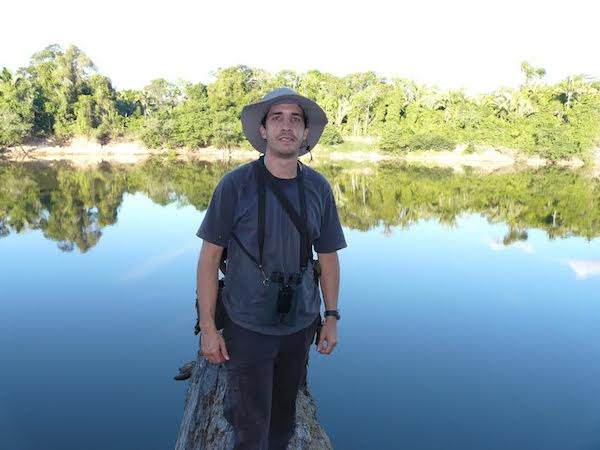 Current Brazilian law, called the Forest Code, “is the primary mechanism for protecting native forest and associated biodiversity in farmlands in the Amazon basin,” the study says. It is applied at the farm scale and requires at least 80 percent of native vegetation to be retained on farmlands. However, this law is rarely complied with or enforced.

To prevent untold regional loss of biodiversity in areas that slip below the 43 percent forest cover threshold, the researchers recommend a shift in focus. “These results support the need for a major shift in the scale at which environmental legislation is applied in Brazil and the tropics,” Ochoa-Quintero said. “We need to move from thinking in terms of compliance at a farm scale to compliance at a landscape scale if we are to save as many species as we can from extinction.”

With a vast area to cover, the researchers divided their study region into 1,223 landscapes of 10,000 square kilometers, then selected 31 as representative of the spectrum of forest cover across the region. Twenty-seven of these landscapes were on private land while four were protected areas.

“In total we spent three years to carry out this project from conception to data analysis and writing up,” Ochoa-Quintero told mongabay.com. “We spent approximately one year in the field plus two years to analyze the data set and the results.”

The study defines the highest priority landscapes – about 33 percent of the land in the region – as those that either dipped below the 43 percent forest cover threshold in 2010 or are expected to in the next 20 years. It says these areas will suffer between 31 to 44 percent species loss by the year 2030.

The researchers modeled how deforestation occurring at current rates might affect how many species occupy a given area in the Brazilian state of Rondônia. Their results revealed that landscape-level species loss mirrored forest cover loss and that by the year 2030 only 22 percent of landscapes would likely be able to sustain at least 75 percent of the 35 focal species that were sampled. These species included medium-sized mammals and birds falling within various IUCN Red List categories like the red howler monkey (Alouatta seniculus) and Spix’s guan (Penelope jacquacu) classified as Least Concern, the Vulnerable giant anteater (Myrmecophaga tridactyla), the Endangered white-bellied monkey (Ateles chamek) and the dark-winged trumpeter (Psophia viridis), and the Near Threatened jaguar (Panthera onca) and harpy eagle (Harpia harpyja). All these species are native to the region that was studied – an area in the northern half of the Brazilian Amazon state of Rondônia in the interfluvium of the Mamore-Madeira and Ji-Parana rivers that amounts to over three million hectares of land. The study also says that similar results were found in other landscape-scale studies carried out in the Brazilian Atlantic Forest, as well as in Australia and Finland.
Expanding and encroaching agriculture – from beef to soy – in recent decades means that almost 41 percent of original forest in the study region (approximately two million hectares) has been lost over just the last 40 years. Jaguars have an expansive range over South and Central America, but their habitat is increasingly fragmented by development. Photo by Rhett A. Butler.

The study also says that with a growing and more affluent human population to feed, at current rates, the number of large-scale landscapes (more than 10,000 square kilometers in size) in the Amazon that fall below the species loss threshold will almost double by 2030.

Researchers say that protected areas (PAs) can counter agricultural expansion. However, the size limits on plots that can be set aside for PAs on public land means that the success of biodiversity conservation depends also on protecting native vegetation on private land.

“In addition to the effects of forest area and fragmentation, the degradation of remaining fragments due to correlated disturbances from logging and fire, as well as unsustainable hunting and extraction of other resources, can also threaten the future of species that depend on relatively undisturbed tracts of forest,” the authors write. 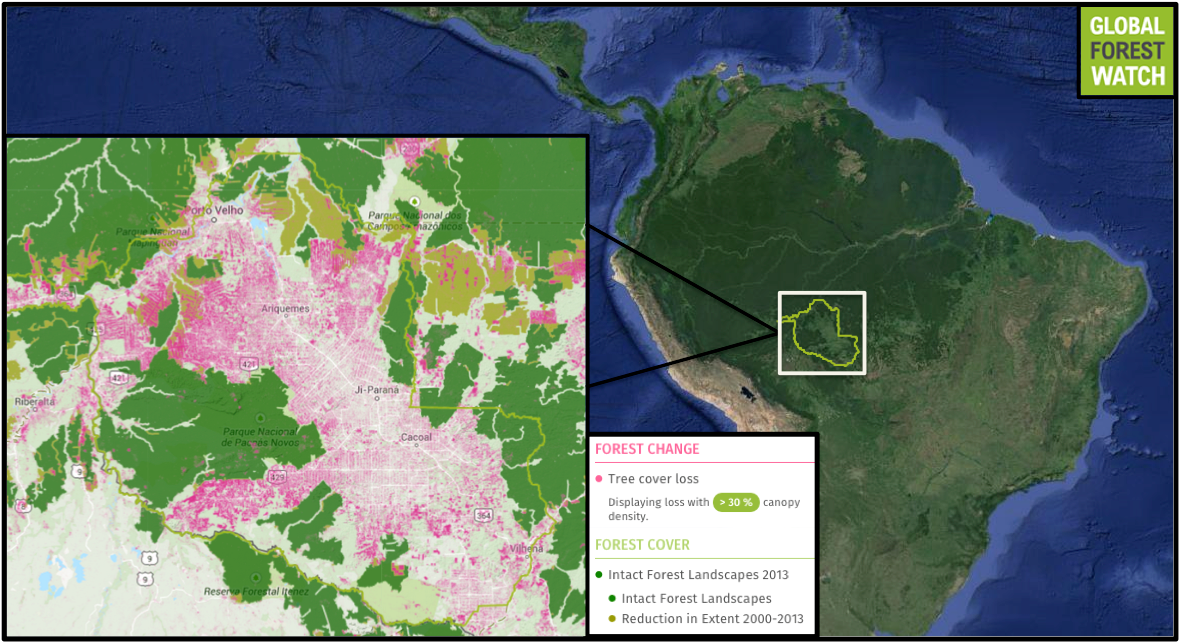 Rondônia, where the study took place, has been extensively developed for agriculture. According to Global Forest Watch, the state lost nearly 3 million hectares – or 15 percent – of its tree cover from 2001 through 2013. A quarter-million hectares of that loss occurred in intact forest landscapes, which are regions of undisturbed forest large enough to support their original levels of biodiversity. Click to enlarge.

The highest level of deforestation, the study says, is likely to occur farther north in landscapes with high forest cover where new infrastructure and development projects like roads are anticipated. These will increase accessibility and, as a likely consequence, deforestation. Researchers found that landscapes with over 70 percent forest cover were largely located inside protected areas and far from major paved roads.

The authors say that their research may help identify clear priorities for conservation interventions based on differences in current forest cover levels and expected rates of deforestation. They also believe that a similar approach can also be useful in restoration projects to define native vegetation cover targets on the basis of a threshold of species loss.

“Avoiding deforestation and focussing reforestation in the areas that teeter on the species loss threshold will be the most direct and cost-effective way to prevent further species loss in the Amazon region,” Ochoa-Quintero said. “The reduction of deforestation along this area, in addition to law enforcement, may be crucial to reduce habitat loss and keep most of the sampled species.”