62M ha of Latin American forests cleared for agriculture since 2001 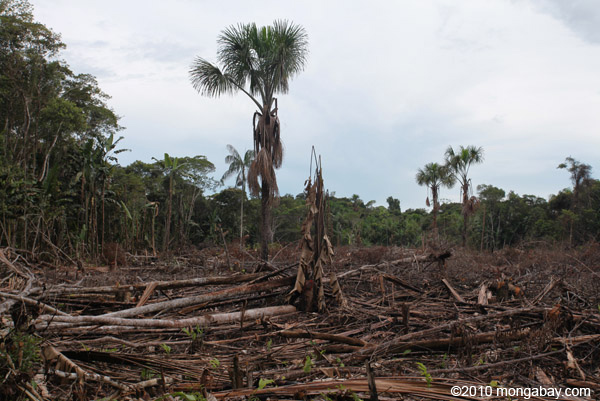 Forest conversion for agriculture in Colombia. Photos by Rhett A. Butler.

Over 62 million hectares (240,000 square miles) of forest across Latin America — an area roughly the size of Texas or the United Kingdom — were cleared for new croplands and pastureland between 2001 and 2013, find a study published in Environmental Research Letters.

Analyzing NASA MODerate Resolution Imaging Spectroradiometer (MODIS) satellite imagery, Jordan Graesser of McGill University and colleagues documented agricultural expansion across Central and South America, finding that cropland and pasture increased by 44.3 million hectares and 96.9 million hectares, respectively, during the study period. The researchers also analyzed the prior status of the land, concluding that 17% of new cropland and 57% of new pastureland replaced forests.

The impact of agricultural expansion on forests was highly variable across the region. 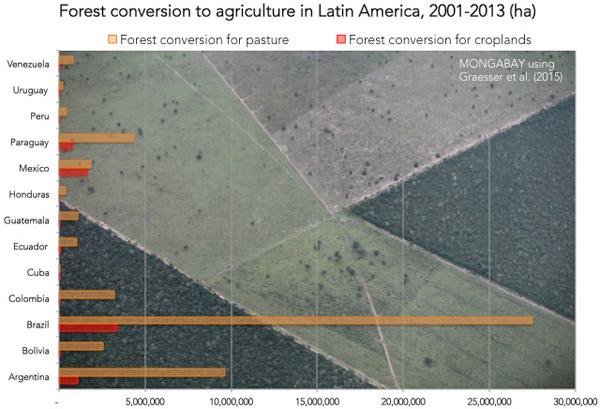 “Agriculture-led deforestation rates were high outside of the Amazon, in the Dry Chaco Forests (western Paraguay and northern Argentina), Caquetá and Putumayo (Colombia), and Petén (Guatemala),” the authors write, adding that “cropland, in addition to pastureland, drove deforestation in eastern Paraguay, central Mato Grosso, and the Argentine Chaco.”

“Brazil’s Cerrado and Argentina’s Humid Pampas ecoregions witnessed the greatest increase in new cropland, with 9.96 Mha and 6.43 Mha added from 2001 to 2013,” they continue. “The Alto Paraná Atlantic Forest and Espinal had the third and fourth highest amount of new cropland, at 4.8 Mha and 3.14 Mha, respectively.”

Both Paraguay and Bolivia have experienced rapid growth in soy and cattle production. 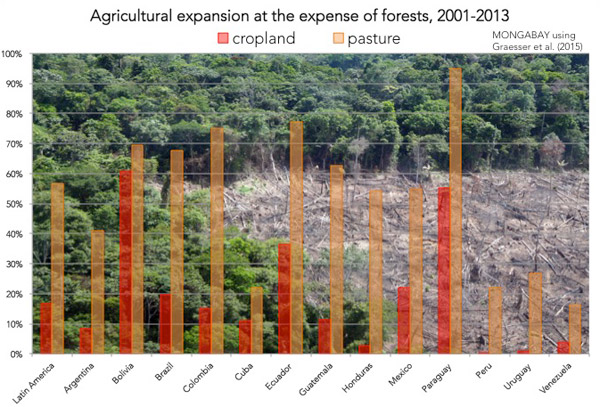 Comparing the study’s results to forest cover data published on Global Forest Watch, Argentina (31 percent), Paraguay (25 percent), and Guatemala (15 percent) lost the largest percentage of forest cover to cropland and pasture expansion during the period. Peru, Venezuela, and Cuba ranked at the bottom of the list by those criteria.

The paper also looked at expansion rates within the study period, finding a significant slowdown after the global financial crisis, when commodity prices plunged.

“As others have suggested, regional agriculture is strongly influenced by globalization,” they write. “Indeed, we find an overall decrease in agricultural expansion after 2007, coinciding with the global economic slowdown.”

That suggests deforestation may rise with commodity prices, which in 2010 and 2011 climbed beyond pre-financial crisis highs, before dipping in recent months. However that assumption may not hold for all countries. For example, deforestation in the Brazilian Amazon declined on an annual basis through the period of high commodity prices. Stepped up law enforcement and private sector initiatives to exclude commodities produced via deforestation have been important factors in disaggregating forest clearance from agricultural production in Brazil.

Nonetheless, the research confirms agriculture’s role in driving deforestation across Latin America, which lost the largest area of forest in the tropics of any region since 2001.