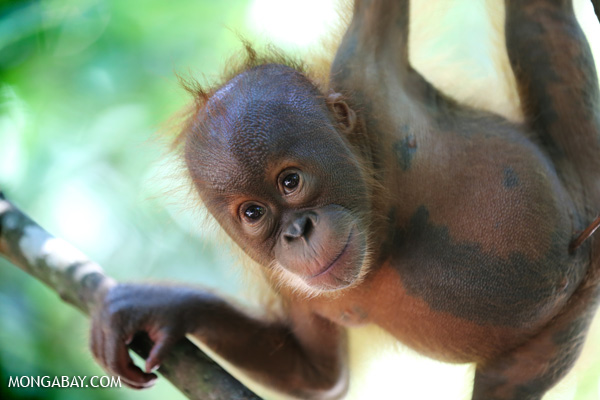 A baby orangutan in Indonesia. Photo: Rhett A. Butler

Thirty orangutans being kept as household pets in Indonesia’s West Kalimantan province have been seized and placed in a rehabilitation center, local conservation authorities report.

Sustyo Iriyono, head of the province’s Natural Resources Conservation Agency (BKSDA), said he was relieved that the push to save the creatures, conducted jointly with International Animal Rescue (IAR), was finally bearing fruit.

“The information [leading to the rescues] mostly comes from [local] people who begin to worry about the fate of the orangutans,” he said.

The 30 orangutans now reside at an IAR shelter, where they are learning to fend for themselves so they can be released into their natural habitats.

“Usually, orangutans live with their mother until the age of seven or eight,” IAR director Karmele Sanchez said. “During that time, they are taught how to choose trees for nesting, forage for food and survive enemy attacks.”

The latest three arrivals at the shelter are babies; one of them is malnourished. In the wild, orangutans drink only breast milk until the age of three, but in captivity they often receive a different diet. “In previous cases, most of the orangutans were given food and drink meant for human consumption,” Sanchez said.

At present, IAR is getting ready to release six individuals in Mount Palung National Park, which according to a 2001 survey was home a tenth of the world’s population.

Orangutans are an endangered species, and the trade in them is illegal. Violators can be imprisoned for five years and fined Rp100 million ($7,600).

Today, an estimated 57,000 of the creatures exist in Borneo, but their population is rapidly dwindling as the island loses its forests. Sumatra is home to 7,500 individuals. They reproduce slowly, with females giving birth just once every seven or eight years.