Frightened and malnourished female elephant calf in an enclosure in Zimbabwe prior to exportation to China. Photo courtesy of ELEPHANTS DC.

A hundred thousand African elephants were killed by poachers for their ivory between 2010 and 2012. Now a new threat looms: a growing wildlife trade in baby animals to satisfy international tourism.

Zimbabwe has reportedly taken 80 elephant calves from their mothers and families in the wild, and is currently holding them in two heavily guarded facilities in Hwange National Park and near Victoria Falls. The baby animals await transport overseas for sale to unidentified buyers, possibly in China or other countries, says the international elephant rights organization, Global Action Ending Wild Capture (GAEWC). The group believes that two distressed elephant calves have already died in captivity.

The governments of both Zimbabwe and China have issued official statements refuting the alleged wildlife transactions. However, GAEWC has stated that it has information from reliable sources confirming that a total of 200 elephant calves have been purchased by China, where demand for elephant tourism has grown for exhibition in zoos and performance in circuses. The captive elephant calves not only come from Zimbabwe; many are said to have originated in the wilds of Botswana, Zambia, and Namibia.

Conservationists anticipate that many of the baby elephants will die as a result of the hardships and cruelties associated with wildlife trafficking. That is because young elephants are extremely intelligent social animals that rely heavily on their mothers and families, and so are highly vulnerable to the stress and trauma of being separated from family groups and being caged.

An investigative story by Christina Russo published in National Geographic, recently reported that Zimbabwe’s government plans to capture and sell hundreds of young elephants to unidentified foreign buyers for $40,000 to $60,000 each. The average age of the elephants was estimated to be around four years old. Photos obtained by a U.S security firm and appearing in the magazine show clearly that the baby elephants are malnourished, stressed, alarmed, and fearful of their unnatural surroundings.

The captive elephants may be destined for Chinese zoos and circuses, where they will likely endure additional neglect, suffering and premature deaths. The animals there are trained through beatings to perform numerous tricks for tourists including dancing to loud music while being spun on a wheel, or walking a balance beam. “When not performing, captive elephants are chained by their legs in small, dingy, unsanitary pens, and are led to and from shabby arenas by trainers employing bull hooks to compel obedience,” said GAEWC.

Zimbabwe’s plan to cash in on the export of elephant calves is legal. It qualifies as a means for generating conservation income through natural resources under the Convention on International Trade in Endangered Species of Wild Fauna and Flora (CITES), an international treaty.

Saviour Kasukuwere, Zimbabwe’s Minister of Environment, Water and Climate, claims that the funds raised by exporting the elephants will be used for the salaries of the nation’s wildlife rangers, who would otherwise turn to poaching elephants for money. “If we deprive the men and women who protect these animals of the necessary salaries, they are likely to turn into dangers, in other words poaching, which will… be much more difficult to manage,” said Kasukuwere, speaking to Zimbabwe’s Senate in March.

Many international environmental organizations are closely monitoring the situation in Zimbabwe including the Botswana non-profit organization, Elephants Without Borders; the International Fund for Animal Welfare; Elephants DC; the Zimbabwe Conservation Task Force; and Elephant Voices.

Jen Samuel, the president of Elephants DC, a non-profit organization dedicated to elephant wellbeing, told mongaby.com that Zimbabwe is showing no signs of bowing to world opinion. “The situation remains dire, and the government of Zimbabwe has recently reaffirmed its pledge to export more young elephants to foreign buyers, and added that ‘culling’– mass slaughter — is another option under consideration.… Zimbabwe officials claim the nation has a ‘surplus’ of elephants in Hwange National Park, but the international community is worried that wildlife populations are very unstable in [the country]. Federal agents are so concerned that the U.S. Fish & Wildlife Service has suspended ‘trophy’ hunting imports of elephants indefinitely.”

Elephants DC has appealed for action to the European Union, U.S. Senate, and officials with the U.S. Departments of State, Justice, and Interior. “There is an important petition to the White House that addresses what is needed on an international scale to help save these elephants and all African elephants,” says Samuel. The CITES Secretariat has stayed silent throughout the crisis. 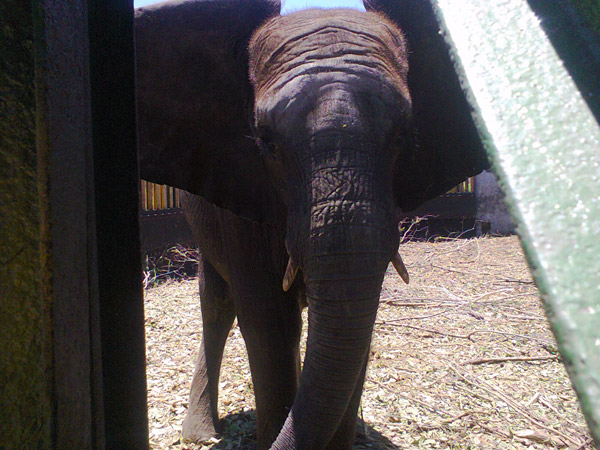 Wild elephant calf that has been separated from its mother and held in a guarded facility in Hwange National Park, Zimbabwe before shipment to a zoo or circus in China. Photo courtesy of ELEPHANTS DC.

Elephants Without Borders (EWB) stated that despite “present global efforts, campaigns and support to combat poaching, illegal wildlife trafficking and animal welfare, the world has remained largely silent about this issue that must be the most notorious case of wildlife abuse in recent history.”

EWB founder and biologist Mike Chase severely criticized Zimbabwe’s method of addressing wildlife conservation through the international trade of baby elephants. He asserted that: “Capturing wild elephant calves is counterintuitive to raising funds for conservation. It is a gross violation of animal welfare and might repel would-be visitors to a national park that has an exemplary ecotourism reputation.”

Wildlife experts assert that the value of revenue gained from the sale of baby elephants will be far outweighed by the damage done to Zimbabwe’s image and to its tourism, especially regarding visits to Hwange National Park. Reports of the calves’ seizure has unleashed a fierce online reaction by wildlife organizations, individual bloggers and in social media — all are clamoring for an end to Zimbabwe’s wildlife trafficking.