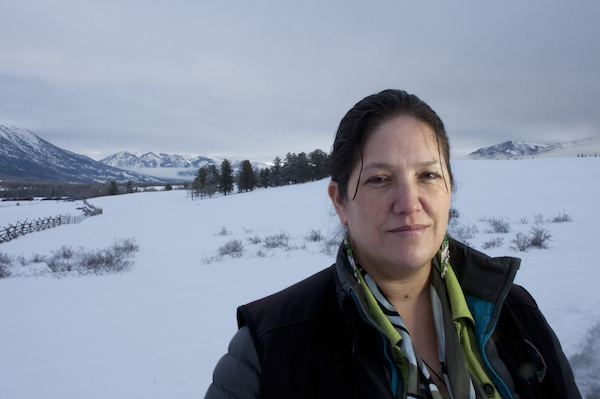 When a huge open-pit mine threatened a pristine lake and surrounding forest in British Columbia, Canada, Marilyn Baptiste jumped into action, spearheading efforts to collect environmental impact data and even physically turning away construction crews. Because of her efforts, the Canadian government rejected the mine, leaving wild a part of the Canadian Rockies upon which First Nations communities have depended for generations. Today, Baptiste was honored for her work when she was presented the 2015 Goldman Environmental Prize at a ceremony in San Francisco.

Nemiah Valley lies near the middle of southern British Colombia, about 150 miles (240 kilometers) northeast of Vancouver. Nestled in the shadows of the Chilcotin mountain range, Nemiah’s forests, lakes, rivers, and wetlands are home to First Nations communities, as well as species like sockeye salmon (Oncorhynchus nerka) and grizzly bears (Ursus arctos horribilis). The region also serves as the headwaters for the Fraser River, a major Canadian waterway. But for the past few years part of Nemiah Valley has been under threat as a mining company set its sights on an underlying copper-gold deposit, the largest in the country.

Vancouver-based Taseko Mines Limited (TML)’s project, dubbed “Prosperity Mine,” was to be one of British Columbia’s largest-ever mines. To target the deposit, a low-grade mixture of copper and iron ore measuring 1,500-by-800 meters and extending to a depth of 880 meters, TML planned a huge open-pit mine that would require the draining of nearby Fish Lake.

This did not sit well with Marilyn Baptiste, former chief of the Xeni Gwet’in First Nation. For the Xeni Gwet’in, Fish Lake and the land surrounding it is sacred, a resource from which they gather food, water, and medicine. As Baptiste told the Aboriginal People’s Television Network (APTN), not only would the mine have destroyed the lake, but forest would need to be cleared to make room for roads, transmission lines, and other infrastructure.

“That is a tremendous amount in destruction of our wetlands in the territory,” Baptiste told APTN.

A former chief of the Xeni Gwet’in First Nation, Marilyn Baptiste led her community in defeating one of the largest proposed gold and copper mines in British Columbia that would have destroyed Fish Lake—a source of spiritual identity and livelihood for the Xeni Gwet’in. Video courtesy of the Goldman Environmental Prize.

In January, 2010, British Columbia’s provincial government gave TML the go ahead to start mine development – before an environmental review was conducted by the federal government. In response, Baptiste led a First Nations charge in investigating the environmental impacts an open-pit mine would have on the region, gathering information from tribal chiefs and elders, as well as scientists. Their findings were presented at Canadian Environmental Assessment Agency (CEAA) hearings and were incorporated into their report.

According to the CEAA report, Prosperity Mine would have negative impacts on both wildlife and human communities in the area. It asserts mine development would kill Fish Lake’s population of approximately 90,000 rainbow trout, prevent trout and salmon migration through different waterways, and bar the Xeni Gwet’in from accessing and using land on which they’ve depended for generations.

The report also asserts consequential forest degradation due to the mine would supplant valuable habitat for grizzly bears and other species.

“While the Project would result in a relatively small loss in habitat, it would contribute to a further decline of the present situation,” the report states. “Logging is expected to continue to affect habitat in the area due to the increased harvesting in response to the mountain pine beetle infestation. This would place even greater pressure on the remaining bear habitat in the South Chilcotin region.”

Indeed, Global Forest Watch shows the region of Nemiah Valley surrounding the mine site lost more than 6 percent of its tree cover from 2001 through 2013. 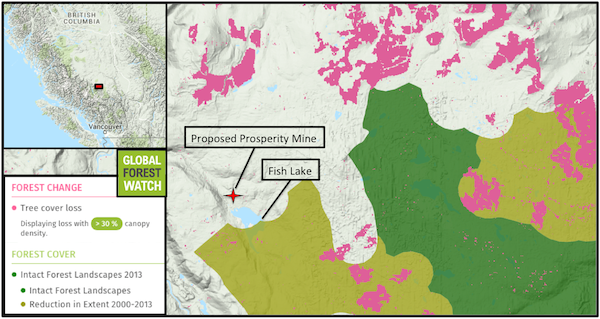 The proposed Prosperity Mine site is located near Fish lake, about 150 miles across the mountains from Vancouver. Large tracts of Canada’s boreal forests have been deforested due in part to pine beetle infestations that is leading to massive tree die-off. However, the region surrounding the mine site still features intact forest landscapes – areas of undisturbed forest large enough to retain their original levels of biodiversity. Baptiste and other critics of the mine worried development would spur the constructions of roads and other infrastructure into the area. Click to enlarge.

In response to the CEAA report, the federal government rejected TML’s mining proposal in November, 2010. Jim Prentice, Canadian Environment Minister, called it “Scathing…the most condemning I have ever read.” However, the company regrouped and revised their bid, and began moving heavy machinery into the area in 2011. Bulldozers and trucks started caravanning down the road towards Fish Lake, but Baptiste was undeterred, initiating a one-woman roadblock and forcing construction crews to turn around and leave the area.

But not all left peaceably.

“And he drove right up to me, like as if he was going to run me over” Baptiste says in a short documentary about the campaign. “And that kind of was a little threatening. Didn’t bother me, but it’s just something we had to do.”

Taseko Mines Limited tried to get the provincial government to intervene and remove Baptiste and others who joined her in the blockade, but their request was rejected by the BC Supreme Court in December, 2011, which also issued an injunction banning TML from doing any mine development at the site. In 2014, their revised proposal was rejected by the federal government.

For her work to stop Prosperity Mine, Marilyn Baptiste was awarded the Goldman Environmental Prize for Outstanding Environmental Achievement in North America at a ceremony that took place today in San Francisco. The Goldman Prize is the world’s largest award honoring grassroots environmental activists. Each year, the prize jury selects a handful of people from around the world who have done remarkable environmental work. Baptiste, along with other 2015 winners, will each receive $175,000 to help them pursue their work.

As for Baptiste, she and other members of her community will continue working to permanently protect Fish Lake and its surrounding area by designating it as Dasiqox Tribal Park.

“Our elders and our children want these waters to remain clean and healthy for their great grandchildren to be also able to drink from [them],” Babtiste said.