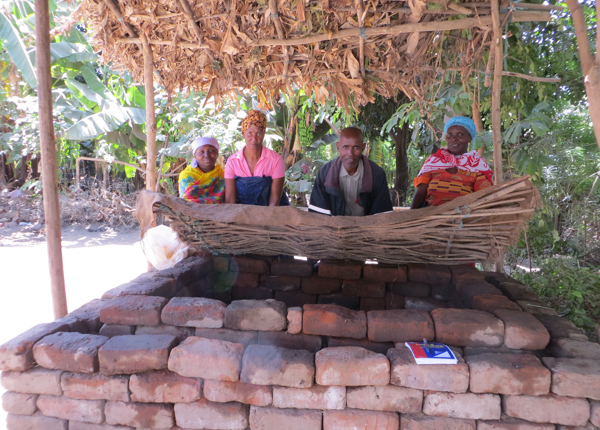 Members of a women’s group in Nduruma, Tanzania, stand over their zero-energy cool chamber, or ZECC. ZECCs can extend the life of fresh produce by a few days up to two weeks. Credit: Rachel Cernansky.

Outside Halima Sama’s house, children run around the dirt compound, kicking up the dust that blankets the region during the dry season. Nduruma, like many small villages in northern Tanzania, is filled with modest mud-based houses where farmers work the adjoining land to grow food for their families and the local market. But outside Sama’s and one other home in Nduruma, a brick structure about the dimensions of a large refrigerator turned on its side sits humbly in a patch of shade. It’s known as a zero-energy cool chamber, or ZECC, and it can help farmers improve the longevity of their produce.

With rudimentary means for storing, processing, and transporting crops, farmers and traders throughout sub-Saharan Africa may lose nearly half of their fruits and vegetables between the harvest and the point of consumption or sale, according to the UN’s Food and Agriculture Organization. A key technology that farmers lack is refrigeration.

The ZECC, which uses evaporation to cool its inner space relative to outside temperatures, offers a low-tech, low-cost version of refrigeration. Keeping the bricks wet is the only real maintenance it requires. Sama said she can keep produce a few days longer in it than she otherwise could. Certain unripe fruits, such as mangoes, keep up to two weeks longer. That makes a big difference, because otherwise she would have just a day or so to eat or sell her greens, and a few days for fruit. She and other farmers who use the ZECCs are happy with them. But the ZECC also showcases some of the challenges of reducing perishable crop losses in rural Africa.

The cool chambers are in Nduruma because of a group of local women farmers that Sama belongs to. Last year, some of them attended a training at the Arusha office of the World Vegetable Center, or AVRDC, a crop research and breeding organization based in Taiwan. They saw a ZECC on display there and, inspired, went home to build one. Their first attempt was a bust. They built it on ground that turned out to be unstable, and it collapsed about three months later. AVRDC staff came out to help them choose a better site and build a replacement. The group then helped another local women’s group build its own ZECC, for a grand total of two in Nduruma.

Outside of Nduruma, you’d be hard-pressed to find a ZECC on any farm in Tanzania. It may not make sense for everyone—but no one? “The technologies are out there, people know about them. But why people are not adopting them, I don’t understand,” said Ngoni Nenguwo, post-harvest specialist at AVRDC.

Behind the AVRDC office buildings sits the physical manifestation of much of Nenguwo’s work: the Postharvest Training and Services Center (PTSC). The whole point of Nenguwo’s job and the PTSC is to help reduce the percentage of crops that African farmers lose between harvest and the market. That work is largely technical: Nenguwo spends a lot of his time developing or identifying tools for resource-poor farmers in rural, electricity-free areas. But it’s also about education and culture, and that’s where the challenge might be steepest. 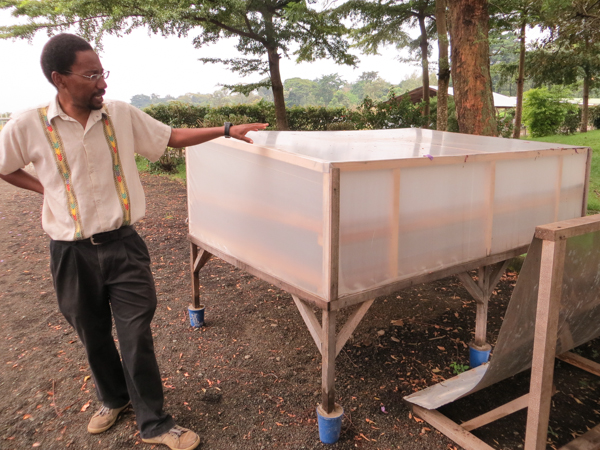 Ngoni Nenguwo explains how a solar dryer works at the Postharvest Training and Services Center in Arusha. Credit: Rachel Cernansky.

It’s also why the PTSC, open since 2012, still seems to be finding its way. The center is likely the first physical space dedicated to helping farmers reduce perishable crop losses in the area, and possibly in all of Africa. Without a model to follow, Nenguwo and his staff are experimenting to figure out what effective outreach and training look like. This is emblematic of the effort to reduce post-harvest losses globally. Because the problem itself has only recently come to the attention of development agencies and policymakers, most solutions are still to some extent in a pilot phase.

The PTSC is equipped with a small array of innovations for crop management, from the simplest shade structure to an insulated room rigged with an air conditioner that emulates a cool room for fresh produce. A ZECC and a shade structure are set up on a gravel path leading from AVRDC’s main office. A long open-air classroom runs parallel to three screen houses growing vegetables for the group’s research arm.

The center tries to connect with farmers on whatever level they can manage. Even if they have no money to spend, they can often benefit from learning about the simplest of food storage principles, such as keeping vegetables out of direct sun to minimize wilting. Nenguwo said that so far, the PTSC has trained about 18 groups of some 20 farmers each. As it expands its services and its reach, the center’s training program could turn out to be a model for others to follow.

Standing around their ZECC in Nduruma, Sama and other members of her group said they usually use it to store produce for their families. That surprised Nenguwo, who said he had expected them to collect produce in it to take to market. He shrugged, gesturing at the PTSC’s brick demonstration cool chamber. Either way, "the benefit to them is less waste,” he said.

“The Nduruma groups, we call them the early adopters. They were quite willing to take the risk,” he said. The ZECC is made from cheap, local materials, but it’s not free, and any investment is a risk for farmers with incomes as small and unstable as those in much of rural Africa. Nenguwo’s hope, and that of everyone working to reduce crop losses, is that once someone takes the first leap to try a new tool, everyone else can see it in action — and it starts looking less like a risk and more like a sure bet.