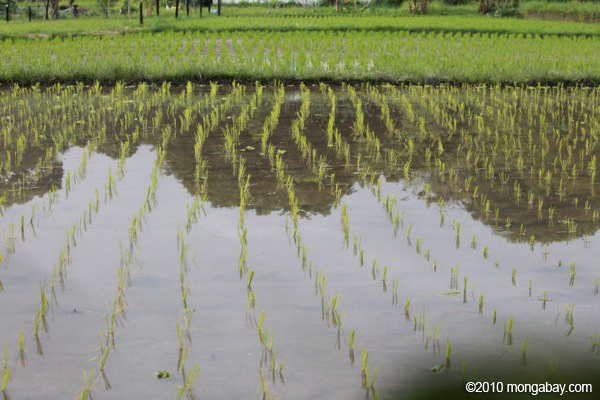 Indonesian civil society groups and experts welcome President Joko “Jokowi” Widodo’s campaign promise to redistribute nine million hectares of land to farmers – in principle. But they remain wary of what the program, whose details have yet to be made clear, might look like in practice.

These reservations were expressed at a discussion on the redistribution plan held in Jakarta on April 1.

“What’s the concept?” said Dwi Astuti, director of Bina Desa, an NGO. “Who will receive the land, where will it come from?”

These questions have not been fully answered. Officials have spoken only in general terms about the president’s “agrarian reform” agenda. In February, Environment and Forestry Minister Siti Nurbaya said Jokowi was exploring the possibility of increasing the average farmer’s holding from 0.8 hectares to two hectares.

At the discussion, activists and experts who theoretically backed the idea reminded the government to be careful executing it and voiced worries about how it might play out.

One fear was that the program would benefit businesspeople more than peasants. “Will the land go to landless people?” Dwi asked. “If the criteria for the subjects of land reform is unclear, the land could go to plantations rather than farmers.”

“If you only distribute land, that’s not land reform,” said Iwan Nurdin, secretary general of the Consortium for Agrarian Reform (KPA).

Agricultural expert Gunawan Wiradi made a similar point. He said he respected the government for giving access and opportunities to the people but dismissed the idea that it was full-on agrarian reform. “It’s not agrarian reform if land in Kalimantan is given to people from Java,” he said. “Reform is when the object and the subject are in the same place.”

Gunawan was referring to Indonesia’s transmigration program, a major initiative during the Suharto dictatorship which moved landless people from densely populated islands such as Java to less populous areas of the archipelago and has often caused social unrest.

Instead of moving people around, Iwan said, it would be more prudent to move state-owned companies. “For example, in Java there are many farmers who need land. If a state enterprise is moved, the land can be distributed to the people. That’s easier than moving people.”

Gunawan added, “If nine million hectares are handed out but nothing is done about investors who control many millions of hectares, that’s not land reform.”

Dwi pointed out a few other pitfalls. If land given to farmers was too close to an oil palm plantation, it might not be productive. He also brought up Indonesia’s land tenure issues. “You still haven’t resolved the land conflict problem, and suddenly you want to redistribute land?” he said. “How? Land redistribution without conflict resolution is not a good way to improve people’s welfare.”

Before land redistribution, Dwi said, the government should conduct an audit to determine which land is free of conflict.

He also said land reform should address not only class inequality but also inequality in the family by involving women. “For a household, land is usually registered in the name of the husband, with access and control in the hands of men.”