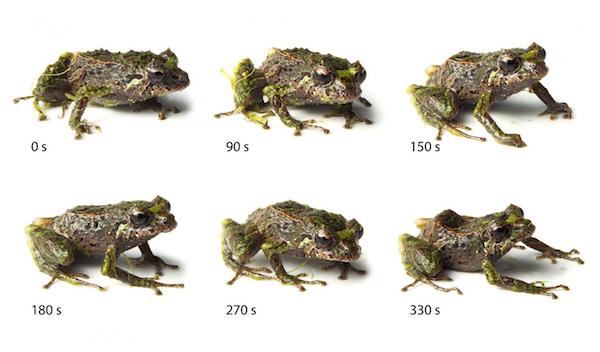 Skin texture variation in one mutable rainfrog (Pritimantis mutabilis), which changes from spiny at 0 seconds to smooth at 330 seconds. Photo courtesy of the Zoological Journal of the Linnean Society. Click to enlarge.

In 2006, a husband-and-wife team – Katherine and Tim Krynak – discovered a tiny new frog species, smaller than a U.S. quarter, in the Reserva Las Gralarias, a nature reserve in north-central Ecuador. They took its photograph and nicknamed it the “punkrocker” frog because of spine-like projections coming out of its skin.

For the next three years, they did not find the punkrocker again. But when they did re-discover it in 2009, the team found that the punkrocker had more tricks up its sleeve. The frog could change its skin texture in a matter of minutes, a talent the researchers had never seen in any other frog.

On one of their regular amphibian survey nights in 2009, Katherine Krynak stumbled upon the punkrocker frog in the Reserva Las Gralarias. Krynak and her husband picked up the frog, placed it inside a container, and added some moss to recreate a moist home for it.

“We routinely collect frogs we can’t easily identify in the field, bringing them back to the guesthouse and photographing them before returning them to the same location we found them,” Katherine Krynak, a PhD Candidate at Case Western Reserve University and a founding board member of Las Gralarias Foundation, wrote in a first-person account of her discovery for amphibians.org.

“I was particularly excited to get some good photos of this particular frog because it was absolutely gorgeous, with spiny tubercles all over its body,” she added.

The original “punkrocker” frog discovered by the Krynaks in Ecuador in 2006. Photo by Tim Krynak.

So the following morning, Katherine and Tim began photographing the frogs they had collected the previous night.

Katherine placed the frog she believed was the punkrocker on a smooth white board to photograph it. But then, Tim noticed something peculiar. The frog had smooth skin. The punkrocker frog they had photographed three years ago had numerous spiny projections on its skin.

Annoyed that she may have collected the wrong frog in the field, Katherine placed the frog back into its container and added some more moss to keep the frog moist.

“Tim and I had been searching for another one of these frogs for years now, and here I had picked up the WRONG frog!” Katherine wrote in amphibians.org. “I was angry at myself, and confused about how I could have actually done that. These frogs are fast—but not magical, I thought. Tim was disappointed too, but tried not to make me feel too bad. But I could tell he was frustrated.”

They were, however, in for another surprise. A few minutes later when they looked at the frog again, it was covered in spines.

“We couldn’t believe our eyes. We had never heard of a frog changing its texture,” Katherine wrote.

When they placed the frog on the smooth white board again, its spines began disappearing quickly. It was then that the duo knew that they had chanced upon not only a new species, but a species that could change its skin-texture based on the environment it was in, an ability called phenotypic plasticity. For Katherine, it almost seemed magical.

The Krynaks collaborated with other amphibian specialists, analyzed the frog’s morphology and genetics, and found that the frog was indeed a species new to science. Based on its ability to rapidly change its skin-texture, they named the punkrocker the mutable rainfrog (Pristimantis mutabilis). The team published their findings in the Zoological Journal of the Linnean Society last month.

Mutable rainfrogs are small, about 17 to 24 millimeters (less than an inch) in size, and can be found in the epiphytes, moss and other vegetation of the montane cloud forests of the Andes in Ecuador. The species also has three unique songs that separate it from other species of the Pristimantis genus. The frog is known only from two populations so far, and the authors suggest placing it in the “Data Deficient” category of the IUCN Red List.

The mutable rainfrog was the first of its kind to be discovered. But it turns out it’s not the only frog capable of changing its skin texture based on its environment.

Soon after discovering the shape-shifting trait in the mutable rainfrog, Tim Krynak of the Cleveland Metroparks, and Carl Hutter from the University of Kansas, independently discovered this trait in another, closely related, but much larger frog – the Sobetes robber frog (Pristimantis sobetes). The Sobetes robber frog, currently listed as Endangered in the IUCN Red List, is known from only a handful of localities in Pichincha Province in Ecuador. 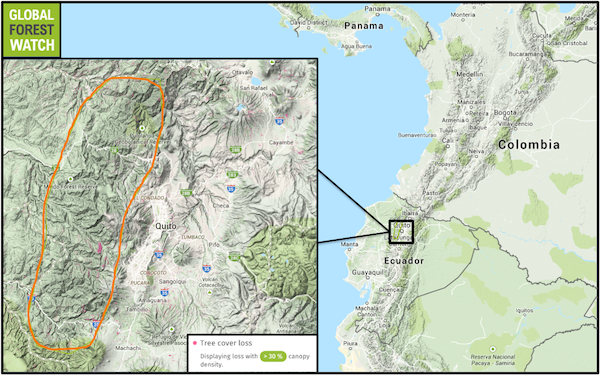 The mutable rainfrog (Pristimantis mutabilis) and Sobetes robber frog (P. sobetes) are found in the Andean cloud forests above Quito (broad range indicated by orange oval). Not enough is yet known about the mutable rainfrog to determine its conservation status, but the IUCN lists the Sobetes rubber frog as Endangered because it has only been found in a few places within its range, and its forest habitat is threatened by clearing for livestock farming and timber. According to Global Forest Watch, the region encompassing the known range of both species lost approximately 2,250 hectares — 1.2 percent — of its tree cover between 2001 and 2014. Click to enlarge.

This frog is not a newly discovered species. Yet, no one had known of its ability to shape-shift like the mutable rainfrog.

This is because no one had ever described such a trait in an amphibian before, Katherine Krynak told mongabay.com. “And therefore looking for such a phenomenon just wasn’t done.”

In fact, the researchers note that this newly-discovered trait in frogs might actually be rare, or may have simply been undocumented so far.

There are some other frog species in which the males change their skin-texture during the breeding season, temporarily gaining barbs, glands or other features on their skin. These are mostly used for sexual selection or territory defense, the authors write in the paper, which is different from what the mutable rainfrog or Sobetes robber frog can do.

The first difference is that the latter can change their skin texture in minutes. The second difference, according to the authors, is that the function of the skin-texture changing trait in the mutable rainfrog or Sobetes robber frog may have more to with environmental camouflage than reproductive function.
How the frogs achieve this rapid shape-shifting is still a mystery, Katherine Krynak said. “But Juan Guayasamin is currently working on this investigation.”

The discovery of this trait could change the way taxonomists work. Amphibian taxonomists have traditionally depended on skin texture, and the presence or absence of wart-like features on the skin to identify and describe new amphibian species. So the discovery of this shape-shifting trait could pose a challenge for those that working with few preserved specimens, the authors write.

“The finding of P. mutabilis and the amazing shape-shifting ability highlights our limited knowledge of the natural world,” Katherine Krynak said.

She added, “As this story indicates, when describing species it is important to include multiple measures including morphology, behavior, as well as genetic analyses. The problem is that amphibians are disappearing so rapidly that we are often left describing species from museum specimens, and therefore are unable to capture such behavioral traits.”