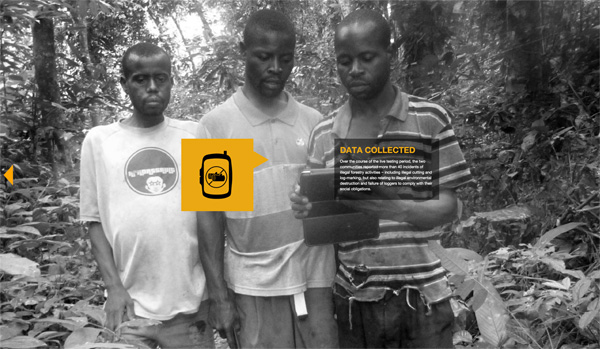 Communities in the Central African rainforest can now report illegal logging in their territories as it happens, potentially enabling real-time law enforcement action.

The system, developed in a partnership between Rainforest Foundation UK (RFUK) and Forêts et Développement Rural (FODER), enables users to collect information on a tablet or smart phone and rely the data via a satellite modem transmitter, eliminating the need to be connected to a conventional mobile network. Transmission cost is roughly the same as a text message, according to RFUK.

“Our ‘real time’ technology is potentially a game-changer, as it helps empower forest people even in the remotest areas, and could transform the way that forests are monitored and governed,” said RFUK Executive Director Simon Counsell in a statement. “It can be an important and cost-effective complement to satellite-based monitoring, providing ‘crowd-sourced’ qualitative data.”

RFUK and FODER recently conducted a trial with two communities in the forests of Cameroon, finding 20 potential incidences of illegal logging. Because it was a pilot, the illegalities weren’t reported to authorities, but the functionality of the system was shown to work, leading RFUK to open field tests to other regions.

“We are inviting governments of rainforest countries to work with us on a full-scale test of how community-based monitoring can be linked to formal enforcement mechanisms,” said Counsell, adding that the system could be adapted to other types of forest monitoring, including wildlife spotting, detecting poaching, and reporting human rights abuses.

RFUK’s system emerged out of its participatory mapping program, which it developed to help communities strengthen land tenure and secure territories against encroachment. 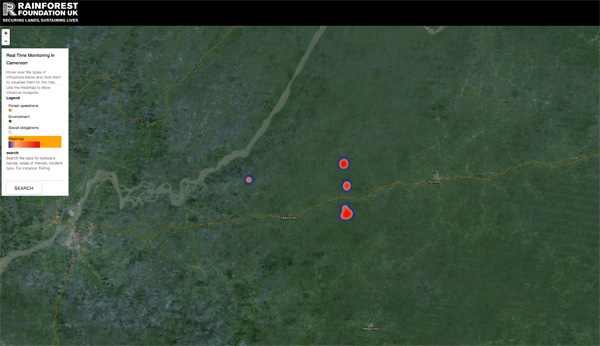 The system isn’t the only illegal logging detection platform being field-tested in Cameroon. Rainforest Connection, a U.S.-based start-up, has been running a pilot that uses recycled cell phones to listen for sounds associated with logging and poaching, including the crack of gunshots and the buzz of chainsaws, in places where such activities are off limits. Rainforest Connection’s system then relays an alert to local authorities or conservation managers. Other conservationists have been testing drones and sensors to achieve the same goals.

The efforts are important because the region around RFUK’s pilot sites has been losing more than 2,000 hectares of forest a year since 2000, according to data from Global Forest Watch.