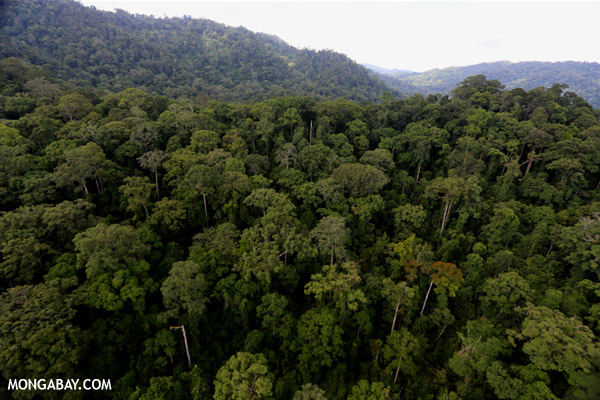 Rainforest in Sabah, Malaysian Borneo. Photo by Rhett A. Butler.

In early March, scientists with the University of Maryland and NASA made an incredible announcement: they had discovered that vast clouds of mineral-rich dust blow from the Sahara Desert in North Africa and cross the Atlantic Ocean to enrich the soils of South America’s Amazon rainforest.

As awe-inspiring as this news is, the more we learn about the interconnectedness of all living systems, the more we are confronted with the possibility that the things humans do to one ecosystem may have far-reaching impacts that we’re only beginning to understand.

Late last year, for instance, a study published in Nature Climate Change found that tropical deforestation could be shifting rainfall patterns across the globe, which has major implications for agriculture not just in the immediate area but even far from where the forest loss has occurred.

Now a study published in the journal Atmospheric Chemistry and Physics finds that industrial activities in East Asia are polluting the air in the rainforests of Borneo and that, once there, the pollutants could be traveling into the upper atmosphere and impacting Earth’s ozone layer.

Led by Matthew Ashfold of the University of Nottingham Malaysia Campus, the researchers were originally attempting to test a hypothesis that oceans are a significant source of various bromine and chlorine compounds that might play a role in the chemistry of the ozone layer. There was almost no data for them to go on, however, so they set out devices to measure these naturally occurring gases. Air samples from two different locations in Borneo’s rainforests also contained perchloroethene, or perc, which does not come from natural sources but from a variety of industrial and commercial activities, including dry cleaning and metal degreasing.

“The instrument we used was also able measure chlorine-containing gases with anthropogenic sources, such as perc – and we noticed large variations that were the first indication of an anthropogenic influence,” Ashfold told mongabay.com.

The team used a UK Met Office computer model of atmospheric transport to conclude that the origin of the air samples they collected in Borneo was East Asia. During the northern hemisphere’s winter, pockets of cold air can move as quickly as 1,000 kilometers (621 miles) per day across Asia towards southern China, where it then proceeds into the South China Sea. These “cold surges” most likely carry air pollution from countries like China to Southeast Asia and the rainforests of Borneo, according to Ashfold.

The team foud perc levels in the forest fluctuated, likely the result of air pollution in East Asia and changing wind patterns. Another effect of industrial emissions, global warming, might be playing a role, as well. “The most probable causes of this type of impact are actually increasing emissions of the pollutants in SE Asia itself, and changes in weather patterns as a result of climate change,” Ashfold said.

While ozone is toxic to plants and humans, it’s not generally a problem in forests and may not pose much of a risk even in the elevated concentrations induced by the cold surges out of the East.

“In very general terms, high levels of ozone damage many types of plants,” Ashfold said. “However, ozone concentrations within tropical forests are typically very low, so even the increases that might happen when winds blow strongly from East Asia are not necessarily damaging.”

The levels of perc the researchers found may have been low, but they are still troubling because they could indicate the presence of other air pollution, such as carbon monoxide or ozone. Which means that, aside from lowering air quality in Borneo’s rainforests, the rapid transport of East Asian air pollution to Southeast Asia could pose a risk to the planet’s ozone layer.

“If a pollutant has a short (