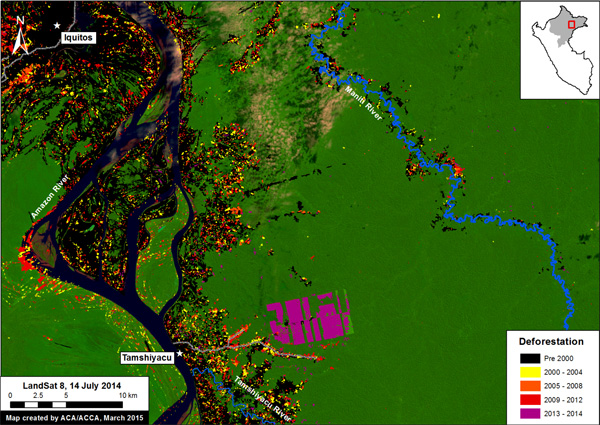 MAAP image of the week #2: Deforestation by United Cacao for eventual chocolate production in Peru.

A new platform will provide critical near-real time information and analysis on emerging threats to forests in the non-Brazilian Amazon.

Officially announced today, the Monitoring of the Andean Amazon Project (MAAP) in an initiative launched by the Amazon Conservation Association and Conservación Amazónica-ACCA. The platform allows the public to scrutinize activities in the Earth’s most biologically diverse forest: the Western Amazon of Bolivia, Colombia, Ecuador, and Peru.

“The ultimate goal of MAAP is to distribute important technical information in a timely manner and in an easy-to-understand format in both English and Spanish,” states the MAAP web site. “Our intended audience is policy makers, civil society, the media, and the public at large. We hope that sharing such information with these actors will contribute to changes in policy and practice that minimize future deforestation and promote conservation in the Andean Amazon.”

Underlying the map is CLAS-lite, a powerful tool for mapping change in forest cover, including both outright clearing (deforestation) and forest diminishment from logging and other activities that don’t completely strip tree cover (degradation). The map also uses other data sources including deforestation alerts from WRI’s Global Forest Watch and Terra-i. 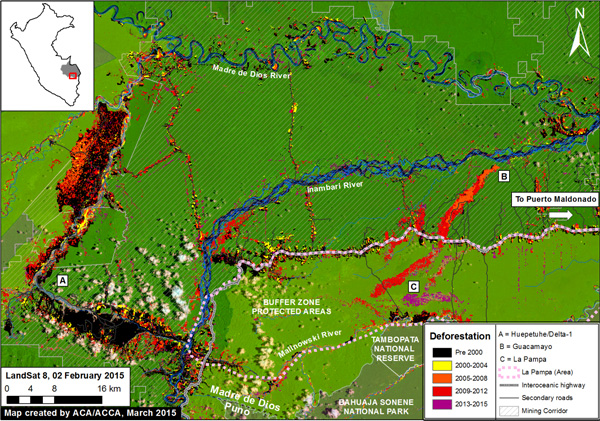 MAAP image of the week #2

To catalyze interest and action, MAAP will regularly post an “Image of the Week” that looks at issues like mining, logging, oil palm plantations, industrial agriculture, roads, hydroelectric dams, oil and gas development, and coca cultivation. The first two spotlighted images show damaging gold mining in Peru’s Madre de Dios and the destruction of biodiverse rainforest by the Peruvian subsidiary of United Cacao, a publicly-listed company, for a cacao plantation. Using high resolution satellite imagery, the latter profiles the step-by-step conversion of rainforest by the cacao company, undermining United Cacaos’s claims that its operations didn’t involve tree-clearing. The article notes that other companies linked to the same owner appear to be preparing to clear a much larger area of forest for oil palm plantations.

The platform is part of growing wave of forest monitoring tools being developed by civil society groups. Global Forest Watch, launched last year, is the largest such platform, but there are other portals looking at specific geographies like the broader Amazon (InfoAmazonia) and Malaysian Borneo (Sarawak Geoportal), among others. The transparency tools are helping environmental groups, the media, communities, and the public to hold companies and governments more accountable for forest management and conservation.