Overfishing leads to crashes in sardines and other forage fish 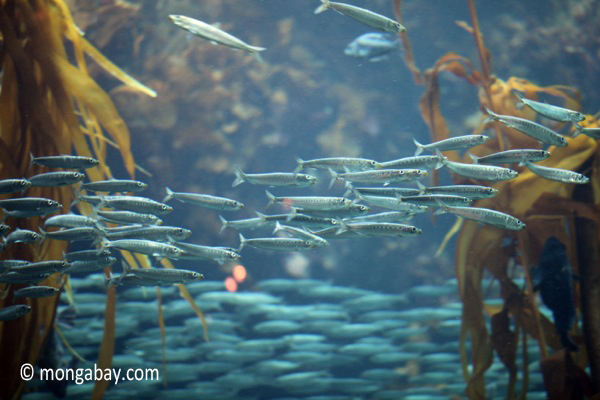 Pacific sardines swim through a kelp forest. The species crashed in the 1950s. After rebounding in the 1990s and 2000s, its numbers have plummeted once again. U.S. managers will soon decide whether to shut down fishing for the species. Credit: Rhett Butler

Some of the smallest fish in the sea play an outsize role in marine ecosystems. Populations of sardines, anchovies, and other so-called "forage fish" have undergone stupendous crashes whose effects ripple outward across the food web. New research shows that overfishing has caused or worsened these crashes and suggests some simple tweaks to fisheries management that could help fishermen and fish alike.

"If you mess up the fishing of forage fish, the fish lose, the fishermen lose, and then all of the suite of predators that depend on them also lose," University of Washington fisheries scientist Timothy Essington told mongabay.com.

Forage fish are essential food for bigger predators, including many commercially important species. People also fish them relentlessly, not so much to eat them, but to turn them into fishmeal and fish oil for livestock, chicken, and aquaculture production. In spite of their frequent population booms and busts, forage fish account for 30 percent of all the marine fish caught each year. The fish swim in huge schools, so fishermen can still catch plenty even when their overall numbers are low.

The big population fluctuations have made it difficult for scientists to tease out the roles fishing and natural cycles may play in causing the crashes. Does fishing merely hasten natural crashes, or does it also make the crashes worse? In a search for the "fingerprint of fishing" in forage-fish population cycles, a team led by Essington studied 55 fish stocks that had at least 25 years of available stock assessment data. The researchers focused on seven species that together account for about two-thirds of the global forage-fish catch each year: anchovies, capelin, herrings, mackerels, menhaden, sand eels, and sardines.

In a study published yesterday in the journal Proceedings of the National Academy of Sciences, Essington’s team found that stock collapses were more frequent than expected based simply on natural cycles. They were also more severe: on average the crashes resulted in stocks having 44 percent less biomass than expected if natural population dynamics alone were the cause. Fishing "makes the troughs in the population cycles quite a bit lower than you would expect otherwise," Essington said.

To determine why, the team took a closer look at a subset of 15 of the stocks that had crashed, for which they had especially rich data. Fishing of these stocks was exceptionally intense prior to the crashes, and didn’t let up until after the fish had bottomed out. The team determined that 11 of the 15 stocks would not have collapsed at all were it not for fishing pressure, and that the post-crash stocks would have had six times more fish biomass on average than they actually did if the fishermen had stowed their nets during the years immediately before the collapses.

"The recipe for these really profound collapses [was] a natural drop in productivity coupled with a delay in the management response," Essington said. "The population is going down and people don’t know it quickly enough, so people are catching too much given the population size. Basically, at exactly the moment where in a perfect world you’d want to be hitting the breaks on fishing, instead we’re hitting the accelerator by mistake."

At a weeklong meeting that starts Friday, U.S. fisheries managers will decide whether to shut down fishing for the Pacific sardine (Sardinops sagax caerulea). The species, which was the focus of the California canning industry that John Steinbeck described in Cannery Row, crashed disastrously in the 1950s and stayed down for four decades. After rebounding in the 1990s and 2000s, the stock is declining once more, from an estimated high of 1.4 million metric tons of living fish in 2006 to the most recent estimate of 133,000 metric tons at most, according to the Associated Press.

Essington said oceanic conditions are probably mainly to blame for the Pacific sardine’s crash, but the necessary data has not been released for him to evaluate whether fishing ramped up in recent years. What is unique is that managers had already established a population threshold (of 150,000 metric tons) below which fishing would be halted, so the decision about whether to close the fishery should be straightforward.

In their study, Essington’s team proposes a simple solution along those very lines: stop fishing when a stock’s biomass declines below half its average level. Otherwise, continue fishing at current levels. Doing so would have reduced the number of crashes in their data set by almost two-thirds, the team calculated. It would also have reduced the severity of any crashes that did occur: crashed stocks’ biomass would have been 80 percent higher than observed levels.

Fishermen wouldn’t even have to sacrifice much by adhering to this rule: their average catches would have gone down by a scant 1.7 percent, according to the study. That’s because they don’t catch much anyway when the stocks are at their lowest, and the closures let the fish return more quickly. The rule would have to be fine tuned stock by stock, and fishing cut-off thresholds would need to be set when fish are plentiful rather than in the heat of a crisis, but the principle should hold, Essington said.

"It just says ‘Tread lightly when you think you’re near the edge of the cliff,’" he said. "Our realization that things are bad can happen really quickly."