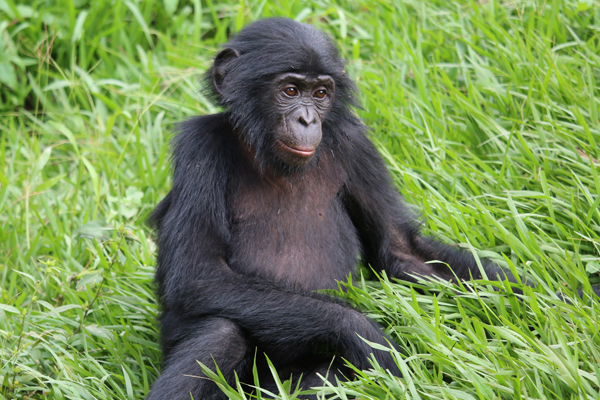 Of the world’s six species of great ape (not including us), it’s safe to say that bonobos (Pan paniscus) are the least studied and least known publicly. But a new organization, the Bonobo Project, is hoping to change that.

“The mission…is to elevate the status of the endangered bonobo and coordinate activities to aid in the conservation of this peaceful, female-dominated great ape,” Ashley Stone, the president of the Bonobo Project told mongabay.com in a dual interview with bonobo expert, Claudine Andre. “We seek to educate the public with a grassroots PR campaign, and engage a few key celebrities and conservation organizations to help us amplify the plight of bonobos.”

To the untrained eye, a bonobo looks little different from their closest relative, the chimpanzee. But the differences between these two cousins—separated only by the Congo River—are actually quite large. Primatologists have discovered that bonobos largely solve conflict through peaceful means, including sex, rather than violence and war, as chimps often do. Moreover, bonobo society is run by females—matriarchal—instead of males—patriarchal—like chimps. Still, the two great apes, both in the genus Pan, are united in the same threats: habitat destruction and the bushmeat trade.

“It is helpful that the Congolese government has a law against hunting and selling bonobos, and that it is enforceable by fines and time in prison, but it is difficult to successfully challenge the bushmeat trade,” said Claudine Andre, the head of Lola Ya Bonobo, the world’s only bonobo sanctuary and the only institution to successfully release bonobos back in the wild. “Bonobo populations are believed to be still declining.”

Bonobos are currently listed as Endangered by the IUCN Red List. Conservationists have estimated that perhaps the total population numbers 29,000-50,000, but no one really knows for sure A recent study estimated that only 27.5 percent of potential bonobo habitat remained suitable. The time seems ripe for a larger profile for the threatened great ape, and Stone, who has partnered with Andre, said the Bonobo Project is willing to work with “any organization or project whose mission is to preserve bonobos, from conservationists, to researchers, to zoos supporting public education and conservation of bonobos in the wild.”

AN INTERVIEW WITH ASHLEY STONE AND CLAUDINE ANDRE 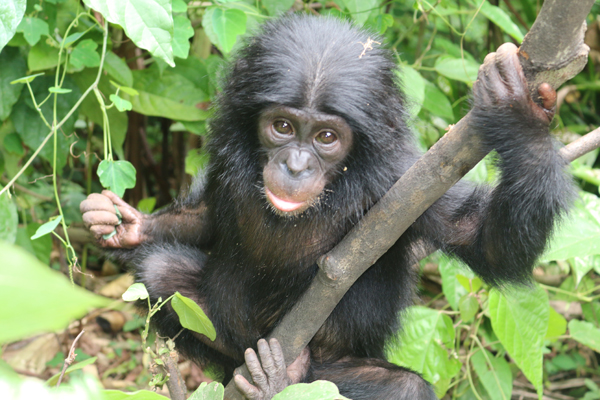 Ashley Stone: I grew up in Stone Mountain, Georgia and went to Emory University. After graduating, I taught English in Japan for one year, then moved to San Diego and earned a Masters Degree in Social Work in 1999. I worked with foster families for several years and then with an international adoption agency. In the end, however, I dedicated my time to raising my three children and doing volunteer work in San Diego and for Heifer International.

Mongabay: What first drew you to bonobos?

Ashley Stone: Animals, especially great apes, have always fascinated me. I took several anthropology classes while at Emory University with Dr. Frans de Waal and was struck by the intelligence and uniqueness of bonobos. They are absolutely fascinating and when you look at a bonobo directly into his or her eyes, you see a pureness, a sense of instinctual intelligence that maybe we’ve lost a little bit through our own evolution.

Claudine Andre: I was three years old when I moved to the Congo with my family because my father was a civil servant veterinarian in Belgian Congo. I loved all animals and nature because my father was the first ecologist I knew and he always explained everything to me. But my first encounter with a bonobo was at the closed down Kinshasa Zoo in 1993 during a difficult political time in Congo. I went to the zoo to save the animals and help the zookeepers and after several months, a man came to the zoo with what he thought was a dying, orphaned chimp baby. I came to learn that this was in fact a baby bonobo from the director of the zoo, and he said that they never survive in captivity as young orphans. It was from this moment that I set my sights on doing something that hadn’t been done before. In order to keep the baby bonobo alive, I had to treat him like a baby human infant. He was with me all of the time, even when I had to shower and after a couple of weeks, I believe he transferred the love he had from his mother to me and began to thrive. And more than 20 years later, I have taken in over 120 bonobos and released 16 bonobos back into the wild.

Mongabay: What makes bonobos distinct from their more well-known relatives, the chimpanzees?

Ashley Stone: Bonobos are impressive in so many ways. I find them compelling because they offer us hope in a world full of conflict and clashes. Along with the chimp, bonobos are our closest living genetic relative (98.7 percent the same DNA), but their societies are managed completely differently. Where chimps are male dominated and tend toward aggressive group management, bonobo societies function mostly peacefully with female alliances taking the leadership roles. Bonobos are known as the “Make love, not war” ape because they ease tensions within their own groups and even between different groups through sexual contact. Also, bonobos cooperate, they show tremendous empathy and they share, even with stranger bonobos. We humans can look to our bonobo cousins for inspiration if we strive for more peaceful, empathic, and accepting societies.

Mongabay: What are the major threats to bonobos today?

Claudine Andre: Human presence, and all of the problems we create, is the major threat to bonobos. We must learn how to live in harmony with our cousins and natural environments. It is helpful that the Congolese government has a law against hunting and selling bonobos, and that it is enforceable by fines and time in prison, but it is difficult to successfully challenge the bushmeat trade. Bonobo populations are believed to be still declining.

Mongabay: What is the mission of your new organization, the Bonobo Project?

Ashley Stone: The mission of The Bonobo Project is to elevate the status of the endangered bonobo and coordinate activities to aid in the conservation of this peaceful, female-dominated great ape. We seek to educate the public with a grassroots PR campaign, and engage a few key celebrities and conservation organizations to help us amplify the plight of bonobos.

If and when we are successful, we hope to create a fund for bonobo conservation, where we can assist those stakeholders already passionate about saving bonobos and encourage others to join the conservation effort. In addition, we hope to engage the governmental and financial systems in the U.S., the DRC, China and elsewhere who can influence conservation on a large scale. Real impact will only come from meaningful actions to preserve biodiversity at every level, from the Congolese living in and amongst bonobos in the Congo Basin to the presidents of countries and CEOs of major corporations benefiting from the region.

Mongabay: What sorts of organizations, projects do you hope to help bring attention and funding to?

Ashley Stone: Any organization or project whose mission is to preserve bonobos, from conservationists, to researchers, to zoos supporting public education and conservation of bonobos in the wild, to Lola Ya Bonobo (the only sanctuary in the world for bonobos in Kinshasa, DRC).

Mongabay: Claudine, will you tell us about Lola Ya Bonobo? 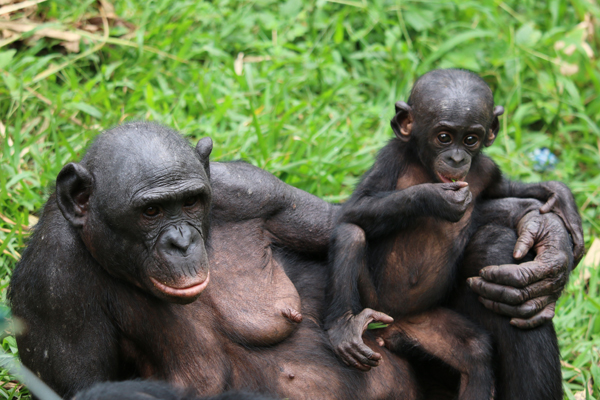 Elder and young bonobo. Photo courtesy of Lola Ya Bonobo.

Claudine Andre: In 1996, I was using the The American School of Kinshasa (TASOK), which had been closed, to house the orphaned bonobos. But in 2001, I had to leave that space because a peace treaty had been signed and the students were expected to come back. I had to find a different space for the 20 bonobos that had come to me by then, and by great fortune, persistence, the support of my family, and generosity of WSPA (World Society for the Protection of Animals) and others, I was able to purchase the 75 hectares of forest that is now known in Lingala as “Lola Ya Bonobo” or in English, “Paradise for Bonobos.” In 2002, the land was ready for us to move the bonobos. In 2007, I began the process to begin releasing bonobos back to the wild, and next month, “Bonobos: Back to the Wild,” the movie about this whole journey will be released here in the U.S.

Mongabay: You have released orphaned bonobos back in the wild. How are these groups faring?

Claudine Andre: They are doing great, living free as bonobos should. It was an incredible moment for us to see how they would do on their own because this type of release had never been done before. The first night, when they began to make their own nests in the canopy, we knew they would be OK.

Mongabay: Why do you think bonobos are lesser known than the world’s other great apes?

Ashley Stone: The standard reasons are because they weren’t identified as a separate species from chimps until 1929 and the folks researching them have been few and far between because of the civil wars and political unrest in the DRC over the last five decades. Also, bonobos only live in the Congo Basin in the DRC, which isn’t exactly a vacation destination, so they aren’t accessible to the average person.

But, it might also be that we are uncomfortable seeing and do not fully understand bonobos’ sexual behavior, therefore they aren’t promoted as much. Clearly, what we can learn from them should outweigh our own modesty. I am hopeful that we can see bonobos for the amazing creatures that they are, and that we can overcome the issues that have kept bonobos out of the limelight to date.

Mongabay: What gives you hope for the future of this species?

Claudine Andre: I have hope that the coordination of humanitarian affairs and conservation efforts will result in a positive future for bonobos. I also hope for the education of all of our children to take care of the last of this unique great ape and the surrounding biodiversity.