The blue-bearded helmetcrest (Oxypogon cyanolaemus) is a spectacular hummingbird. It is aptly named for the blue streak of feathers on its chin and a pointed crest on its head resembling a knight’s helmet.

Equally spectacular to the species’ physical appearance is its physical disappearance and reappearance.

No one had seen a single living blue-bearded helmetcrest since 1946, and the species was known only from preserved museum specimens. But that all changed last month when researchers rediscovered the bird in the mountains of Colombia.

How did such a spectacular animal go missing for almost 70 years? The blue-bearded helmetcrest is endemic to the Sierra Nevada de Santa Marta mountain range along the coast of northwestern Colombia. It lives in rugged high elevation habitat that is seldom visited by birders according to Dr. Paul Salaman, an ornithologist and expert on the birds of Colombia. The habitat of the species is officially protected as both a National Natural Park and as a reserve for the use of the indigenous people who live in the mountain range.

The last known record of the species was in 1946 when 23 individuals were collected for the Smithsonian. Dr. Salaman notes that there had been at least six expeditions to find the blue-bearded helmetcrest alive in the wild over the next several decades, none of them successful.

Carlos Julio Rojas and Christian Vasquez are staff of Fundación ProAves, a Colombian conservation group that helps manage the protected areas in the Sierra Nevada de Santa Marta. One of the major conservation issues in these mountains is the burning of natural habitats by the local people to create foraging areas for cattle and pigs. Rojas and Vasquez were monitoring and recording fire damage when they made the first official sighting of the blue-bearded helmetcrest in more than half a century.

In their paper announcing the discovery of the bird, published in Conservación Colombiana, Rojas and Vasquez write “CJS [Carlos Julio Rojas] saw a small bird move quickly past him and perch on a bush nearby. He took a quick photograph of it before it flew off. The photograph on the camera screen revealed the striking plumage of the long-lost blue-bearded helmetcrest.”

Rojas and Vasquez describe in their paper how they documented the bird and its habitat. “We then decided to set up camp and for the next two days conducted observations around the area. We documented a total of three individuals of the helmetcrest within three tiny scattered patches of habitat on steep hillsides and surrounded by the remains of burnt vegetation, all in an area of less than 10 hectares.” The exact location of the blue-bearded helmetcrest and its habitat is being kept secret to discourage disturbance of the birds. The species is currently listed as Critically Endangered by the IUCN.

Rojas and Vasquez write that the conservation status of the newly re-discovered hummingbird is very precarious. While the habitat of the species is fully protected on paper, they say on-the-ground enforcement of those protections is lax.

“It is crucial that fires are stopped immediately and that cattle and pigs are removed from the highest elevations of the Santa Marta mountains to allow the fragile páramo (high elevation grassland) ecosystem to recover,” the study states. “If this is not done, this unique hummingbird and equally rare plants which comprise its habitat could become extinct.” 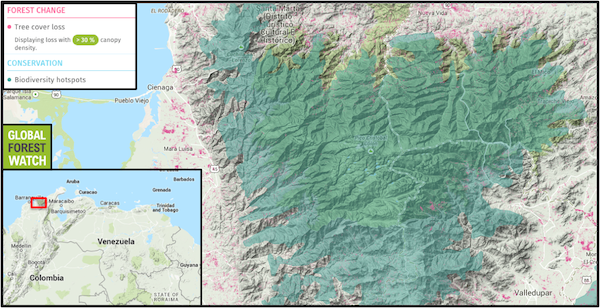 According to Global Forest Watch, the area comprising the Sierra Nevada de Santa Marta mountain range lost nearly 3 percent of its dense tree cover (where more than 30 percent of the ground is covered by forest canopy) from 2001 through 2013. This, despite much of the area being designated a “National Natural Park.”Click to enlarge.

Dr. Paul Salaman, an expert on Colombian birds, is not optimistic about the future of the blue-bearded helmetcrest.

“Chances of extinction within 10 years are extraordinarily high,” he said in an interview with mongabay.com. He cautions that overlapping national park and indigenous reserve designations theoretically protects the habitat of the re-discovered species, but this legal protection means little in the real world. “Don’t think that just because indigenous communities protect species on paper that it really is protected. Conservation groups need to help build management plans.”

Rojas and Vasquez’s rediscovery of the long-thought-lost hummingbird seems like it might be a cause for celebration in the ornithological community; but to Dr. Salaman, it is bittersweet.

“In the hummingbird community this is an exceptional discovery,” he said, “and also a very sad one.”