Soy field in the Brazilian Amazon. Again this year, Brazil has the highest number of murders of environmental and land defenders. Photo by: Rhett A. Butler.

The assassination, murder, and extrajudicial killing of environmental activists rose by 20 percent last year, according to a new grim report by Global Witness. The organization documented 116 killings in 2014 across 17 countries with the highest number in Brazil, which saw 29 environmental and land defenders killed. Still, the report is a major understatement of the problem as data across much of Africa, China, the Middle East, and Central Asia remains scarce to non-existent.

“Across the world environmental defenders are being shot dead in broad daylight, kidnapped, threatened, or tried as terrorists for standing in the way of so-called ‘development’,” said Billy Kyte, a campaigner with Global Witness. “The true authors of these crimes—a powerful nexus of corporate and state interests—are escaping unpunished. Urgent action is needed to protect citizens and bring perpetrators to justice.”

Most of the deaths last year—116 of them—were related to disputes over land. But mining was linked to 25 deaths, and hydroelectric dams and agribusiness to 14 each. Indigenous people also remain among the most targeted. 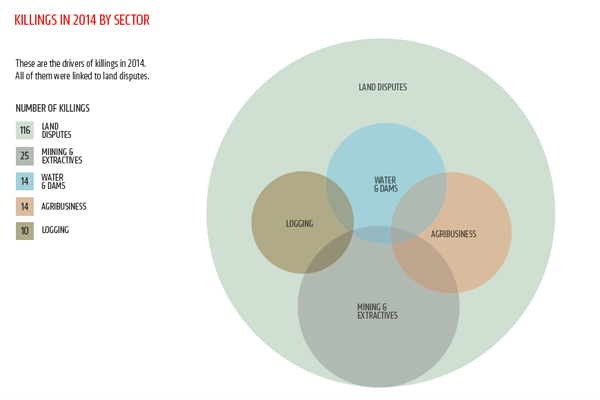 “Environmental defenders are being branded as ‘anti-development’ because the defense of their natural resources often clashes with the notions of development pushed by governments in league with powerful business,” explained Kyte, as the last five years has seen a significant uptick in the number of murdered activists.

Kyte added that “[activists] are stigmatized and criminalized in order to silence their opposition.”

“People defending their rights to land and the environment in Honduras are subject to systematic targeting and face severe risks to their lives,” said Kyte, adding that “conflict over land, extractives and dam projects are the main drivers of violence against activists. Many attacks occur against indigenous leaders defending their land and natural resources, often in the context of the development of mega-projects without prior and informed consent.”

The report also notes that Honduras already has one of the world’s highest murder rates and one of the highest poverty rates in the Western Hemisphere. 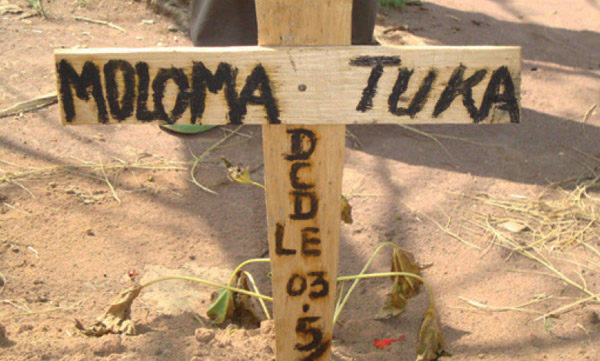 The elderly Frédéric Moloma Tuka was beaten to death during protests over logging operations in the Democratic Republic of Congo. Photo by: © Greenpeace DRC.

“The police are ineffective and responsible for serious human rights abuses, including unlawful killings, whilst the judiciary is compromised by political interference,” according to the report. “In environmental terms, Honduras is plagued by illegal logging and has one of the highest deforestation rates in the world.”

In order to begin tackling the global problem, Kyte said the first thing was for governments “to recognize it as a problem.”

“A UN Human Rights Council resolution addressing the heightened risk posed to environmental and land defenders would be a start,” he added. “But, in the end, governments themselves have to take responsibility and ensure impartial, exhaustive investigations into killings of these activists. And they have to bring perpetrators to account. Many targeted assassinations of activists are being passed off as ‘common’ murders and are going unnoticed.”

Arrests and convictions related to environmental and land homicides continue to be rare.

Many of the murders of environmental activists may be going unnoticed entirely. For example, Global Witness was only able to report on murders in two African countries—Uganda and South Africa—despite the fact that there were likely more activist killings on the continent last year. Central Asia, the Middle East, and China are three additional areas where data is lacking.

“There are also relatively few known cases of killings from African and South Asian countries even though reports indicate the climate for human rights defenders is dangerous in these regions,” said Kyte. “This may be due to a limited presence of civil society organizations and other local groups monitoring the situation of environmental and land activists.” 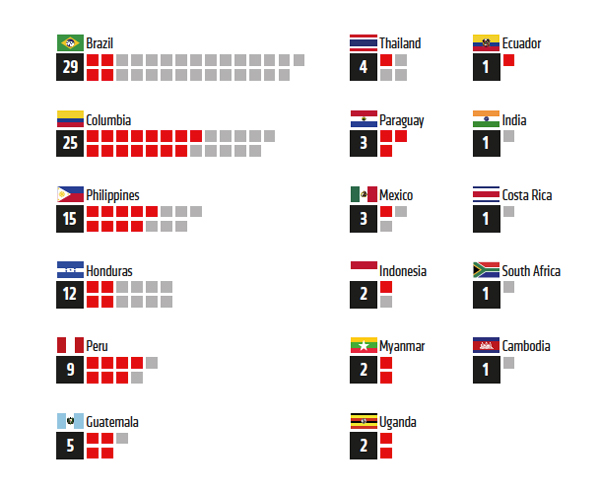 Environmental activist killings by country. Those in red were indigenous people. Image courtesy of Global Witness.