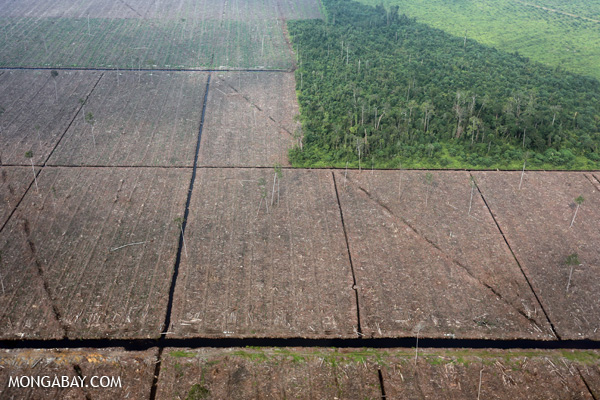 At the edge of a jungle in the Sumatran village of Sumber Jaya, they pock a smoldering ruin, pluming smoke from underground at the end of a dirt road lined with oil palm.

Neri, a local, said the fire had been burning for a month.

The villagers hadn’t started it, he added – it had broken out spontaneously.

Less than a month before the expiry of a freeze on new licenses for land-based exploitation in primary forests and on peat, environmentalists are calling for the moratorium to be not only extended but strengthened too, hampered as they say it has been by chaotic implementation, weak enforcement, standards that don’t go far enough and, some suggest, a lack of political will to see it through.

Sumber Jaya is but one example of the moratorium’s shortcomings. In nearby Tumang village, oil palm seedlings sprout across 40 hectares of peatland that burned in January, an indication of illegal clearing, according to Greenpeace, which organized a trip for journalists to Indonesia’s Riau province last week.

“Large equipment was used here,” said Ali Afriandy, a Riau-based researcher with the NGO. That suggested the plantation was backed by a “medium-sized businessman,” probably from outside the area, he added.

At a third site, in Tanjung Kuras village, the moratorium unnecessarily covered a residential area whose peat forests had been cleared a long time ago, Greenpeace campaigner Teguh Surya said.

“The government should be more careful with the moratorium,” he said. 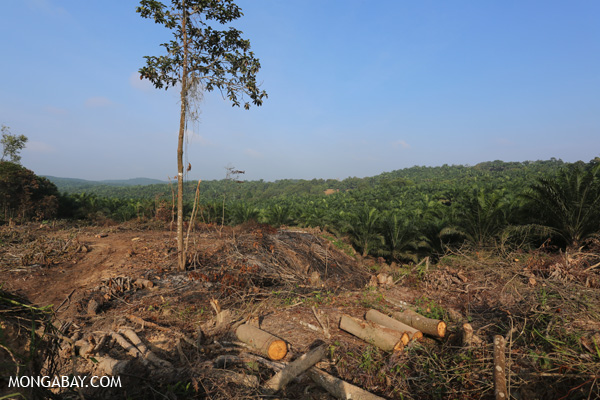 Introduced in 2011 by then-President Susilo Bambang Yudhoyono under an agreement with Norway, the moratorium was extended in May 2013 for another two years. Last month, Environment and Forestry Minister Siti Nurbaya reiterated her promise to renew it a second time before next month’s deadline.

Greenpeace wants President Joko “Jokowi” Widodo to do away with those exceptions and bring all forest and peatland under the moratorium’s protection.

Another problem is that the moratorium rests on a presidential instruction rather than a presidential decree, and the former is not necessarily legally binding, a fact that hinders enforcement, according to Teguh.

“Our big question is, will Jokowi save the forest, or sell more (of it)?” he asked.

Despite a flurry of pledges from major palm oil companies to eliminate deforestation from their supply chains, the industry’s position on the moratorium remains mostly unclear.

Joko Supriono, secretary-general of the Indonesian Palm Oil Association (Gapki), did not respond to an interview request, although Gapki has traditionally opposed the moratorium.

Neither did Shinta Kamdani, vice chairwoman of the Indonesian Chamber of Commerce and Industry (Kadin), reply to questions sent via email.

Informed of Greenpeace’s demands and asked if they believed the moratorium should be strengthened, representatives of Wilmar, Cargill and Musim Mas did not respond.

A GAR spokesman did reply, and while the person said the moratorium was “important” for protecting forest and peatland areas and reducing greenhouse gas emissions, he or she took no stance on whether the moratorium should be strengthened.

“GAR is committed in ensuring that it has a no deforestation footprint in its entire supply chain,” the person wrote in an email.

“Publicly, they say they support (expanded conservation measures), with the IPOP and so on. But behind the scenes, we have no idea,” he said. 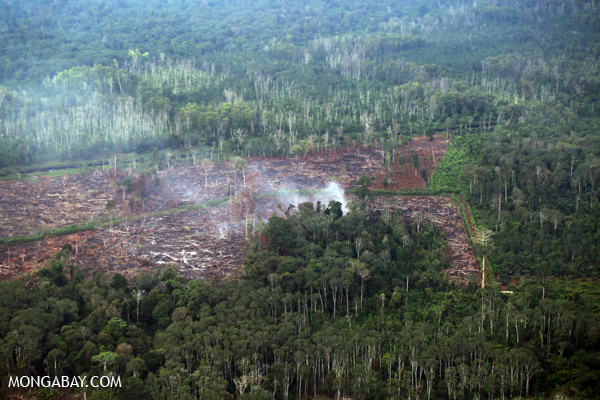 A peat fire burns in Riau. Photo: Rhett A. Butler