by Mrinalini Erkenswick Watsa on 24 April 2015

Shipments of hammerhead shark fins were approved by the Costa Rican government in violation of an international treaty, conservation groups allege. 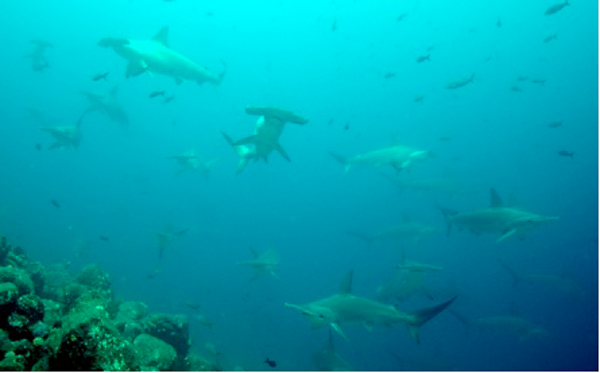 A school of hammerhead sharks swim near the Galapagos Islands. Costa Rica has been exporting two species of hammerheads whose trade is limited under Appendix II of CITES. Photo: Alex Hearn.

On December 24, an American Airlines plane carried 411 kilos (904 pounds) of dried hammerhead shark fins from Alajuela, Costa Rica, to Hong Kong, touching down partway through the journey in Miami. The shipment, valued at nearly $53,000, contained fins from around 411 animals, more than seven times the number on its export permit from the Costa Rican government. The fins came from two species of shark: smooth hammerheads (Sphyrna zygaena), which are classified as Vulnerable by the IUCN, and scalloped hammerheads (Sphyrna lewini), which are classified as Endangered by the IUCN and under the U.S. Endangered Species Act.

The shipment was one of several shark-fin exports from Costa Rica that touched on U.S. soil in violation of American law last fall and winter, and it was one of at least two shipments approved by the Costa Rican government in violation of an international treaty, conservation groups allege. Public outcry over the shipments prompted American Airlines to announce this month that it had ceased shipping shark fins, becoming the first U.S. company to enact such a blanket ban, according to the groups. The publicity also prompted the Costa Rican government to cease permitting hammerhead fin exports for the time being.

Shark fins are used to make an expensive soup that is a cultural signifier of prosperity and good fortune in some East Asian communities. The global harvest of sharks for their fins has come under increasing pressure from conservation groups and governments concerned about threats to declining shark populations. The practice of shark finning, in which the fins are sliced off living sharks that are tossed, mortally wounded, back into the sea, has drawn particular condemnation.

Trade in smooth and scalloped hammerhead sharks is regulated under Appendix II of the Convention on International Trade in Endangered Species of Wild Fauna and Flora (CITES). Costa Rica is one of 181 countries party to CITES, and it strongly supported including three hammerhead species in Appendix II at a March 2013 meeting in Thailand.

At the meeting, a deadline of September 14, 2014 was set for each country to complete a Non-Detriment Finding (NDF) report before it permits the export of Appendix II sharks. The NDF is a scientific assessment, following CITES-issued guidelines, of how export would affect the species. A country abiding by its CITES commitments can only grant an export permit when its NDF determines that the export will not be detrimental to the survival of the species.

Costa Rica has exported fins from hammerheads and other shark species for years, and has laws in place that prohibit the practice of shark finning. Yet the September 14 deadline passed without the country producing an NDF for hammerheads, something it still has not done.

Then, later in November, PRETOMA staff and an inspector with the National Service of Animal Health (SENASA), uncovered fins from hammerheads and oceanic whitetip sharks (Carcharhinus longimanus) in three of thirty 40-kilo sacks awaiting export, Arauz said. Oceanic whitetips also joined Appendix II of CITES in 2013, and they are banned from all commerce by the Inter-American Tropical Tuna Commission (IATTC), of which Costa Rica is a member. The shipments were to be exported to Hong Kong via Miami using the express freight services of UPS and China Airlines.

After the bust, both UPS and the owner of the shark fin cargo — a Costa Rican company called Inversiones Cruz S.A. — collaborated fully with SENASA officers, according to PRETOMA’s website. The entire cargo was returned to Inversiones Cruz, without export. The company even donated fins to PRETOMA for use in training public officers to identify shark fins.

Soon after, on December 18, Costa Rica’s CITES scientific committee (CRACCITES) granted permission for the export of fins from 59 smooth and scalloped hammerhead sharks by accepting a provisional NDF produced by the country’s fisheries department that did not include any scientific assessment. PRETOMA denounced the approval on its website as "irregular," in part because CITES does not allow provisional NDFs.

Despite protests by PRETOMA and others, and in violation of this dubious export permit, Inversiones Cruz S.A. completed the Christmas Eve export of 411 kilos (904 pounds) of hammerhead shark fins to Yue Hing Shark’s Fin and Marine Products Co. Ltd. of Hong Kong — the one carried by American Airlines that touched down in Miami.

An investigation by Costa Rican news outlet the Tico Times examined the inspection logs (called FIADs) for the ships that brought in the fins in question. It found that although the total weight of the fins adds up to the 411 kilos exported on December 24, it does not account for the nearly 60 percent shrinkage that occurs between when fins are landed and subsequently dried. So there should actually have been FIADS for about 1,000 kilos (1.1 tons) of fresh shark fins to support the export permit numbers. Moreover, the investigation found that four of the boats left port after the September 14 deadline, when hammerhead sharks officially joined CITES Appendix II and an NDF was required for exports.

Soon after, another Costa Rican company requested permission to export 1,200 kilos (1.3 tons) of hammerhead shark fins to Hong Kong, according to the Tico Times story. This time, given the public interest in the case, CRACCITES denied permission. However, in February the Costa Rican Ministry of Environment, Energy, and Telecommunications stepped in and granted permission, although only 490 kilos (1,080 pounds) were actually exported under the permit, Arauz told mongabay.com.

At first, in its response to the petition, the ministry allowed an extension of the export permit for 6 months until a finalized NDF is expected to be ready. However, Arauz confirmed that the ministry later reversed course and now says it will not permit any exports until the final NDF is complete.

PRETOMA claims that there is no way to trace the provenance of the exported shark fins to prove they were not obtained by finning live sharks, which is prohibited under Costa Rican law. For its part, the Costa Rican government announced on its website that the fins it issued export permits for in December and February were obtained from sharks captured as bycatch, rather than intentionally, that were brought to port with their fins attached as required by Costa Rican law. It also asserted that it issued all export permits "respecting and consistent with international agreements," including CITES, and that the final permit in February ultimately only authorized the export of 239 kilos (527 pounds) of hammerhead fins.

This second export resolution was only granted to prevent already-harvested fins from being destroyed, Julio Jurado, executive director of the National System of Conservation Areas (SINAC), which oversees CITES implementation, told the Tico Times. “All [the second export resolution] did was allow [exporters] to clear out their warehouses. We won’t be issuing any more export permits until the NDF process is completed,” Jurado said.

Arauz is pessimistic that move will make much difference. He predicted that hammerhead sharks will continue to be killed, but that their fins will be dried and stored in hopes that an NDF will be completed and that exports will resume in the fall.

“So, it’s six more months of killing hammerheads to export their fins in open violation of CITES,” Arauz said. “In the case that the NDF says no more hammerhead shark fins can be exported, the authorities will export them anyway, because of ‘public interest,’ or ‘they are already dead,’ or ‘it’s incidental catch,’ arguments used to separate the country from CITES criteria.”

Illegal entry into the U.S.

When the December 24 shipment of fins from Costa Rica on American Airlines touched down in the United States on its way to Hong Kong, it violated U.S. law. Scalloped hammerhead sharks are listed on the Endangered Species Act, which specifically bans transshipments such as these without a permit.

“All scalloped hammerhead fins exported from Costa Rica derive from the endangered Eastern Pacific population that is protected under the ESA. The fact that the U.S. failed to interrupt the shipments the moment they touched down on U.S. soil, makes them an accomplice in the unregulated, international trade of shark fins,” said Maike Heidemeyer, a biologist with PRETOMA who investigated the shipments, in a press release.

Officials with the U.S. Fish and Wildlife Service (USFWS), which is tasked with preventing illegal wildlife shipments into the country, said they could not provide specific details on that or any other Costa Rican shark fin shipment, citing privacy law.

All imports of endangered species, including transshipments, must be declared to the USFWS for inspection, Gavin Shire, USFWS’s chief of public affairs, told mongabay.com. However, transshipment declarations are rarely, if ever, made. "As far as we can tell, our Division of Management Authority has never actually dealt with such a shipment," Shire said.

Random or proactive inspections do unearth wildlife trafficking, but with only 119 inspectors nationwide, it is a very small percentage of what actually crosses U.S. borders, Tamesha Woulard, a senior inspector with the USFWS, told mongabay.com. Shire said that exporters, not airlines or other carriers, are responsible for ensuring that any permits or paperwork are in order.

Arauz told mongabay.com that all flights carrying shark fins from Costa Rica to Hong Kong stop over in the U.S. Yet officials with the USFWS, the National Oceanic and Atmospheric Association, and the U.S. embassy in Costa Rica declined to pursue the case when PRETOMA brought it to their attention, Arauz said.

On April 6, the Costa Rican Times re-published an account of the shark-fin shipments, including evidence of American Airlines’ role, stirring up a storm of comments across social media.

The next day, American Airlines tweeted "All shipments were made legally. We’ve stopped shipping shark fins on March 30th." (Separate tweets indicated the company stopped on March 4.) The company has not issued a formal press release describing the policy, and it did not respond to a request for further information from mongabay.com

“To see American Airlines, a major U.S. airline with extensive influence, publicly acknowledge that they are no longer going to be shipping shark fins is incredible,” Joanna Nasar, communication manager for Turtle Island Restoration Network, a California-based conservation group that partners with PRETOMA, said in a press release. “It is what we have been working towards for months, and I applaud them for doing the right thing.”