Featured video: ‘A river in dispute’ documentary explores how a planned dam in the Amazon is affecting traditional communities

Dams or indigenous land: the battle over the Munduruku frontier

Nobody listened to them: fishing communities to be displaced by dams want a say in their future

Here comes progress: what will planned megaprojects mean for an Amazon city?

Under the threat of losing their lands to a hydroelectric power plant project strategic to the Brazilian government, communities along the Tapajós River, one of the most pristine in Brazil, prepare to defend what is theirs.

“For the government to take me out of here, to take me to another place, it can believe it is possible but I will not leave. Only if the government kills me,” said Juarez Saw Munduruku, chief of the Sawré Muybu indigenous territory. If the dam is built, the land will be flooded and will seriously compromise his people’s existence.

Life in traditional ribeirinho communities along the river would also change drastically. “A house in the city doesn’t feed the stomach,” said Teresa Lobo Pereira, a resident of one ribeirinho community, referring to companies’ and the government’s promises of progress. “What feeds us is this rich river, loaded with fish, where we eat as much as we want.”

If the ribeirinhos are forced to leave, Itaituba, the nearest city, with poor infrastructure and a lack of adequate social planning, gives a hint of what progress would look like. “We hope the hydroelectric project comes to add to the city, and to Brazil. Not to take away, not to generate social problems — even though we know they are going to be generated, even if we set up the project the best way we can,” said Hilário Rocha, secretary of the environment for the municipality of Itaituba.

The documentary was produced by Agência Pública, a Brazilian organization that promotes and produces high quality, non-partisan investigative journalism in order to strengthen Brazilian democracy. Pública is an award-winning women-led organization, something unique in the context of Brazilian journalism. The Portuguese word pública is a feminine adjective. It means everything that belongs to the public. 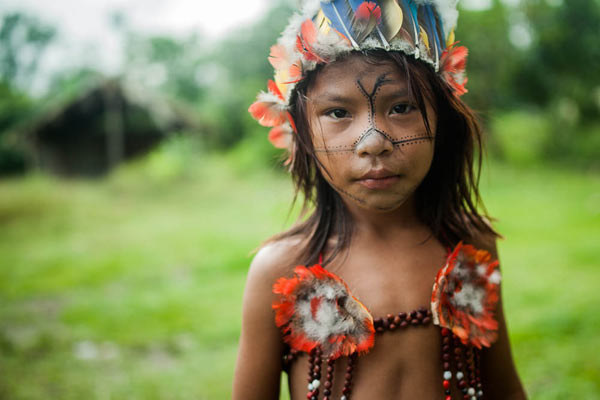 A child prepares to participate in the singing and dancing rituals of the Munduruku tribe in the Tapajós region of Brazil. Photo: Marcio Isensee e Sá