Court rules deforestation of Peruvian rainforest for chocolate was legal

United Cacao didn’t need authorization to clear its plantation near Tamshiyacu, said a court in Loreto, Peru, resolving for the time being one of a series of questions about the legality and environmental sustainability of companies connected with plantations entrepreneur Dennis Melka. 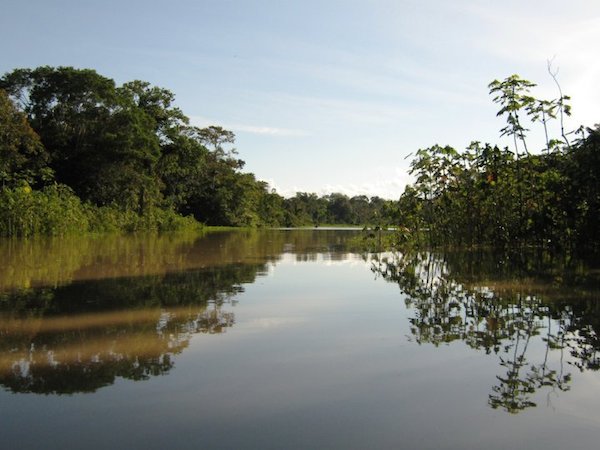 Forest along an Amazon tributary near where the controversial Cacao del Peru Norte cocoa plantation is being developed. Photo by Morgan Erickson-Davis.

A regional court in Loreto, Peru recently ruled that the clearing of more than 2,000 hectares of forest by Cacao del Peru Norte for a plantation to grow cacao, the raw material behind chocolate, was legal, reported the investigative news site OjoPúblico on April 9. The ruling rejects contentions brought by Forestry Department that the company should have sought approval to clear the trees.

OjoPúblico also reported that the prosecutor for the Ministry of the Environment plans to appeal the decision in a higher court in Lima.

Cacao del Peru Norte is owned by United Cacao, a Cayman Islands-based company that is publicly traded on the London Stock Exchange. Since 2013, when work began on the cacao plantation near the town of Tamshiyacu, United Cacao CEO Dennis Melka and other representatives of the companies have been embroiled in battles over whether they developed the plantation lawfully and according to – as claimed on the United Cacao website – “our sustainable and ethical planting strategy.”

The legal questions in Peru are murky because a number of different – and at times contradictory – processes govern the protection for forests and the use of land for agriculture. Julia Urrunaga, director of Peru programs for the Environmental Investigation Agency, an NGO, and her colleagues highlighted these ambiguities in a comprehensive report released on April 7 called “Deforestation by Definition,” which examines land acquisition and clearing practices for agriculture in Peru. The report also links Melka to 25 agriculture companies based in Peru, and the authors assert that those companies have deforested around 7,000 hectares of forest, including land for the cacao plantation in Loreto, as well as for oil palm plantations in the region of Ucayali. 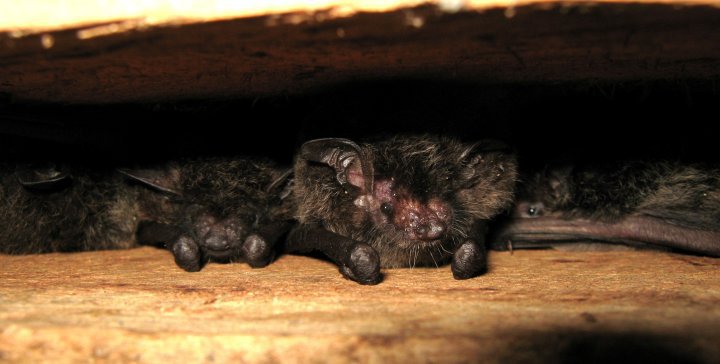 The forests of northern Peru support high biodiversity, providing habitat for many species from large mammals like jaguars and tapirs to small ones like these bats (species unknown). Photo by Morgan Erickson-Davis.

As the authors point out, land can legally be classified for agricultural use based on “soil and climatic characteristics” regardless of whether the land supports forests. But laws also protect forests, saying they can’t be used for agriculture.

These inconsistencies in forest governance in Peru have been exploited by plantation businesses such as those run by Melka, said José Alvarez, director general of biodiversity with the Ministry of the Environment.

The company was able to cut those trees “because of a small hole in our laws,” he told mongabay.com in an interview. Peru’s new forestry law won’t let this happen in the future, he added, explaining that the deforestation of standing forest near Tamshiyacu that occurred would have to have first been approved by the Ministry of the Environment. Stakeholders have had the opportunity to comment on the forestry law to flesh out the law’s “reglamentos” that detail how the law will work in practice, such as who will be responsible for enforcement.

Questions have also arisen about Cacao del Peru Norte’s compliance with other legal requirements. In December 2014, the Ministry of Agriculture issued a resolution, ordering the company to stop all work on the plantation and giving it 90 working days – until early May – to produce a soil study that confirmed the site’s ability to handle the intensification of agriculture that a cacao plantation would entail.

But there is no evidence that work stopped on the plantation or that the company submitted the study. Mongabay.com repeatedly attempted to verify this with both the Ministry of Agriculture and United Cacao’s directors, but did not receive responses from either.

Sidney Novoa and his colleagues at ACCA – the Asociación para la Conservación de la Cuenca Amazónica – as well as the group’s U.S.-based sister organization, the Amazon Conservation Association (ACA), demonstrated that workers have continued to clear vegetation and create corridors through the remaining intact forest on the Cacao del Peru Norte site over this time period. The creation of these corridors is often followed by deforestation, said Matt Finer, an ecologist with ACA.

Novoa sent a technical report to the Ministry of Agriculture in early April with satellite time-series data showing that the company had not stopped work, per the resolution, between December 21, 2014, and March 3, 2015.

Novoa and Finer, along with Clinton Jenkins of the Institute for Ecological Research in Brazil, used satellite analyses to show that the initial 2,100 hectares cleared by the company had been nearly entirely covered (98 percent) with closed-canopy rainforest. Separate data from Global Forest Watch shows deforestation in the shape of the Cacao del Peru Norte plantation and that the forest in this area had a canopy density of more than 75 percent, the highest level of forest coverage available with that dataset. 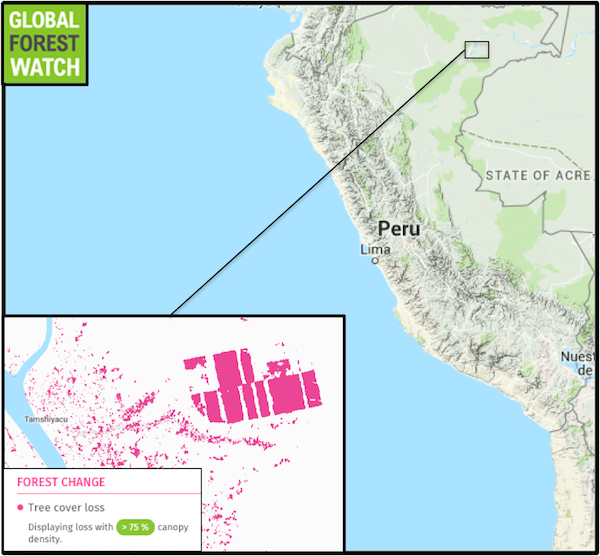 Forest change data from Global Forest Watch shows the tree cover loss on the Cacao del Peru Norte plantation that occurred from 2001 through 2013, which corresponds to shapes of the company’s own maps of the plantation. As satellite data from the Amazon Conservation Association confirms, the plantation formerly supported dense, closed canopy rainforest. Click to enlarge. 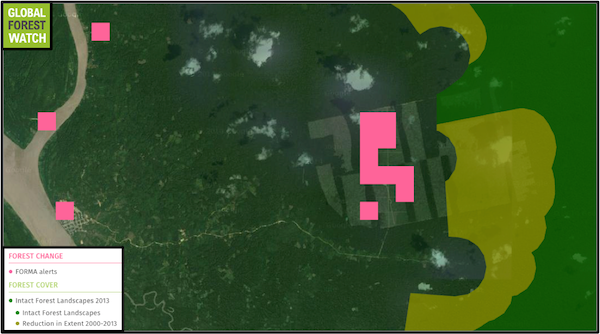 FORMA alerts are 500-by-500-meter areas of probable deforestation. Global Forest Watch shows several FORMA alerts occurred in the region of the UC plantation between December, 2014 and March, 2015. The area also shows significant degradation of intact forest landscapes (IFLs) since 2000, with IFLs being regions of forest large enough and far enough away from human activity to retain their original biodiversity levels. Click to enlarge. 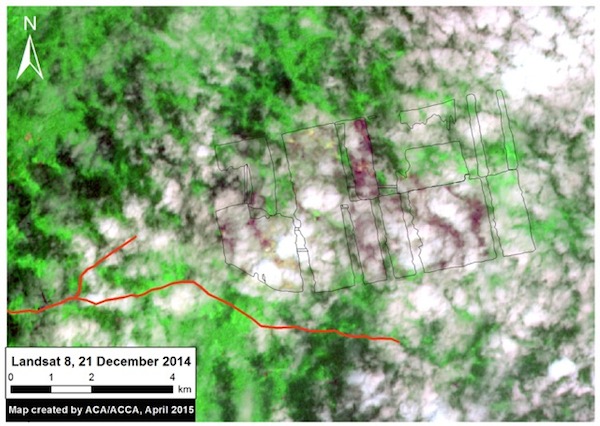 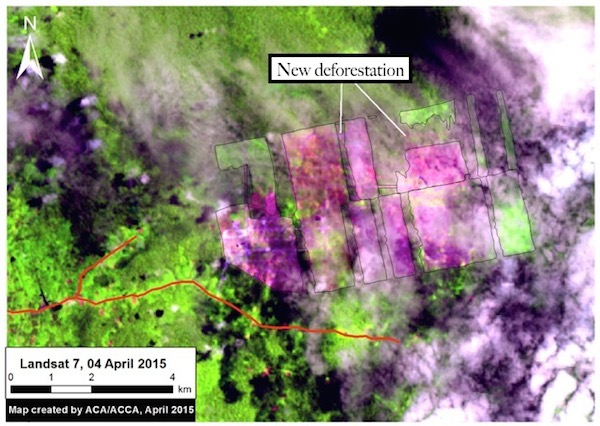 About a week prior to the EIA report release, Melka condemned NGO concerns about deforestation as a result of plantation agriculture as “neocolonialist” during an interview with the investment website DirectorsTalk. Melka argued that “bandied” accusations of rainforest destruction were not respectful of the national sovereignty of Peru and its right to determine what to do with its own land.

But the revelations by ACCA and ACA have been based on data, not emotion, said Daniela Pogliani, ACCA’s executive director based in Lima. “We wanted to be able to apply our expertise in science to be able to provide sound, scientific, factual information” that decision-makers can then use to make informed decisions, she said. “In principle, we’re not against oil palm or cacao plantations. But yes, we’re against them when they’re on primary forest.”

Pogliani said that these types of developments should occur on degraded land. But Melka’s contention in the DirectorsTalk interview was that agricultural plantations often do make use of degraded land. He did not specifically address the Tamshiyacu plantation, in response to a question from the host of the program about how United Cacao approached the “bullet to be dodged” of deforestation for plantation agriculture.

“I think it’s important to note that by the time the plantation companies get to the land, that land has been logged or clear cut of all tropical hardwoods,” Melka said. “It’s not rainforest. It’s secondary forest. It’s a highly degraded area.”

With regard to the Tamshiyacu plantation, it would be a misrepresentation to characterize that land as having been only valuable for agriculture, said Bill Laurance, a tropical ecologist based at James Cook University in Cairns, Australia.

“The notion that this is just degraded, valueless land is simply a laughable proposition,” he said. He contends that a lot of tropical forest is still very important from a conservation perspective, despite logging being a “dominant” use of land in the tropics. “Much of the tropical world has been selectively logged.” 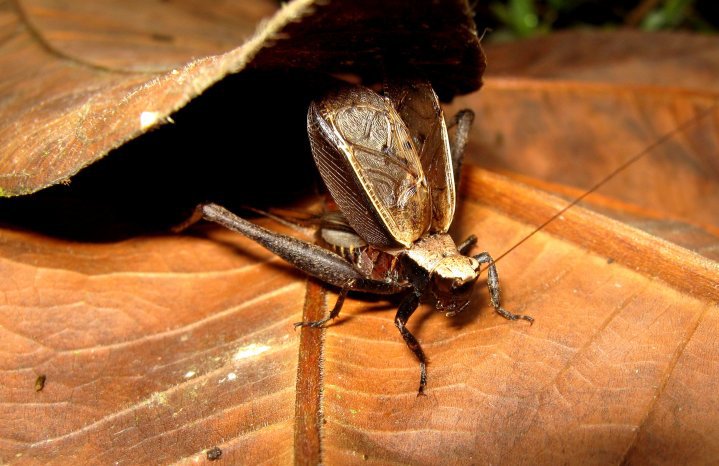 A cricket emerges from leaf litter near Iquitos, Peru. Photo by Morgan Erickson-Davis.

Laurance pointed to a study that he and his colleagues published in the journal Nature in 2011. They found that even forests that have been logged of certain valuable hardwood species, as large parts of the Amazon have, have biodiversity, carbon storage, and water features much closer to what you would find in a primary forest than what you would see on plantations that support a single crop, such as oil palm.

“Biologically, those areas tend to be deserts compared to selectively logged or primary forest,” he added.

But Laurance, who was not involved in the analysis of the satellite data, said that in the case of the United Cacao plantation near Tamshiycu, there is little doubt that dense forest was present on this land before the company moved in.

And the assertion that it was largely mature rainforest was bolstered by the addition of airborne, laser-based LiDAR data, analyzed by Greg Asner, an ecologist at the Carnegie Institution for Science at Stanford University, to quantify the amounts of carbon present in the forests before they were cut. Asner told mongabay.com in January that his team’s analysis revealed that these forests held some of the highest amounts of carbon in Peru.

Read more about this developing story: