Could inland aquaculture help save the oceans and feed the world? 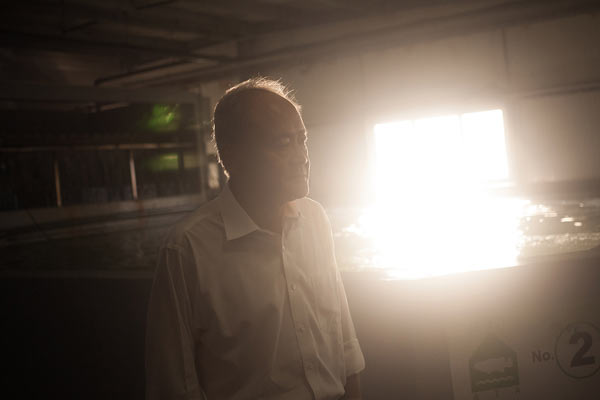 Mark Kwok, owner of Aquaculture Technology Asia, at his facility in Hong Kong. Kwok’s grouper farm uses special skimmers, bacteria, and UV technology that recycles fouled water and returns it back into the tanks making it likely the most sustainable grouper farm in the world. Photo credit: Dominic Bracco II

Mark Kwok has always loved the ocean. An avid diver and spear fisherman, he has travelled the planet in search of exotic fish and undersea adventure. Born into a wealthy Hong Kong family, he had the freedom to explore the world’s oceans.

But in the last decade or so, he hasn’t been content just looking at fish. He’s been growing them. In a squat, unassuming cluster of buildings in an industrial suburb north of Hong Kong, Kwok is experimenting with a potentially revolutionary technology. The facility doesn’t look like much from the outside, but inside it may house the future of aquaculture and one solution to the world’s ocean crisis.

“The next generation needs to begin waking up to the fact that the sea is in trouble and that fish stocks are running out,” Kwok says from inside the humble offices of his fish farm.

A refined man who speaks immaculate English, Kwok says he grew up in Hong Kong during a time when the waters there were as clear as a calm day in Bermuda. He got into diving in the 1970s and fell in love with the wonders of the ocean. His passion eventually led him into the seafood industry and in the 1990s he ran a lucrative business sending ships across the region to transport fish that were bound for hungry Hong Kong restaurant-goers.

His boats went to Indonesia, Malaysia, and as far as the Marshall Islands in search of popular fish like grouper and wrasse. But he lost his taste for the seafood business after two ships, along with their crews, went down in a single year’s fickle storms. He left the business out of guilt for the families of his crews and with a growing sense that wild fish were disappearing.

He wanted to remain involved with the seafood industry, but also wanted to feel like he was making a contribution to the future of the oceans he so loved. Not a man to sit back and simply donate to charity, he decided to invest in experimental aquaculture. Kwok partnered with a research group at the University of Hong Kong, growing grouper in tanks, and in 2003 opened a small company called Aquaculture Technologies Asia Ltd. 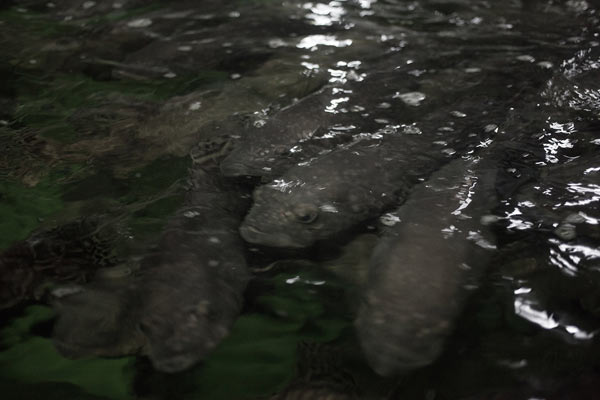 The idea was simple. Giant grouper, a slow-growing fish popular in high-end Asian restaurants, is disappearing from the Earth, due to overfishing.

“Grouper to the Asians is like salmon to the Westerners,” Kwok says. “[But] you don’t see them very often in the wild. In my 30 years of scuba diving in this part of the world, I’ve only seen it maybe five or six times.”

Today most groupers are harvested from fish farms that pollute coastal areas with fish waste, fertilizers and pesticides. But what if these fish raising operations could be brought completely onto land, and all the water stayed within the system?

So that’s what the company did. Today, Aquaculture Technologies Asia may run the world’s only self-contained, land-based grouper farm. When the water in the tanks becomes fouled, Kwok runs it through special skimmers that remove organic material, then exposes it to UV light and ozone to kill bacteria, and finally pumps the purified water back into the tanks. The result is less disease, less need for pesticides and zero pollution.

The first thing you notice when you look into one of Kwok’s numerous large tanks is that the water isn’t calm. A pump keeps it swirling in a uniform direction, almost like a whirlpool. Kwok says this not only keeps the water cleaner, it exercises the fish. And indeed, unlike many grouper you see in Hong Kong shops, bloated from a lazy pond life, these fish are as sleek and strong as wild giant grouper.

Developing inland aquaculture hasn’t been easy, however. In addition to being a highly complicated process, it’s also very pricey. To prevent fish disease, Kwok has separate filtering and pumping systems for each tank, something few operations would ever consider. And despite the fact that these might be the world’s most sustainably harvested giant grouper, he’s having trouble convincing restaurants to pay anything more than market price — meaning he must compete with cheaper and less eco-friendly operations.

“We are the only ones crazy enough to do this, it’s very expensive,” he says. “What we are doing may be a little bit ahead of our own time.” 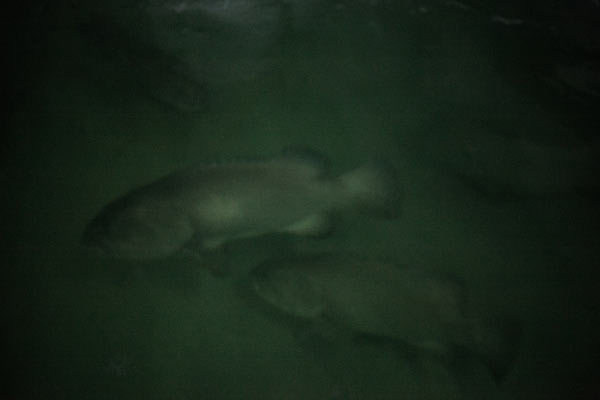 Giant grouper in their tanks at the facility. Aquaculture Technology Asia, may be the world’s only self contained grouper farm. Photo credit: Dominic Bracco II

That’s not to say his efforts haven’t paid off. He’s been listed by the World Wildlife Foundation as a sustainable source of grouper, which has helped him sell to a lot of upscale hotels with clients interested in environmental stewardship.

Kwok has deep pockets and can afford to experiment, but he also believes there is a strong business model for the operation. As Chinese concerns mount over food safety, he hopes to be able to charge a 15 to 20 percent premium for his fish, just as Western restaurants do for sustainable fare.

“For people like you, you don’t mind if [your fish] is frozen or chilled,” says Angus Lam, a manager at the facility, referring to Westerners. “For Chinese people, they pay a premium for live fish. For an assurance of freshness.”

Kwok has another advantage over other producers. The gentler growing conditions in his tanks allow him to buy smaller, cheaper fingerlings, or baby fish than do standard operations. Most importantly, his fish don’t suffer the high mortality of other fish farms. A typical coastal operation might lose 70 or 80 percent of its stock in a bad year. But Aquaculture Technologies Asia is aiming to get this number down to just 10 percent.

Taken together, factors like these could help the operation turn a profit. Kwok says the facility currently produces anywhere from 60 to 100 tons per year of grouper –15,000 fish or so, some as heavy as 100 pounds — which sell for around $30 per pound. Impressive as this is, it’ll be some time before these innovative growing practices spread to other grouper farms, let alone to facilities growing less pricey fish species.

One ecological problem yet to solve: the new process still requires large amounts of unsustainable fish feed to raise the grouper. But Kwok responds optimistically, declaring that we have to continue seeking new solutions while there is time.

“Nature has a funny way of doing things. You give him enough elbow room, it’ll come around. But if you keep applying pressure, it will break and then everyone is up the creek,” he concludes. “That’s nature. Give it breathing space and it will come back.”