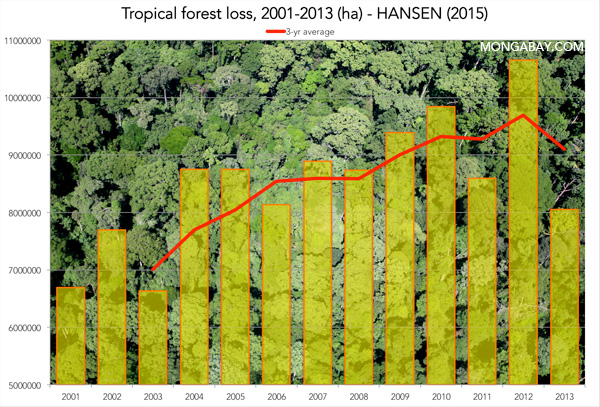 Synthesizing a large body of reports and academic research, The Prince of Wales’s International Sustainability Unit’s Tropical Forests: A Review lays out the current state of tropical forests, their importance, the threats they face, and what will be needed to save and restore them.

The report emphasizes the role tropical forests play in addressing pressing environmental problems, especially climate change. It makes the case that tropical forests could provide up to a third of greenhouse gas reductions if deforestation and forest degradation were cut to zero and damaged and degraded forests were allowed to recover.

“The benefits of considering the mitigation and sequestration potential of tropical forests in the round seem clear: 24-33% is a highly significant component of the overall carbon mitigation goal, underscoring the critical importance of tropical forests within the climate challenge,” the report states. “The inter-connectedness of the factors at play means that continuing deforestation and degradation will produce a double loss (CO2 emissions and a lower level of CO2 absorption), while success in reducing them will result in a win-win outcome (lower CO2 emissions, more sequestration).”

The report also highlights recent research revealing the role tropical forests play in maintaining rainfall both regionally and globally. The issue has recently made headlines in Brazil with some of the country’s largest cities and key agricultural areas suffering from severe drought. A growing body of studies suggest that ongoing deforestation could worsen the problem and even impact precipitation abroad: models indicate that forest cover loss in the Amazon and the Congo Basin could affect rainfall patterns in the United States and Europe. 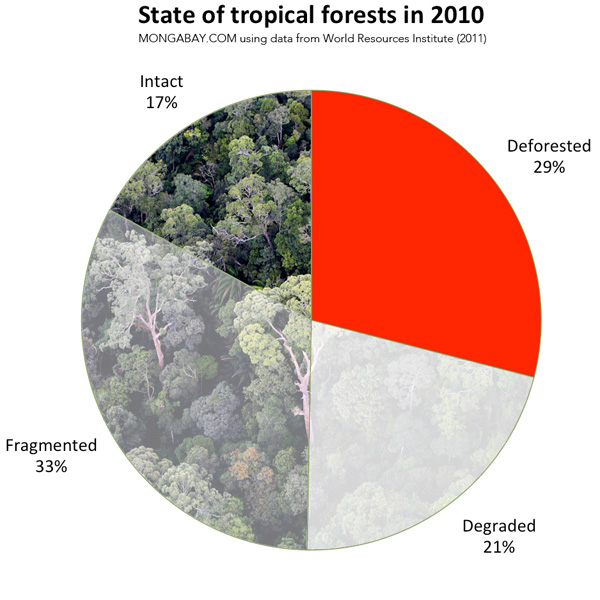 While awareness of the importance of forests in global ecological function is growing, programs to slow deforestation and encourage conservation are still nascent and so far have made limited progress. For example, the report cites the U.N. Reducing Emissions from Deforestation and Degradation (REDD+) which it says remains underfunded relative to its ambitious nature and is therefore failing to make much headway “at the spatial level where action matters most: the landscape.”

Extending on that theme, the report argues for a more holistic approach to combat forest destruction and diminishment. For example, government pledges to support forest conservation are dwarfed by government subsidies for industries and activities that destroy forests. Policies also often overlook forest degradation, which by some estimates may be a bigger source of emissions than outright forest clearing. Therefore anti-deforestation programs may be undermining themselves if they encourage first-time logging of primary forests as part of the solution. Furthermore, subtler forms of degradation like “defaunation” are rarely incorporated into forest policies even though the can have long-term impacts on forest health and resilience.

The report does note “significant progress” in efforts to eliminate deforestation from corporate supply chains, although it says these “need to move more rapidly from the commitment to the implementation phase” and work in concert with broader efforts to value ecosystem services, identify alternative lands for production, and restore forests. The report also returns to the issue of degradation in commodity supply chains, suggesting that the role of selective logging be “re-assessed”.

The report concludes by urging forests be prioritized as a key part of the solution as the world moves forward on negotiating a binding framework on climate change. Failure to do so could doom efforts to stop climate change and curb biodiversity loss, says Prince Charles.

“We need to treat the Earth as if it were a patient,” he wrote in the report’s introduction. “It is one, I fear, that is in an increasingly critical condition and which requires intensive care.”