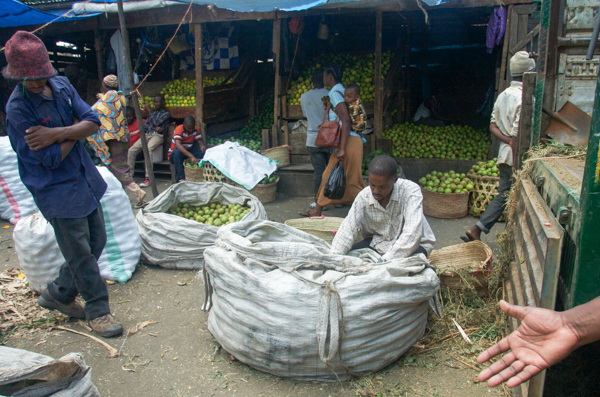 At the bustling Kilombero wholesale produce market in the town of Arusha, Tanzania, traders sort hundreds of pounds of mangos that have just been unloaded from trucks. Though the mangos have come directly from the farms where they were grown, many of them are bruised. The damage is almost all a result of how the fruit was transported: packed as tightly as possible into thin bags and crammed into trucks that offer no padding as they race over Tanzania’s bumpy rural roads.

Traders separate the mangos they’ll have to discard or, if they’re lucky, sell at a discount to buyers who may be able to turn them into juice. A sprawling, three-foot-high mound of rejected mangos grows by the minute. Brown and black spots speckle the fruits’ green skin, orange flesh oozing out through cracks.

Like much of sub-Saharan Africa, Tanzania produces all kinds of food for local consumption as well as export. Yet here, in the part of the world that can arguably least afford to waste food, a good portion of these crops are lost. Much of the loss happens before the food can be eaten, during the so-called "post-harvest" phase between harvest and the point of sale or consumption. The problem is that the equipment and methods that many small-scale farmers use to process and store their crops are inadequate, so months after the harvest, tons of corn might be infested with insects or contaminated with toxic mold. More perishable crops like fruits and vegetables may become inedible in a matter of days. Long a neglected aspect of the agricultural system in developing countries, this waste stream of food is starting to attract attention from global agriculture organizations and financial institutions, offering hope that the losses can be reduced, and with them rates of rural hunger and malnutrition.

Food waste in Africa and other developing nations is an entirely different problem than it is in developed regions. In developing regions, often the biggest chunk of food loss — more than 40 percent — occurs during the post-harvest phase, according to a 2011 U.N. Food and Agriculture Organization (FAO) report. But in developed regions, the biggest chunk — again more than 40 percent — occurs at the retail and consumer levels.

Across sub-Saharan Africa, more than a third of fruits, vegetables, roots, and tubers are lost by the time they are processed or packaged, according to the FAO report, the most recent comprehensive estimate available. More precise estimates vary from year to year and from country to country. In Kenya, pests destroy up to 30 percent of all maize harvested — a total loss of about 162 million tons, according to the government-run Kenya Agricultural Research Institute. Ghana, meanwhile, loses up to 50 percent of its main crops of vegetables, fruits, cereals, roots, and tubers, said Joe Oteng-Adjei, the country’s Minister for Environment, Science, Technology and Innovation, according to the news service GhanaWeb. 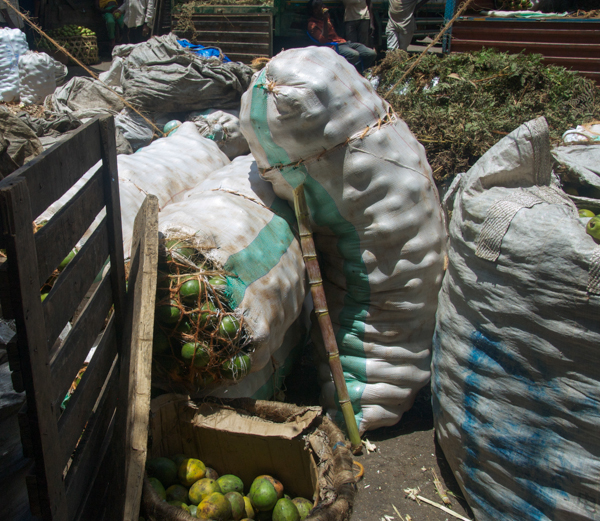 Bags like these are used to transport many types of produce, from mangos to cabbage, across Tanzania’s bumpy roads. They are packed as tightly as possible because transporters charge by the unit, not by weight, and there is little effort to ensure quality or freshness. Credit: Rachel Cernansky.

The food waste problem has been neglected for so long that there’s no long-term data to show whether these figures have changed over time. In fact, the FAO and other organizations have acknowledged that even existing estimates are not particularly reliable, because the measurement methods are haphazard at best. What’s clear is that food in sub-Saharan Africa is being wasted on a large scale, and any progress in reducing that waste should benefit the region — and even the global food supply — significantly. A World Bank report, also issued in 2011, stated that even a 1 percent reduction in post-harvest losses could lead to annual economic gains of $40 million, much of it going directly to farmers.

The waste is an economic loss, but it is also a loss of precious nutrition and calories. The World Bank report estimated that the value of annual losses, $4 billion, exceeds the total value of food aid sent to sub-Saharan Africa in the decade up to 2008. Even as international efforts to reduce hunger in the region have increased, most of the dollars spent have focused on boosting crop yields, despite the lack of means for storing extra crops.

“More production is not going to be able to fill that gap that we’re worried about to feed the world in the future. What we have to do is reduce losses,” said Lisa Kitinoja, founder of the Oregon-based, nonprofit Postharvest Education Foundation.

That is slowly starting to happen. The release of the two 2011 reports by international institutions as influential as the World Bank and FAO served as an indication of the growing interest in solving this problem — and also as a rallying cry that motivated other organizations to get involved.

Agriculture research organizations across Africa, including several members of the respected global research consortium CGIAR, have started focusing on ways to reduce crop losses. The Seattle-based Bill and Melinda Gates Foundation and the New York-based Rockefeller Foundation have funded initiatives to study and reduce food waste in developing countries, as have organizations in Europe and elsewhere.

Just outside Arusha, a women’s group is learning to make and can a variety of jams that they can sell in nearby markets: mango and guava, but also more experimental flavors like banana-ginger and even an onion marmalade. It’s a sharp learning curve for them. To be able to sell commercially, they have to learn about health and sanitation (for a food-safety certification) in addition to perfecting their jam recipes.

On a recent Saturday afternoon, a batch of the banana-ginger jam stewed on a freestanding gas burner in a nondescript church-owned building. The women boiled and sterilized jars as black clouds of bees swarmed the room. Lesson learned: close the windows before making banana jam.

Ultimately, the women hope to preserve more of their crops to eat throughout the year, and earn a bit of income in the process. The training they received from a local post-harvest consultant is just the kind of thing a growing number of organizations working with rural communities to reduce food waste intends to do. The Postharvest Education Foundation, for example, works with farmers and other agricultural workers around the world to identify projects that can help them make a better living by preserving more of their crops.

Because people are accustomed to losing so much of their harvest, they often need some kind of inspiration, or motivation, before they even consider trying to reduce waste. For example, the group making jam had seen that another group of women making jam across town was able to sell to the local upscale supermarket. The potential for such a lucrative market made them eager to try it for themselves.

“Farmers harvest and they don’t store. They want to market and sell and get cash straight away,” said Ngoni Nenguwo, post-harvest specialist at the Arusha office of the World Vegetable Center, or AVRDC, an international agricultural-research nonprofit that trained the jam-making women. “It just never seemed an option to preserve better. Waste is just a part of agriculture.”

Faraji Msechu, who farms a small plot a few hours to the south of Arusha, said he never thought about trying to reduce the amount of corn he lost to poor storage. That changed when an organization reached out to him to participate in research on storage gear that could improve upon the polypropylene bags he and most other farmers stored their corn in. “I never had that thinking. I just used the polypropylene bags to store maize, and it was business as usual,” he said.

As important as the need to transform old habits is the need to improve the storage and processing equipment available in sub-Saharan Africa. There is a quickly-growing array of tools, from forced-air cooling rooms to solar dryers, that can help farmers and processors preserve their harvest in the absence of the grain elevators, refrigerators, and freezers that developed countries rely on so heavily. 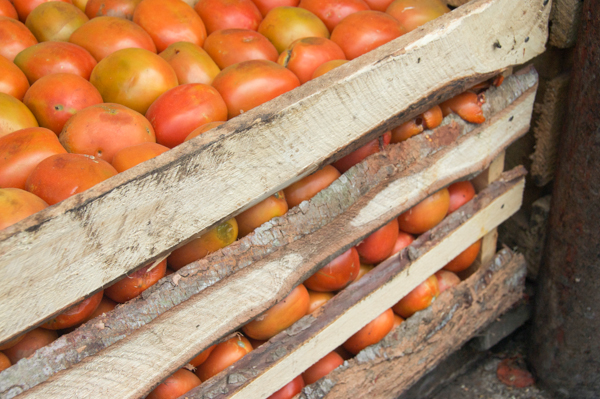 In many parts of Africa, tomatoes are packed tightly into wooden crates like this and then stacked in trucks for their trip from farm to market. Research has shown that more than half of the tomatoes carried in crates like these may be damaged. Credit: Rachel Cernansky.

AVRDC has a department devoted to post-harvest research and operates a training center in Arusha to demonstrate equipment for local farmers. One promising example on offer is plastic crates for transportation. AVRDC research has shown that switching from wood-slat to plastic crates can reduce the percentage of tomatoes lost during transport from 53 to 22. Because the plastic crates are smoother and have more even walls, the tomatoes inside don’t get scratched, squeezed, or smashed as easily as they do in the wooden ones. Even so, the crates are a tough sell. They are much more expensive than the wooden crates, so they must be shipped back to the farmer for reuse, whereas the wooden crates are used once then broken down for, say, firewood at the end of the journey.

Compatible Technology International, a Minnesota-based nonprofit, has designed and tested several products to reduce crop losses in various African countries in recent years. The organization recently introduced equipment for processing millet in Senegal that it says captures more than 90 percent of the grain — up from roughly half using traditional methods — while also nearly eliminating contaminants like dirt and debris. But equipment alone isn’t the solution, said executive director Alexandra Spieldoch. Also essential is leadership and financial training to help farmers adopt the equipment —something the organization tries to achieve through partnerships with local groups and government agencies.

Other researchers in Tanzania, Kenya, and a few other countries are studying the potential of plant materials to serve as pesticides during crop storage. If they prove successful, the plant materials may save farmers money while also eliminating the need for potentially harmful synthetic chemicals.

Efforts like these are all so new that it remains unclear which are likely to be the most effective or easily adopted. What is clear is that in countries like Tanzania, where malnutrition and hunger are as persistent as ever, every ounce of wasted food could have provided beneficial calories for someone.

In February, during a training course in Arusha for agriculture workers learning to teach farmers better crop storage and processing methods, Kitinoja focused part of a morning on emerging opportunities for post-harvest work. There is a lot of potential throughout sub-Saharan Africa right now, not only for reducing the amount of food that gets wasted, but also for people to make careers out of doing so, she said.

“I’ve been working on this for 30 years," she said. "Three years ago, I couldn’t have made this presentation. No one was talking about postharvest.”

This is the first in a series of stories on post-harvest crop losses in sub-Saharan Africa.