Tropical forests support the greatest diversity of species in the world, yet we are rapidly destroying them. Most deforestation in the tropics is due to agricultural development and livestock production, the two greatest causes of declines in terrestrial biodiversity. However, one strategy that has been gaining attention for its potential to preserve biodiversity is shade-grown agriculture. Crops such as cocoa (Theobroma cacao), the source of chocolate, are grown beneath overstory trees, conserving part of the original forest habitat.

Although past research has shown that biodiversity is usually higher in shade-grown agro-ecosystems than in monoculture crops, until recently little has been known about whether shade-grown crops could harbor populations of more sensitive and specialized species. To this end, Zach Peery and Jonathan Pauli, wildlife biologists from the University of Wisconsin-Madison, sought to determine if a shade-grown cocoa plantation in Costa Rica could serve as a viable habitat for sloths.

“The development of shade-grown agriculture systems presents both opportunities and challenges for biodiversity protection,” the researchers write in their study in the Journal of Applied Ecology, where they specifically looked at whether shade-grown plantations could fully support sloth populations without relying on immigration by individuals from surrounding, intact forests.

Sloths spend most of their time in the forest canopy. They are arboreal folivores, or leaf-eaters, with low metabolic rates, meaning they require prolonged periods of inactivity, hence their common name. Their slow and infrequent movements also result in a weakened ability to disperse, which, coupled with their arboreal lifestyle, makes them especially sensitive to habitat loss and fragmentation.

Two different sloth species are found in the shade-grown cocoa plantation in Costa Rica. The Hoffman’s two-toed sloth (Choloepus hoffmanni) is considered more of a generalist species, because it inhabits a greater range of habitat types and has a broader diet than the brown-throated three-toed sloth (Bradypus variegates), a specialist species.

Peery and Pauli’s study area comprised a mix of cocoa trees grown beneath an overstory of native trees, together with tropical forest patches, cattle pastures, monocultures of cultivated crops, and some human development. The researchers captured sloths of both species and equipped each individual with a Passive Integrated Transponder tag, as well as color-coded radio collars for the adults. 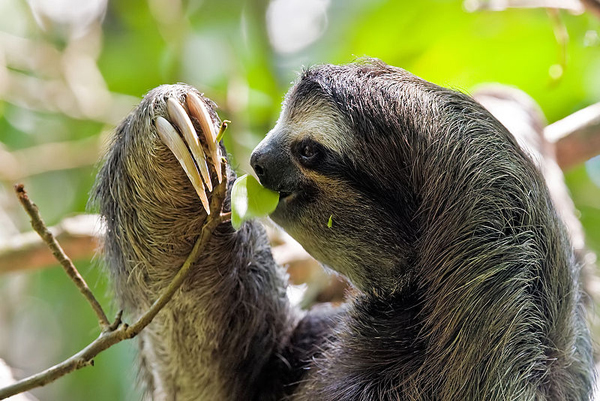 Observations of the sloths allowed the scientists to estimate female reproductive timing and frequency. Researchers estimated sloth survival rates using information from radio collared adult males over a two-year period. These data were then used to estimate the population growth rates for each of the species. Lastly, the team employed an innovative genetic kinship approach to estimate the degree to which immigrants contributed to the population growth of each species.

Not surprisingly, their findings indicated that both species avoided monocultures and human development, preferring intact tropical forest patches instead. The two-toed sloth used some pastures, while the three-toed sloth avoided pastures altogether. Both species also slightly avoided or showed neutrality toward the shade-grown cocoa crops.

Peery and Pauli concluded that the two-toed sloths in their study area constituted a stable population, and even demonstrated positive population growth. However, the population of three-toed sloths did not fare nearly as well and relied on immigration from adjacent, intact ecosystems.

The greater adaptability of the two-toed sloth in its use of habitat and resources explains its better success among shade-grown crops, according to the researchers. On the other hand, the three-toed sloth’s more specialized diet and habitat requirements meant the species couldn’t survive solely in shade grown cocoa plantations.

In a broader sense, these conclusions contribute to our understanding of how other Neotropical arboreal mammals, such as primates, may fare in modified habitats. As Peery and Pauli explain, “our results indicate that some generalists are more resilient to the conversion of tropical forests to shade-grown agricultural systems than specialists.”

Therefore, while shade-grown agro-ecosystems, such as the cocoa plantation in Costa Rica, support more animal species than monoculture systems, they may be inadequate for habitat specialists like the three-toed sloth.

The researcher’s findings imply that shade-grown agro-ecosystems are not the magic answer to biodiversity loss. Rather, they are a positive alternative to be used with other conservation strategies.

Darcy Widmayer is a M.Sc. student in the Nelson Institute for Environmental Studies at the University of Wisconsin-Madison.