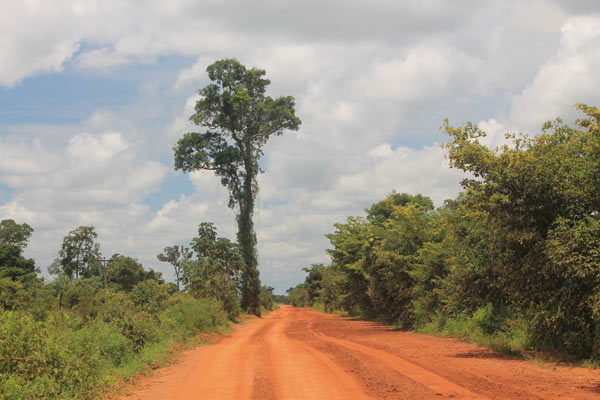 Farmers in north-central Brazil, where the savanna meets the Amazon rainforest, are clearing land at an unprecedented rate. The government hasn’t stopped the cutting, partly because it is using inaccurate, outdated maps that hugely underestimate the extent of its endangered dry forests. State regulators in Tocantins have continued using the old maps, even after commissioning superior, detailed vegetation maps that could identify at-risk forest patches and help curb deforestation.

“Years from now when we are without water, they will regret it,” says Ricardo Haidar, a forest engineer based in the city of Palmas. “The government paid for the study, but they are not using the data.”

Tocantins, Brazil’s newest state, was named in 1988 after its shape which looks like a toucan’s beak with the tip pointing north toward the Amazon River, some 400 miles away. Though the majority of the state is within the biodiverse savanna known as the Cerrado, it has some of the region’s most extensive forests and forms a critical transition zone that merges into Amazonia.

In December 2014, Kátia Abreu — the Tocantins senator who environmentalists have called “Miss Deforestation” and the “Chainsaw Queen” — was named Brazil’s Minister of Agriculture, putting the state’s poor environmental record in the national spotlight. All along the Belem-Brasilia Highway, one of the state’s major north-south thoroughfares, locals have watched Tocantins’ forests being razed for soy and rice crops at a stunning pace. Forests in this corner of the Cerrado shrank by 66 percent between 1977 and 2008, and they will likely vanish completely in the next 25 years unless action is taken, says a 2013 study published in Biotropica. 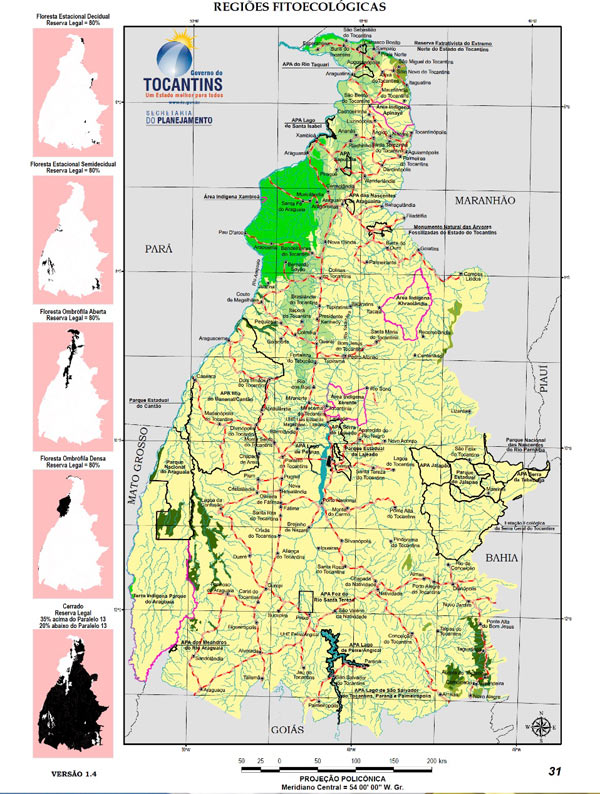 The 2008 outdated inaccurate vegetation map for the state of Tocantins. Map credit: Tocantins Department of Planning. Click to enlarge. 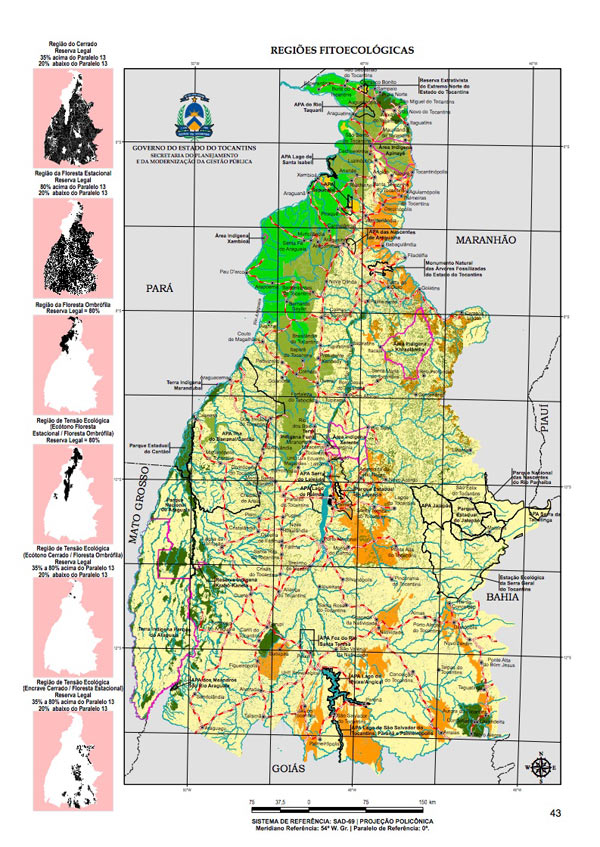 The high resolution map of vegetation zones in Tocantins from 2012 doubled the amount of land area previously classified as forest. This increase was largely due to the recognition of small patches of seasonally dry forest, “Floresta Estacional,” which now account for 13.1 percent of the historic land cover. Map credit: Tocantins Department of Planning. Click to enlarge.

Tocantins’ forests are supposed to merit special protection in Brazil. It is one of nine states that make up the Legal Amazon, or “Amazônia Legal.” Under Brazil’s forest code, landowners here are required to preserve 80 percent of the forest areas on their property, including both rainforest and dry forest, along with 35 percent of savanna areas.

Enforcement, however, is lax — which is where those old, imprecise maps come into the picture. The state environmental agency, Naturatins, authorizes cutting permits and penalizes landowners who clear more land than is allowed under the federal Forest Code. But identifying forestland and enforcing cutting regulations depends heavily on which maps you use.

The old, low-resolution forest maps employed by Naturatins work like a weak magnifying glass. While they show the bigger blocks of forest, the maps fail to show small patches of remnant forest. If those patches aren’t identified, then no one needs a permit to cut them down or is penalized for doing so. 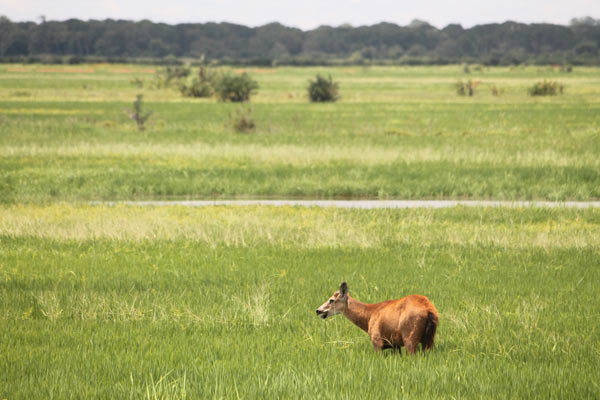 A marsh deer (Blastocerus dichotomus) grazes in a flooded rice field that was once forest. Photo credit: Brendan Borrell

In 2008, Ricardo Haidar was recruited to remedy the situation. He began coordinating field teams to generate a new World Bank-funded atlas for the Tocantins Department of Planning and Modernization of Public Management. The team worked for three years, combining detailed satellite data and field studies to identify 20 different Tocantins plant communities. These vegetative zones included two types of rainforest that occur in the Amazonian parts of Tocantins, along with eight types of seasonally dry forests found in the Cerrado biome.

Because the Cerrado includes so many dissimilar plant communities, and because many forests exist in small patches missed by the old maps, Haidar created a detailed atlas with a resolution of 1:100,000 — a scale ten times more precise than existing state maps.

This new atlas, published in 2012, doubled the extent of the state’s forest zones from 12 percent to 25 percent. This increase was largely due to the identification of thousands of tiny patches of dry forest, which Haidar says represent 13 percent of the state’s historic land cover, rather than 2.6 percent as shown on the state map from 2008.

In theory, this increase should make a larger swath of the state off-limits to deforestation and farming. The new atlas has not, however, been put to use by the environmental regulators at Naturatins. “I haven’t received the map yet,” says Renato Piris da Silva, one of the agency’s natural resource inspectors. He is still using the old one. “There are some political issues,” he admits, without going into specifics.

Ricardo Fava, the head of Naturatins, failed to respond to phone calls and emails for comment.

In an interview with Mongabay.com, Rodrigo Sabino Teixeira Borges, the director of Ecological-Economic Zoning at the Department of Planning, said that Naturatins’ delay in approving the maps was extraordinary, and that the booming agricultural sector has shown resistance to the changes. “It would have an impact on their production,” he said. Nevertheless, he added, discussions are ongoing, and he is optimistic that the 2012 maps his department produced will eventually be approved.

A view of a transitional forest on the boundary of the Cerrado and the Amazonian biomes in the state of Tocantins. Photo credit: Brendan Borrell

Such conflicts are not unique to Tocantins. “This is one of the big issues in Brazil,” says Luiz Gustavo Bezerra, the head of environmental law at Motta, Fernandes Rocha in Rio de Janeiro. “There is a lot of confusion over official maps.”

The continued use of the old maps in Tocantins is especially worrisome due to the state’s high deforestation rates. University of Brasilía plant physiologist Mercedes Bustamente says that what is needed to resolve the problem is a deep revision of the national vegetation maps from the Brazilian Institute of Geography and Statistics, which must then be integrated with state and municipal maps. “A coordinated national effort is not already in place,” she says.

Although Tocantins is one of the first states to integrate its environmental registry with a national system, Bustamente doubts that Haidar’s hard work will have a legal impact anytime soon. “A change that will double the area of forest in Tocantins is not easy to implement [especially] to make it valid for the analysis of deforestation permits,” she says.

Unfortunately, by the time the new maps are put into use, the last dry forests of the northern Cerrado might be gone.