UN report warns of grave consequences if mangroves not protected 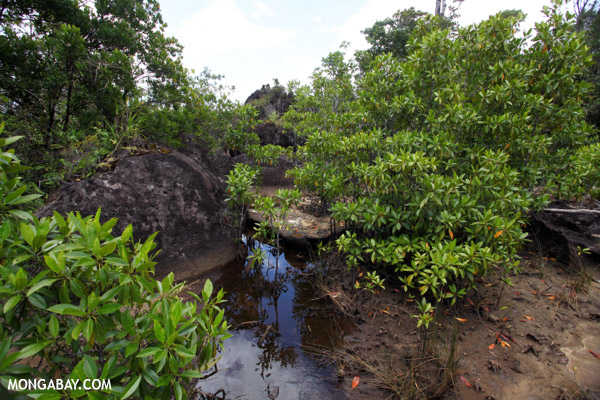 Global destruction of mangrove forests impacts biodiversity, food security, and the lives and livelihoods of some of the most marginalized communities in the world, according to the United Nations Environment Program (UNEP). Mangroves, which are forests of salt-tolerant trees and shrubs that lie along coastlines in the tropics and subtropics, are also invaluable carbon sinks. And we’re not doing nearly enough to protect them, says a recent report.

Released during the Lima, Peru climate conference in December 2014 by UNEP, the report found mangrove forests are being cleared 3-5 times faster than terrestrial forests, costing the world as much as $42 billion in economic damages every year.

For instance, between 2000 and 2010, some 771.07 square kilometers (77,107 hectares or 190,535.5 acres) of Central Africa’s mangroves were cleared or degraded, according to UNEP, releasing over 100 million metric tons of C02 and costing billions in infrastructure maintenance and repairs.

Mangroves still occupied a large portion of Gabon’s coastline as of 2000, according to data from Global Forest Watch. However, the data indicate some mangroves have been whittled away, with those surrounding Akanda National Park showing signs of forest loss. In total, the area shown in the top-left inset lost more than 2,500 hectares of tree cover from 2001 through 2012 – or more than 4 percent of its forested area. Click to enlarge.

“The economic costs at the time of the research include $11,286 per hectare in seawall replacement, and $7,142 per hectare in benefits for protection of rural infrastructure against shoreline erosion ($151,948 per hectare for urban mangroves),” the UNEP report notes.

The social costs are substantial as well. “As calculated by the Interagency Working Group on Social Cost of Carbon, for the year 2015, the lower end estimate of the social cost of carbon is likely to be $15,588 per hectare, with the higher estimates coming in at $151,983 per hectare,” the report states.

But the costs are not all monetary, with mangroves providing many ecosystem services to coastal communities.

“In the Caribbean, for instance, mangrove-lined ‘hurricane holes’ have functioned for centuries as safe-havens for boaters needing to ride out storms. Meanwhile, the complex network of mangrove roots can help reduce wave energy, limit erosion and form a critical barrier to the dangers posed by the strengthening tropical storms, cyclones and tsunamis which have been assailing coastal communities in recent years due to climate change,” according to the UN News Centre.

Mangroves are also some of the most carbon-rich forests in the world. Every hectare of pristine mangrove cleared in Central Africa releases 1,299 metric tons of CO2 into the atmosphere, for example. Meanwhile, the 437,300 hectares (1,080,592 acres) of intact mangrove confer climate benefits of as much as $66 billion, by UN estimates.

It’s not just Central Africa’s mangroves feeling the heat, of course. As reported by the World Resources Institute (WRI) using Global Forest Watch data, we lost 192,000 hectares (474,000 acres) of mangrove forest between 2001 and 2012, 1.38 percent of the world’s total.

“The escalating destruction and degradation of mangroves – driven by land conversion for aquaculture and agriculture, coastal development, and pollution – is occurring at an alarming rate, with over a quarter of the earth’s original mangrove cover now lost,” UNEP Executive Director Achim Steiner says. 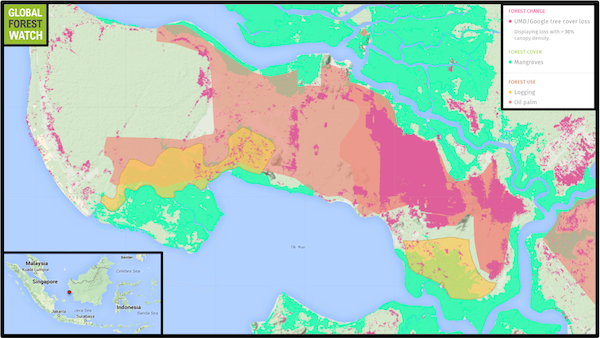 Many of Kalimantan’s mangroves show signs of tree cover loss due to human activity, according to data from Global Forest Watch. Click to enlarge.

With around 90 percent of mangroves found in developing countries, UNEP and other organizations assert there is a need for a mechanism by which the developed countries of the world, which are largely responsible for the climate crisis facing our planet, essentially pay developing countries to keep forests intact even as they look for ways to boost their economies and raise their standards of living.

Yet mangroves thus far have not been considered as part of REDD+ strategies at the UN climate talks (REDD stands for Reducing Emissions from Deforestation and Forest Degradation, a set of mechanisms for lowering deforestation rates in developing countries; REDD+ aims to add safeguards that would conserve primary forests and encourage sustainable management of forests and carbon stocks).

Steiner says that this is a huge missed opportunity for the developed world to not only address the climate crisis, but also to compensate the developing countries of the world that are likely to suffer the most dire impacts of a climate crisis they did not contribute to.

“As the latest Emissions Gap Report makes clear, countries are increasingly aware of how much progress they need to make to limit a global temperature rise to 2°C,” Steiner says. “Developing countries have a major climate change mitigation and adaptation asset in the form of mangroves because they hold several times more carbon than terrestrial forests… What is needed now are the right carbon finance mechanisms, and policy interventions, in order to reap the true economic, climate and social gains from this critical ecosystem, which we cannot afford to lose.”

According to Steiner, part of the answer lies in ensuring mangroves have a place in REDD+ strategies and other low-carbon development strategies such as National Appropriate Mitigation Actions.

By protecting mangroves through such strategies, conservation organizations are hopeful that they may be saved.

“As countries race to protect their forests, they must also protect the vital mangrove ecosystems along their coastlines,” states WRI in their blog post. “With continued data analysis, conservation, management and restoration, we can halt the loss of the world’s remaining mangrove forests and begin to reverse it.”