Militant terrorist group Al-Shabaab funds itself, in part, through the illegal production and sale of charcoal, turning Somalia’s trees into “black gold.” Because areas of the country controlled by the group aren’t accessible to researchers, it’s difficult to determine just how many trees are cut down to fuel Al-Shabaab’s violent agenda.

So Michele Bolognesi, a researcher at the University of Twente in the Netherlands, decided to use satellite imagery to solve that problem. His team’s results were recently published in the scientific journal Energy for Sustainable Development.

As the study states, there is a critical need for data on tree loss in Somalia.

“Despite high exports of charcoal from Somalia, and its contribution to tree cover loss, consequent land degradation, and reduction of ecosystem services provided by trees, little quantitative information on tree cover loss in Somalia during the past two decades is available,” the authors write. “Moreover, Somalia is predicted to be one of the nine African countries that will face water scarcity by 2025, and therefore land degradation will worsen the water scarcity effects by increasing the population’s vulnerability to drought.” 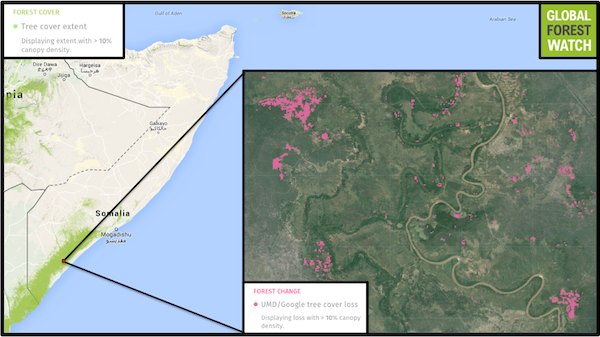 Somalia is sparsely forested. Data on tree cover loss is available from Global Forest Watch (GFW), but is limited to areas where forest covers more than 10 percent of the ground. As such, GFW shows only 6 percent of Somalia has significant forest cover, all of it located in the far south of the country. The inset map shows satellite-detected tree cover loss from a portion of Bolognesi’s study area occurring from 2001 to 2011. Click to enlarge.

The researchers found that between 2011 and 2013, a survey area of 5,000 square kilometers (1.2 million acres) under Al-Shabaab control produced some 24,000 metric tons of charcoal, which can fetch as much 10 million Euros ($11.2 million) when sold, usually in markets on the Arabian Peninsula.

Producing that much charcoal required 372,000 cubic meters of biomass (over 13 million cubic feet) — or, in other words, 438,000 trees, amounting to 2.7 percent of the total tree coverage in the surveyed area.

Though it’s less than one percent of Somalia’s total land area, 5,000 square kilometers is still too much for one person to visually scan on their own, so the researchers used a semi-automated approach, letting algorithms pore over two years of satellite imagery in search of the telltale burnt circles that marked a charcoal production site.

“Charcoal kilns are built less than a few hundred meters from where the trees are felled to reduce transportation costs,” Bolognesi explained to mongabay in an email. “An individual kiln is used just once. Production moves on to exploit the next area with available trees.”

Bolognesi hopes that this work will lead to better monitoring of charcoal production across the entire country of Somalia, because the problem is certainly not confined to the study area. “It is likely that charcoal production takes place in a much larger area, particularly in south and central Somalia, where Al Shabaab has controlled large areas and despite declining territory, still gets major benefit from charcoal production. Charcoal is also produced in northern Somalia (current (sic) Puntland and Somaliland) as evidenced from earlier satellite studies.” 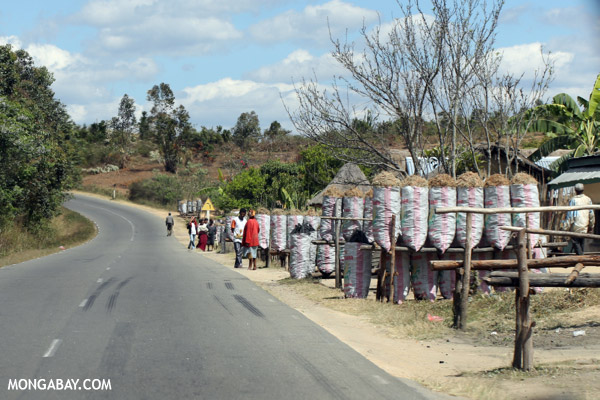 Charcoal production is rife in many parts of Africa. Here, charcoal is sold along a road in Madagascar. Photo by Rhett A. Butler.

Charcoal production in Somalia spiked sharply over the past two decades, reaching an estimated 1.2 million metric tons in 2012, up from 420,000 metric tons in 1991, the year the country’s central government collapsed. Only a fifth of the charcoal is consumed in Somalia, the rest being shipped off to the Arabian Peninsula where demand is high despite the ban on Somali charcoal exports put in place by the UN in 2012.

Of course, it’s not just Al-Shabaab looking to cash in on this Somali black gold rush. The illegal trade is apparently so robust that a report from the United Nations Environment Programme last year found that setting up roadblocks and imposing a “road tax” on charcoal shipments is another one of the militant group’s primary income streams. According to the report, Al-Shabaab can make as much as $18 million per year from just one road block.

In the end, for all the solutions Bolognesi’s work may provide to tracking and monitoring deforestation in Somalia, the true environmental impact can’t be fully assessed at this time.

“With forest degradation comes degradation of ecosystem services,” Bolognesi said. “Tree loss is affecting traditional pastoralism and likely has a negative effect on biodiversity and wildlife. However, it is impossible to effectively study such impacts in detail in the study area due to the security situation.”