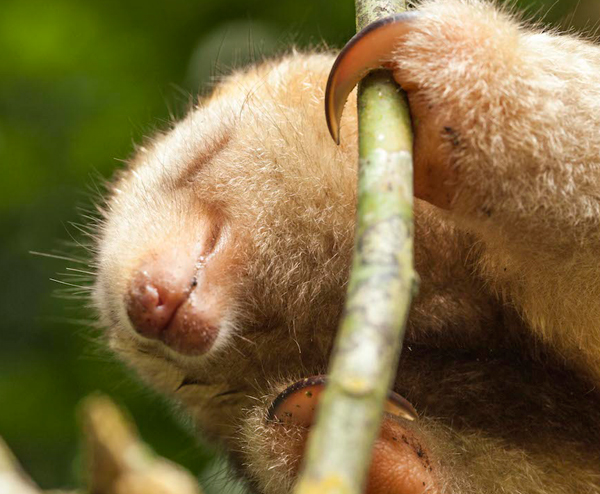 You wake up at 4:30 AM, a little before the first rays of tropical sun begin to dance behind the treetops. You put on your wet clothes from the previous day, pack your bag, and pick up your tripod. The jungle is shrouded in a thick mist from the previous nights rain.

As you walk, you recognize many of the strange calls that echo between the trees. The guttural grunts of a male red howler monkey, the haunting song of the musician wren, and the first waves of cicadas. As you arrive at the lakeside you set the tripod down and sit next to it. Then, you wait, sometimes for minutes, sometimes for hours and sometimes for days. The longer you wait the more you notice. Millipedes crawl around here and there, colorful birds swoop by and stop to investigate you and the odd agouti strolls past. Almost everywhere you look there is something new and something moving. For all its difficulties, it is a place of unimaginable beauty and unprecedented complexity.

The calls of the giant otters are distant at first, but gradually draw closer. The cubs are still small and can’t yet hunt for themselves so they whine constantly and pester the adults to pass them a fish or two. You press record, pan the camera and take a small, inadequate snapshot of the intricacies of their lives. 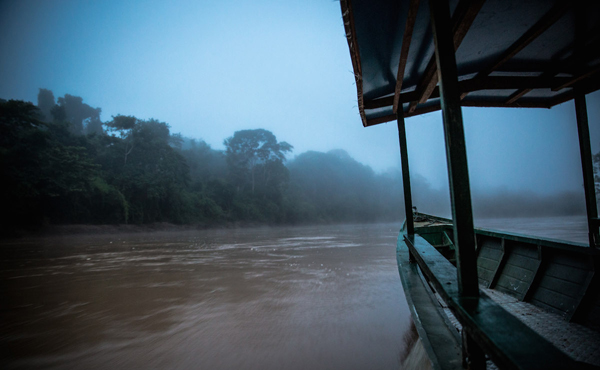 It was on one such tranquil morning that I first heard the chainsaws, tearing through the forest.

A week later, on an overcast afternoon I was sitting in a native community watching some animals that had been rescued from passing loggers, there was a scarlet macaw with one of its wings cut off and a tiny infant spider monkey shaking against a window frame and calling for its mother.

But I couldn’t stay for long and I was soon sitting on a boat traveling up the river. The driver was using a faster engine than he usually does because Pepe, the guy who runs the small conservation concession we were filming, got a call via radio that loggers were cutting wood illegally on his land.

Pepe had his documents ready and planned to arrest the illegal loggers and take them to the police station in town a full day’s boat journey back the other way. At the time I was curious about how easy it would be to persuade six strong men to take a boat ride to prison when in every other direction, freedom awaited them. But Pepe seemed quite confident that we wouldn’t have a problem. 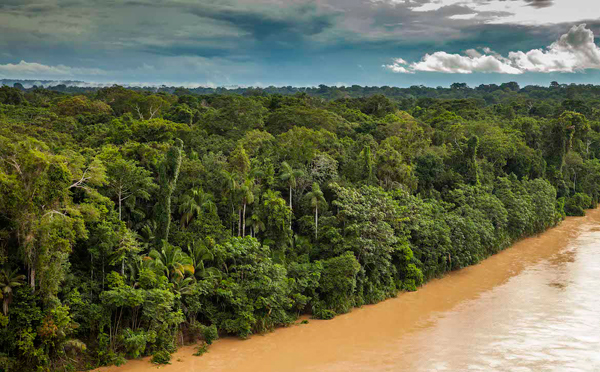 Rainforest along the Las Piedras River from the air. Photo by: Tristan Thompson.

We sped up the river for hours just daydreaming and watching the birds fly overhead, that was until David the boat driver shouted my favorite word: ‘Jaguar.’ We pulled up to a sandy beach and sitting right in the middle was a massive male with an interesting black mark around his eye. It was a stunning sight, the jaguar close to the size of an African lion I’d seen in a zoo a few months prior. It just lay there and watched us and we were able to spend several minutes gazing out in awe at this wonderful beast, its big paws draped over a lip in the sand.

After seeing the jaguar we were all in high spirits and as we got closer to the film site we almost forgot about the loggers. Then at the edge of the river we saw a new track that the loggers opened in the forest. We pulled the boat up but found their camp empty, but they had obviously left in a hurry as there were still machetes and clothes lying around accompanied by forty large blocks of wood piled up ready to load on a boat. Someone had warned them.

Spider monkey bones were littered around the camp, I’d bet from the mother of the infant we saw in Lucerna and probably a monkey we’d already filmed. We followed a trail—bordered by tire tracks and several meters wide—that lead deep into the forest. It was quite astounding to see how much logging these people had done in just a few days. Then I could see that we were nearing a clearing, an open space in the canopy where the tropical sun beat down fiercely. We saw that an immense kapok tree, maybe 400-years-old had been torn down and cut into pieces, even lying on its side the trunk was taller than I am. Further along the trail there was another equally massive tree cut into neat blocks. 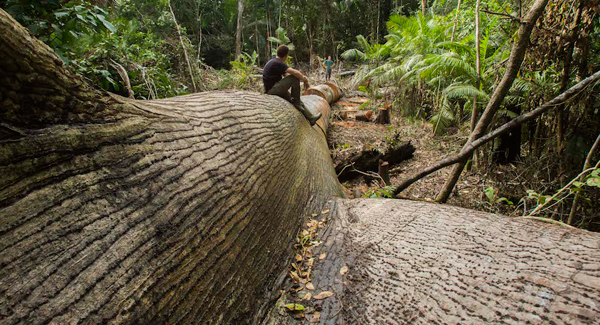 The filmmakers sitting on the massive kapok tree felled for timber. Photo by: Tristan Thompson.

Pepe had to pay a man from the police to come out with us; he counted the blocks of wood and sprayed the fallen trees with blue dye. The loggers had cut the wood just meters from a prohibition sign. The planks they would have gotten from the trees were of poor quality and not suitable for use in construction here in the jungle. But they would have been worth $1,800 at the sawmill, if they had gotten away with it all.

A few weeks later I was back in a logging camp but this time for a different reason. I’d made friends with five guys who were cutting wood on the river and they decided to let us film them. Although I hadn’t talked much about conservation, one of them certainly perceived that I had a strong interest in the natural environment. So, as we sat around a campfire in the waning light of a jungle evening, he began to tell me his story. 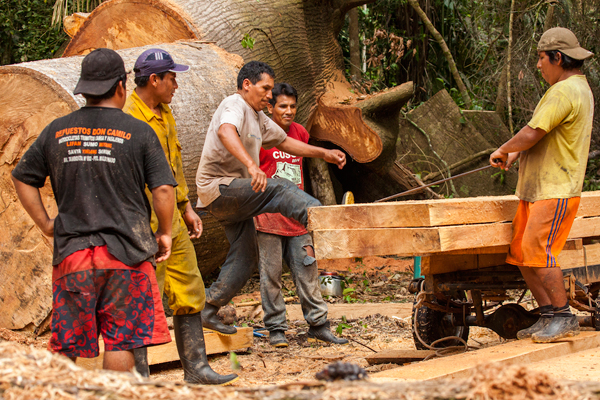 As an orphaned boy he patrolled the streets of Cuzco shining the shoes of wealthy businessmen and tourists. Then at eighteen he met a girl and moved to the jungle where the government was inviting families to take land, set up farm, and colonize an area that had previously been economically unproductive. With no resume or qualifications to speak of, the only work he could get was out in the forest was collecting brazil nuts and cutting wood.

Back then there was a lot of wood close to Puerto Maldonado and he didn’t have to travel far to work. He used the money from the logs he sold to build a modest house on a small patch of land and gradually built up a shed of spare parts for chainsaws and vehicles to transport the cargo. Once he had enough equipment he started his own logging team and paid concession owners a share of the profits to take wood from their land. With the money he earned he sent his two children to university in the city. One is now an engineer and the other works with computers. He said that he would much rather have an easier life working in conservation or in tourism but how was he supposed to do that without qualifications, without command of the English language, or any employable skills besides cutting wood and fixing chainsaws? 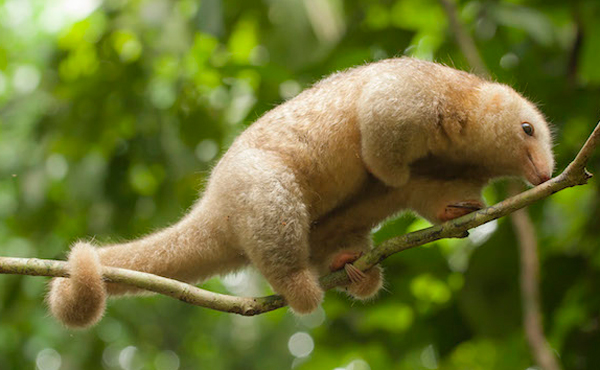 Such are the stories of life here on the Las Piedras River of south-eastern Peru. Whilst the river itself is not so materially different from others in the region, its lower reaches are in large part unprotected. Its headwaters however are afforded some protection and are home to some of the world’s last uncontacted tribal groups along with the narco-traffickers, whose planes fly over the forest daily. Logging is rife here but the wealth of wildlife is still quite astounding with endangered species of all kinds still present and thriving in numbers I haven’t seen in nearby reserves. Black spider monkeys can be found in groups of more than a hundred and there are giant river otters, monstrous catfish, and black caiman living in the lakes and streams. Not so long ago, we even found a silky anteater which is easily the rarest, cutest, and least known of the three anteater species; it was fast asleep in a small tangle of liana’s. The macaw population is also very high. At one clay lick I saw more than a hundred red and green macaws feeding at the same time.

But all of this may not be here for long. Two weeks after going upriver, a family stopped by the film site, they had just shot a big male jaguar with a black mark around his eye.

Tristan Thompson is the director of an upcoming documentary about the Las Piedras River ecosystem in the Amazon. For more on his adventures and the upcoming film see: Uncharted Amazon.