Worms come in all different sizes, shapes, textures, colors, and flavors. Some attack human digestive systems, some surface after a rainstorm, and some come in plastic wrappers, covered in sour sugar, at the local grocery store. Despite their similar features and anatomies, many of the real worms (not the sugar kind) demonstrate convergent evolution, meaning they are not related but have independently evolved similar features.

One such family of worm-like animals are the caecilians, which are actually amphibians in the order Gymnophiona. Caecilians are worm-like in their lack of legs and presence of annuli (ringed segments). Recently researchers described three new caecilians in the genus Ichthyophis in Vietnam and Cambodia in a new paper in Organisms Diversity & Evolution. 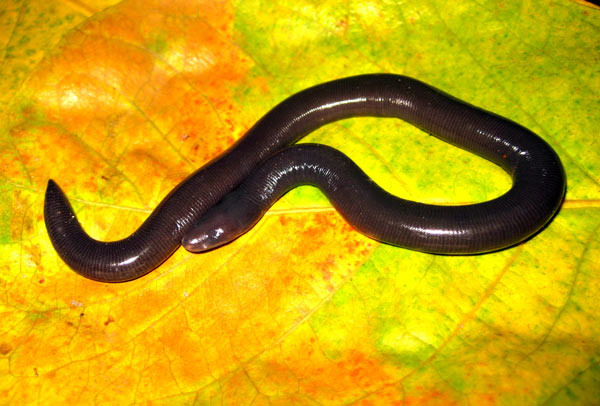 Scientist Peter Geissler and his collaborators discovered the new species after 95 days of fieldwork, mainly in Indochinese national parks. They found caecilians on leaf litter, under rotten logs, along steam beds, and within drift fence traps. From the samples they found, the scientists measured a variety of factors: tail length, distance from posterior end to tip of vent slit, teeth length, etc. They also preformed DNA sequencing for molecular and morphological analysis. As part of their research, the scientists both amended previous descriptions of known caecilians in the region as well as describing their newly-found species.

First described in 1864, the Ichthyophis genus has undergone several re-categorizing events. In the recent past, biologists classified five species residing in this region, dividing them into two clades based on the presence or absence of a lateral yellow or cream-colored stripe. These stripes develop after hatching and different caecilians exhibit them at different times, depending on the species.

Now, the researchers detail the presence of three news species, all unstriped. These three species represent the minority in a genus that encompasses 48 species, 27 of which are adorned with a yellowish stripe. 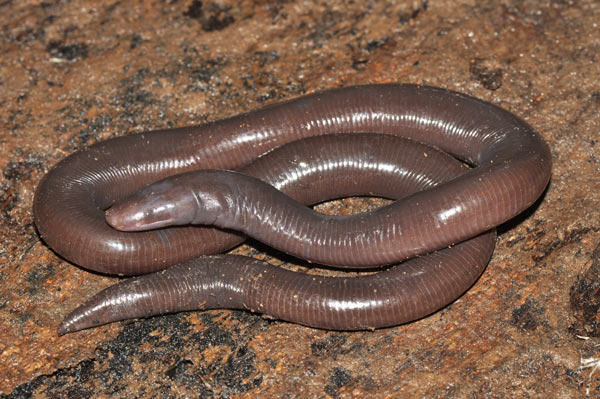 They also detail their findings of species Ichthyophis catlocensis and Ichthyophis chaloensis, both from Vietnam. Ichthyophis catlocensis looks different from others in the proximity of its tentacle to its eyes rather than nose, greater numbers of teeth and annuli, different scale locations, larger eyes, and smaller snout. The researchers named this species after the Cat Loc area of the Cat Tien National Park, emphasizing the park’s valuable biodiversity.

Though these discoveries are remarkable in their own right, the researchers remain humble.
“Southeast Asia is one of the global centers of species richness for caecilian amphibians (Order Gymnophiona), currently hosting about 15 percent (29 of 200) of the globally known species,” they write, “However, the number of described species in Southeast Asia is likely to be greatly underestimated.”

Perhaps the most important outcome of their analysis is a better understanding of the biogeography of the whole region. Vicariance, the change in geography (e.g. the formation of a mountain range via tectonic plate activity or formation of a body of water) that separates a species, often results in the formation of new species. Susceptible to this sort of fragmentation that characterizes Indochina, caecilians of this region serve as an indicator species. Studying their history leads to understanding on a larger scale about the previous shapes of the continents and land forms, as well as weather and climate patterns, that have changed and shaped regional ecology, over time.