New species of monitor lizards found on the black market 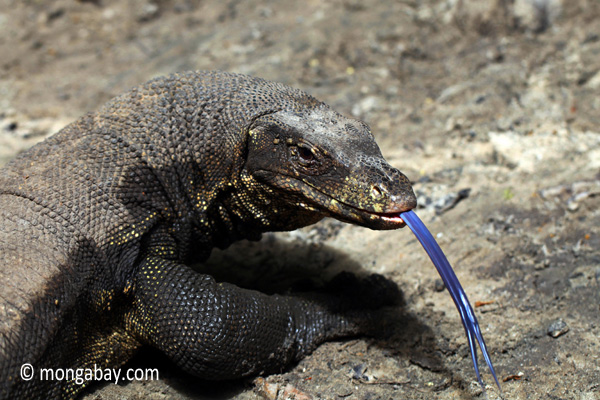 Monitor lizards, like this water monitor in Malaysia, are popular both in the pet trade and for consumption. Photo by Rhett A. Butler

Searching the globe for undiscovered species takes biologists to far and remote locations, trekking through exotic locales that may yield a new discovery. However, exploring the black market can also produce results. And this is just the case for Rafe Brown, curator of the University Of Kansas (KU) Biodiversity Institute, during a recent visit to the Philippines. In a black market in Manila, Brown and his colleagues discovered two new species of water monitor lizard for sale.

“Both are gorgeous, black-and-white or black- and yellow-colored animals,” stated Brown. “They are dark in general appearance with bright speckling of white or yellow spots arranged in rows and stripes around the body, as if wearing shining necklaces. One gets up to a little over three feet in length, and the other is somewhat larger at about four feet. They’re monitor lizards, so they’re alert, with large eyes, continually flicking long tongues, which they ‘smell’ with, and they’re generally very alert and look quite intelligent.”

The black market is an unfortunate resource that Brown and his peers use to keep track of Philippine’s mega-biodiversity.

“Over a five-year period we visited pet markets, roadside bush-meat stands, and various other markets where monitor lizards were sold as pets or meat,” said Brown. “We used to walk around pet markets and side streets talking to traders using circuitous conversation and eventually getting around to asking them if they had ‘anything else’ behind the scenes or in the back room.”

Black markets in the country put all manner of wildlife and wildlife parts up for sale from ivory to sea turtles and, in this case, lizards as a meal or potential pet.

Brown, who has spent much of his career recording and conserving the abundant wildlife of the Philippines, obtained the lizards and took them back to the KU for genetic analysis. Much to the researcher’s surprise, the lizards were genetically unique and unidentified in the world of science.

“They were confused with species that were physically very similar in scale numbers, shapes, color patterns and body size,” he said. “But even though they looked similar, it now makes perfect sense to us in hindsight that they should be distinct and considered separate species because they come from different areas — a separate island in one case and an isolated peninsula in another. Both have been isolated for considerable geological time.” 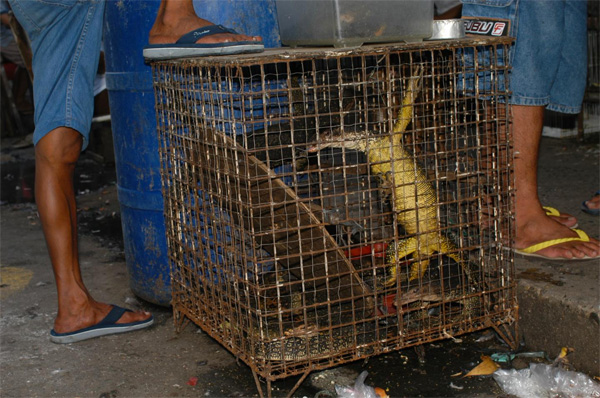 On the Philippine black market, undercover KU researchers found this monitor lizard for sale as an exotic pet — so exotic it was unknown to science. Caption text by University Of Kansas. Photo Credit: Sy Emerson

Exploring black markets and purchasing wildlife is essential to conserving species. But how this illegal commerce is performed is changing rapidly.

“Two years ago, deals were frequently made in the back alleys of streets of Manila,” Brown said. “Today, Facebook is the primary means with which unscrupulous individuals deal in wares of illegally harvested wild animals.”

To make effective policy and enforce laws, those on the right side of the law must know just what is being protected and how such protections are enforced.

Collecting animals from the exotic pet trade and bushmeat industry can lead to the creation of genetic databases that, according the Brown, “empower local enforcement officials with the forensic, scientific and legal means of establishing a confiscated animal’s provenance.”