Although it’s a hotspot of avian biodiversity, the Indonesian island of Sulawesi has been “poorly studied ornithologically,” according to a study published in the scientific journal PloS One.

Case in point: the subject of the study, a new species of flycatcher first observed in 1997 but not formally described by scientists until November 2014.

Sulawesi is home to 42 other known endemic bird species, the most among tropical islands of comparable size.

The new species, the Sulawesi streaked flycatcher, has shorter wings, a shorter tail, a more prominently hooked bill and higher-pitched chirps, trills, and whistles than its closest relatives. It also has distinct plumage, including a plainer face and the streaked throat that gave it its common name.

Flycatchers, genus Muscicapa, are small perching songbirds found across Africa, Asia and Europe. The Sulawesi birds were thought to be gray-streaked flycatchers (Muscicapa griseisticta), a migratory species that winters in Sulawesi, until DNA analysis showed them to be only distantly related. The Sulawesi streaked flycatcher’s closest relative is the Thailand population of the Asian brown flycatcher (M. dauurica siamensis), according to the study.

“Considering that 98 percent of the world’s birds have been described, finding a new species is quite rare,” said J. Berton C. Harris, a postdoctoral fellow at Princeton who co-wrote the study, which was funded by the National Geographic Society.

The species was given the Latin name Muscicapa sodhii in homage to National University of Singapore professor Navjot Sodhi, a former mentor of Harris’s.

The birds live in lowland and submontane evergreen forests as well as disturbed habitats throughout Sulawesi. The area where Harris and team found their first specimen “was a mosaic of mature cacao plantations and small patches of remnant forest trees” abutting mature secondary and primary forest in Lore Lindu National Park, the team wrote in the study.

An analysis of Global Forest Watch data shows that the area of Central Sulawesi where Harris and team collected their specimens, from the village of Baku Bakulu down to Lore Lindu National Park, lost 3,619 hectares (8,943 acres) of tree cover – representing more than 2 percent of its forested area – between 2001 and 2012. In comparison, Central Sulawesi lost 326,882 hectares (807,743 acres), or 5 percent, of its total tree cover in that same time period. 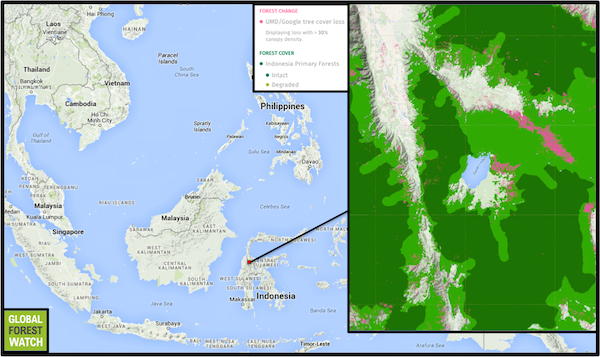 While the region in which the Sulawesi streaked flycatcher lives has been less affected by tree cover loss than Central Sulawesi overall, Global Forest Watch data shows large areas of primary forest in the area have been degraded since 2000. Click to enlarge.

Though it requires at least some mature native forest trees, the Sulawesi streaked flycatcher has been observed living among agricultural operations and degraded forest with such frequency that it is believed to be “tolerant of disturbance,” hence it is probably not endangered at this time, the study says.

“The fairly wide elevational and distributional range of M. sodhii, and its tolerance of habitat disturbance indicate that it is not immediately at high risk from logging or habitat conversion, which is ongoing in Sulawesi’s lowlands and, increasingly, highlands,” write the authors.

The new species may not require pristine rainforest to survive, but its future is by no means guaranteed.

“At this point, the species is not at risk for extinction,” said co-author Pam Rasmussen of Michigan State University. “However, this could change if agriculture intensifies in this region.”