Nearly two-thirds of tropical forests in Southeast Asia have been degraded by logging, agriculture and other human uses, and their fauna have been decimated by hunting and the bushmeat trade. But if those degraded tropical forests are to recover naturally, they will need to rely on their remaining large wild animals to disperse large tree seeds, according to a new study.

The study published in mongabay.org’s open-access journal Tropical Conservation Science examined the importance of large mammals such as wild primates, deer, civets, wild pigs, and tapirs to the dispersion of large seeds throughout the Harapan Rainforest of Sumatra, which has been degraded by logging and agriculture. The researchers found that large, wide-ranging, animals were vital to the restoration process of this forest, and by extrapolation other degraded forests across Southeast Asia.

The Harapan Rainforest is located in the eastern lowlands of Sumatra on dryland soils with an elevation ranging from 98-394 feet (30-120 meters). It is one of the first Ecosystem Restoration Concessions of its kind in Indonesia, covering 3809.5 square miles (985.5 square kilometers) that have previously been heavily logged or cleared and burned for farming. Industrial oil palm, rubber, acacia plantations, and small-scale agriculture operations exist on the periphery of the site. The least disturbed portions of the rainforest are characterized by a closed canopy, and a mix of large animal species common in lowland rainforests.

Digital camera traps were installed throughout the Harapan survey site to monitor terrestrial mammals. Data was collected from camera traps at 148 locations for a 30 day duration, with a cumulative time period of 4,155 days. 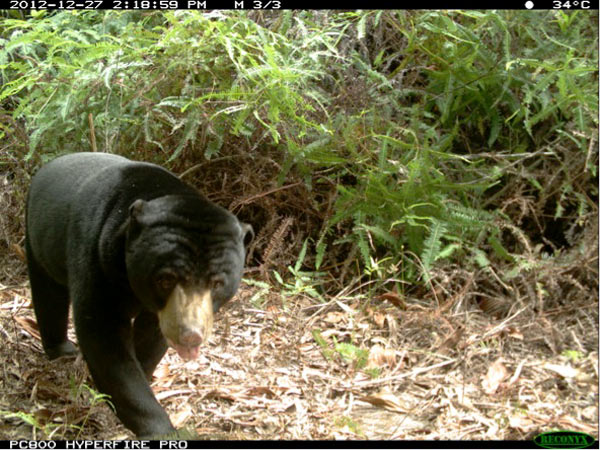 Seed dispersing terrestrial mammals captured by the cameras were ranked by a number of factors, including the capacity and propensity of the species to ingest or carry seeds rather than chew or immediately discard them; the average distances the animals traveled; the variety of tree seed species they consumed; and, wherever possible, the viability for germination of excreted seeds. The amount of forest canopy cover at camera locations was evaluated based on satellite imagery obtained simultaneously with the collection of camera trap data.

The study revealed that the most common species of seed dispersers were the pig-tailed macaque (Macaca nemestrina), red muntjac (Muntiacus muntjak), Eurasian wild pig (Sus scrofa), lesser mouse deer (Tragulus kanchil), Malayan tapir (Tapirus indicus), and all species of civet. Sun bears (Helarctos malayanus) and Malayan Tapirs (Tapirus indicus) were recorded at around a third of locations. Only ten camera trap locations lacked any record of potential dispersers, and the two main mammalian species not recorded at any location were the Orangutan (Pongo abelii) and Sumatran Rhinoceros (Dicerorhinus sumatrensis).

“The most striking result from our survey of terrestrial mammalian seed dispersers in a degraded lowland forest in Sumatra is that a high diversity of species were retained and at comparatively high levels of occupancy, despite high levels of habitat degradation,” wrote the researchers. “These species can therefore be regarded as resilient to degradation, at least in the timescale we measured.”

The study concluded that forest degradation does not always lead to the loss of large terrestrial seed-dispersing animals, and therefore, proper protection is required for these species from outside threats. The regulation of hunting, bushmeat trade and logging are all important to the forest management plans of restoration concessions if these forests are to regenerate naturally.

“We have shown that providing hunting pressure is low, such areas can harbor significant populations of many large mammals including some globally threatened species,” the researchers wrote. “Many of these species are important tree seed dispersers so can be expected to play an important role in the recovery of the vegetation in these areas, thus directly fulfilling the aims of such [restoration] concessions. The effective protection of large mammals in these concessions is therefore a win-win scenario for both forest restoration and biodiversity conservation.”