Just how useful is forest restoration? New study seeks to find out

Across the world, scientists estimate there are about two billion hectares of degraded forestland. In Indonesia alone, 25 million hectares of former logging concessions currently have no management, according to research. A study recently published in mongabay.com’s open access journal Tropical Conservation Science suggests this may represent an important opportunity for biodiversity conservation through restoration.

The authors write that restoration of degraded tropical forests, like those in Indonesia, can have many benefits, such as enhancing ecosystem services, improving habitat quality and biodiversity, and even generating income from timber and non-timber forest products [NTFP].

According to the study, full use of tropical forest restoration requires viable business models combining restoration goals with income generation. Currently, former logging concessions in Indonesia that are not managed are typically converted to oil palm or pulp-and-paper plantations. “However, despite over a decade of silvicultural management of humid tropical forests,” the authors write, “understanding of the natural successional processes and the (cost) effectiveness of restoration treatments in logged forests remains relatively poor.”

The study presents an overview of research, including three planned experiments designed to test the economic viability of large-scale restoration treatments in Sumatra’s Harapan Rainforest. Spread over 98,455 hectares, the Harapan Rainforest is a former logging concession and the nation’s first Ecosystem Restoration Concession. Managed by a private company and an NGO, the authors contend Harapan Rainforest represents a crucial opportunity for demonstrating the potential of ecosystem restoration as a viable land-use option for Indonesia’s logged-over forests.

Subjected to both legal and illegal logging over the past 20 to 30 years, approximately 20 percent of the Harapan Rainforest concession area has been illegally converted to small-scale oil palm plantations, particularly between 2004 and 2009 when active management was absent. Despite the degradation, the forest still supports an impressive diversity of wildlife, including more than 300 species of birds and 56 species of mammals such as tigers (Panthera tigris sumatrae) and elephants (Elephas maximus sumatranus). According to the study, the relative inaccessibility of this site and consequent lack of hunting probably contributed to the survival of such iconic species. 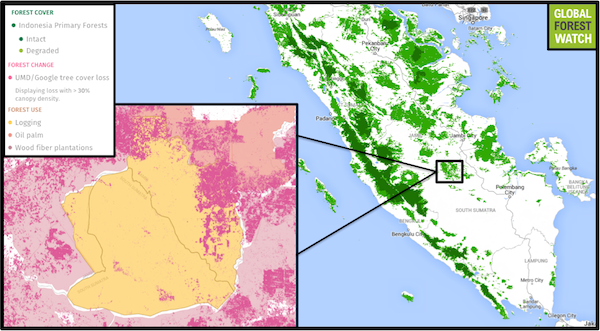 Harapan Rainforest, a logging concession-turned-Ecosystem Restoration Concession, straddles the border of South Sumatra and Jambi. According to Global Forest Watch, it is comprised of about 60 percent degraded primary forest, and lost about 13 percent of its tree cover from 2001 through 2012. However, most tree cover loss occurred in areas not demarcated as “conservation forest” (which mostly occupies the western half of the concession), and may not represent outright deforestation since plantation harvesting is also reflected in the data. Click to enlarge.

The study points out that native forests face substantial biodiversity loss when replaced with agricultural plantations and exotic tree crops, but forests that are degraded through logging can retain a large proportion of their original diversity. The authors also write that secondary forests re-growing on abandoned agricultural land can quickly recover their biodiversity levels if source populations are available.

Not only are these forests important carbon pools, but they also sequester carbon faster than mature forests do. The study says that restoration usually enhances the capacity of such forests to provide ecosystem services like fresh water for agriculture and human consumption, erosion and flood control, and local climate amelioration. Restoration can also replenish timber and NTFP resources, thereby at least partially justifying the retention of forests on economic grounds.

Through three on-going experiments at Harapan Rainforest, the researchers are examining the effects of restoration techniques such as selective thinning, enrichment planting and direct seeding on the rate of forest recovery in terms of timber and NTFP resources, biodiversity values and carbon stocks. At the time the paper was written, a large scale selective thinning trial had been implemented while other experiments were expected to start over the following three to five years. “We envisage that monitoring of these interventions will continue for at least 10 years, potentially much longer,” the authors write.

Accurately assessing the natural capacity for restoration is critical to determining the appropriate restoration treatment or intervention, the study states. Among the methods the researchers are using for their research are Unmanned Aerial Vehicles (UAVs), or drones, for rapid canopy surveying to help them assess habitat in specific regions of Harapan Rainforest. 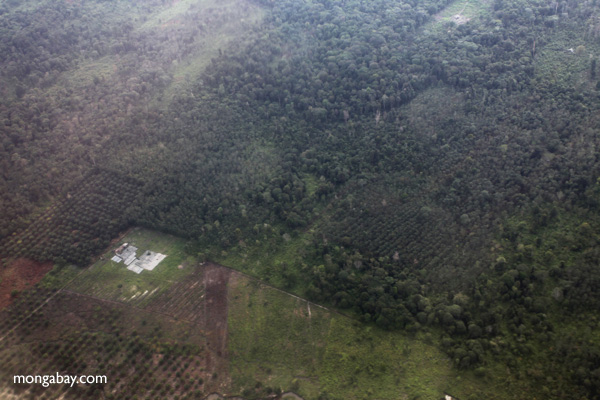 Logged and degraded forest in Jambi, Sumatra. Photo by Rhett A. Butler.

The authors write that opportunities to conduct large scale experiments in ecology are rare because of the expense involved and the difficulty in obtaining management rights. They believe their experiments carried out at Harapan Rainforest are not only important for improving understanding of rainforest restoration, but also for providing an opportunity to investigate many aspects of tropical forest ecology. They say the results from these experiments may enable the construction of cost-benefit functions for various restoration techniques and will help calculate benefits related to ecosystem functions. The researchers further believe that their findings may assist forest managers in the design of restoration techniques to enhance biodiversity, ecosystem services, and income generation by accelerating the growth of late successional forest species, including NTFP and high-value timber species.

According to the study, “human population growth and pressure on the land from plantation industries [in Southeast Asia] means that restoration must compete economically with alternative land-uses.” The cost of actively restoring the world’s two billion hectares of logged and secondary forests is conservatively estimated at $2,000 billion. However, the study cautions that knowledge of proper restoration techniques for degraded humid tropical forests and an understanding of cost-benefit functions and the trade-offs between various objectives like carbon sequestration, biodiversity conservation and timber or NTFP production, is lacking.

“The long-term experiments at Harapan Rainforest will go some distance towards addressing these knowledge gaps and results will directly inform the management and policy environment for ecosystem restoration concessions in Indonesia,” the authors write.