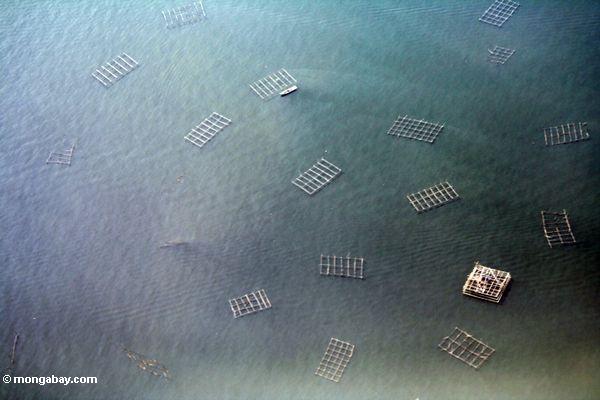 Wooden fishing rigs off the coast of Java. Photo by Rhett A. Butler.

The Indonesian fisheries ministry has introduced two divisive pieces of legislation aimed at increasing the sustainability of Indonesia’s depleted ocean fisheries. Permen KP 1/2015 imposes size limits on wild-caught lobsters and crab, and forbids catching egg-bearing crustaceans. Permen KP 2/2015 bans trawl and seine fisheries. Fishermen last Thursday demonstrated outside the Ministry to protest the damage this will cause to their livelihoods.

The new regulations will allow the fisheries to regenerate, according to the ministry. Size restrictions were introduced to stem the “natural decline in national lobster and crab populations.” The ministry’s background report on the issue noted: “For the long-term sustainability of the wild lobster population, the length of the average lobster landed in ports must be longer than the average length of lobster with mature gonads.” Seine nets and trawlers were banned because they “caused fish stocks in the Indonesian fishery management zone to decline and threatened conservation of stocks.”

In a recent press release, Ministry secretary general, Sjarief Widjaja, cited fish landing data that was eight to ten years old as explanation for the new trawl and seine ban. Widjaja said that the fish catch in Central Java halved between 2004 and 2007, because of heavier fishing pressure from the growing local trawling fleet.

“Trawling was actually banned by Presidential Decree in 1980,” said Achmad Poernomo, director general of the ministry’s research and development division. “Permen KP2/2015 simply emphasizes the law. It is a reminder,” said Poernomo. He had led the ministry’s preliminary research on size limits. 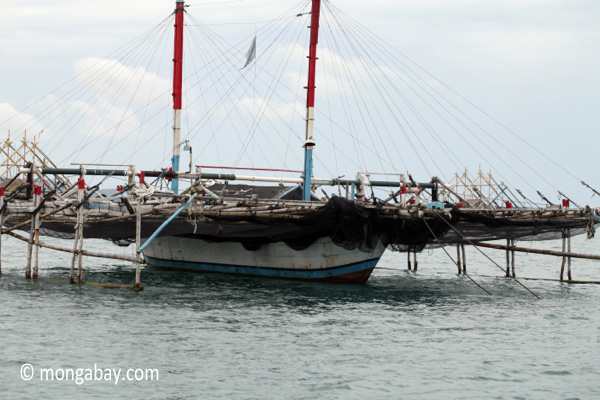 A Java fishing boat. Photo by Rhett A. Butler.

The Indonesia Blue Swimming Crab Association (APRI), is also a big proponent of the new law and a funder of recent stock assessments. Indonesia’s blue crab landings grew seven-fold between 1990 and 2009. Yet, the average size of crabs caught has gotten smaller, which indicates they were overfished, according to APRI’s assessment. Blue swimming crab made up nearly 10 percent of Indonesia’s total fishery exports in 2011 and 5 percent in 2013. The biggest export market for the crabs is the United States.

“When you see a species getting smaller, it means in my opinion that it’s experiencing some stress,” association member and CEO of Baltimore-based Phillips Seafood, Steve Phillips, told the Chesapeake Quarterly. Landing data gathered by the ministry from four of six ports (spread over North Sumatra, Bali, Lombok and Central Java) showed that the average size of landed lobsters was smaller than that of local sexually mature lobsters, indicating that many are being harvested before they can reproduce.

Led by Phillips Foods, the association is pursuing Marine Stewardship Council certification of sustainable seafood. They have taken numerous steps towards certification through the Sustainable Fisheries Partnership and their Fishery Improvement Project system. In 2009, APRI along with its American counterpart, NFI Crab Council, a U.S. association representing companies that purchase 80 percent of U.S. blue swimming crab imports, put $170,000 towards creating a stock assessment. In 2011, they committed as a group to not buy female crabs with eggs, and set a minimum size of eight centimeters (three inches) for all crab purchased. In 2012 and 2014, they reached out to the Indonesian government and sponsored trainings for the Research Center for Fishery Management and Conservation of Fishery Resources (P4KSI), which is in charge of stock assessments.

Although industry groups and environmentalists have backed the new regulations, they have been hard to swallow for many fishermen, particularly in Java where much of the trawl and seine fleet is based. A tenth of Indonesia’s lobster exports come from the South Central Java coast. Many of the crab fishermen work out of boats hardly bigger than recreational canoes, setting gillnets, traps and (now illegal) shallow bottom trawls.

For some men in fishing villages, trawling is the only profession they have ever known. Such is the case for Budi Lukman, a 25-year-old from the Central Javanese coastal town of Berbes, who was among the hundreds of demonstrators in front of the ministry of fisheries last week to protest the new regulations. Budi started working on trawlers when he was fourteen. “I’ve been doing this since I was small, and I don’t know what I’ll do if the ban on trawlers sticks,” he said.

Nearby, old men with weathered faces topped by straw hats nodded in agreement. “We’ve been doing this since the time of Suharto and Sukarno. Using traditional small boats, you can only catch so much, and even then, it takes so much time. With this method, you can get more success,” said one of the older men.

Fishery Minister Susi, who has become known for her renegade policy of sinking foreign boats caught fishing illegally in Indonesian waters, re-tweeted text messages saying that the demonstrators were “oknum,” or gangsters, paid off by the trawling mafia. While some demonstrators balked when asked what kind of boat they worked on, others such as Lukman spoke openly about their profession. A community organizer for the Association for Human Rights and Aid to the People (PHBM) who identified himself as Ceriah asserted the ministry has not introduced any alternate livelihood programs for out-of-work trawler crewmen.

“The new policies are right. The ministers’ job is to look out for the fishermen and their jobs. But they also need to offer solutions, alternate forms of employment,” he said. “She shouldn’t just introduce rules without analyzing the immediate effect it will have on the little people.”

Even those managing the stock assessments used to justify the new regulations are aware of the quandary. “To improve fisheries there must always be a period of reducing fishing and catches, before the fishing begins to improve,” said Jeremy Prince, one of the SFP consultants who worked on the stock assessments.

“This is much easier to do when fishermen are wealthy and can survive a period without fishing, or of catching less, or where there is a strong welfare system,” Prince added. “But no democratic government can ask people to starve so that there will be more fish in the future.”