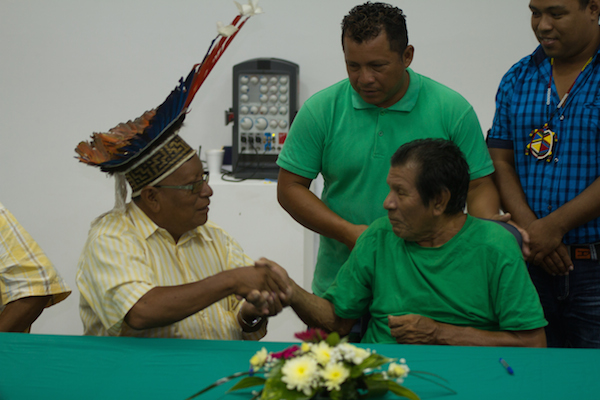 The Southern Suriname Conservation Corridor was made official when indigenous leaders and members of Suriname’s parlaiment met to sign a declaration on March 5. Photo courtesy of Forward Motion.

The Southern Suriname Conservation Corridor came one step closer to fruition when indigenous leaders present members of Suriname’s parliament with a declaration on March 5.

“They’ve been protecting it, and what we now have is a clarified vision of how we can help them to improve its protection,” said John Goedschalk, executive director of Conservation International (CI) Suriname, in a conversation with mongabay.com. “This to me is more legitimate than some minister signing a paper somewhere and then saying, ‘All right, now it’s protected.’”

Building on the success of the Central Suriname Nature Reserve, international organizations including CI and WWF worked to support the vision of the forest-dwelling Trio and Wayana communities to map the 7.2 million-hectare preserve – an area larger than Ireland and home to nearly 1,400 species of plants and animals – and layout strategies to fund and ensure the success the initiative. 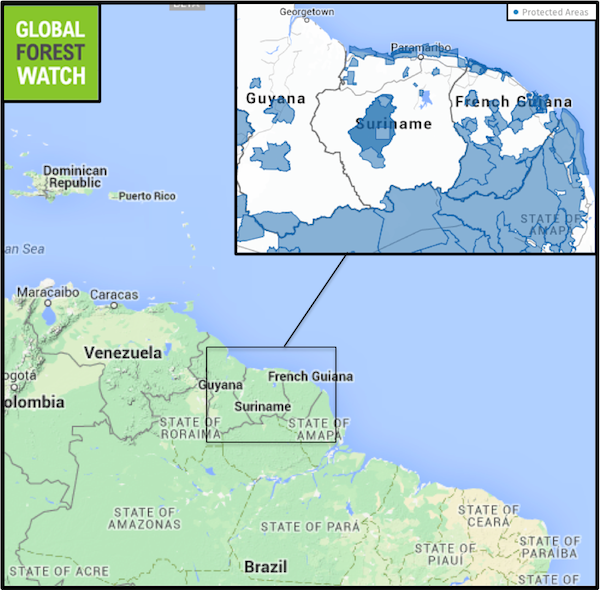 The Southern Suriname Conservation Corridor builds on the success of the Central Suriname Nature Reserve (shown here in the middle of Suriname) and will protect 7.2 million hectares of rainforest, contiguous with protected areas in neighboring Brazil and French Guiana. Click to enlarge.

Suriname, with about 573,000 residents, lost relatively little of its tree cover between 2000 and 2013, as evidenced by Global Forest Watch data, even as other South American countries have seen their rainforests devastated by deforestation. Scientists and conservationists who know the country say that’s due in no small part to Suriname’s indigenous tribes, though their members number just a few thousand and face increasing pressure from loggers and gold miners.

“There’s no place that has remained as intact as Suriname,” said biologist Russ Mittermeier, who is the executive vice chair of Conservation International and has worked in Suriname for 40 years, including a central role in this initiative. Of the indigenous groups, he added, “They’ve largely kept gold miners out.” Mittermeier said that flying over the proposed protected zone reveals little in the way of mining disturbance.

Goedschalk said that the leaders of the Trio and Wayana tribes want to keep it that way, but pressure from within tribal communities for income and jobs might jeopardize that vision. “It is getting incredibly hard for them to hold onto the forest health,” he said. So, in more than a year of discussions, local community leaders have developed a plan for the reserve that includes the provision of jobs for tribe members as rangers and guards. They also intend to establish the value maintaining the unspoiled rivers that supply much of the country’s water, in addition to the REDD+ payments the country should receive for keeping its forests standing. “REDD” is a mechanism that stands for reducing emissions from deforestation and forest degradation, and aims to mitigate global warming through improved forest management in developing countries.

In fact, Suriname has some of the largest reserves of freshwater per capita on the planet, while nearby island nations in the Caribbean rely on costly solutions such as desalination. Suriname’s leaders have long considered selling some of its fresh water bounty, and CI supports the claims of indigenous groups that without the forests of southern Suriname, the country wouldn’t have that potential water market in the first place.

“We believe it really could be the engine of Suriname’s economy in the future, helping it get away from gold and oil,” Goedschalk said. “We want to make sure this incredible treasure of water-generating forests are kept intact.” 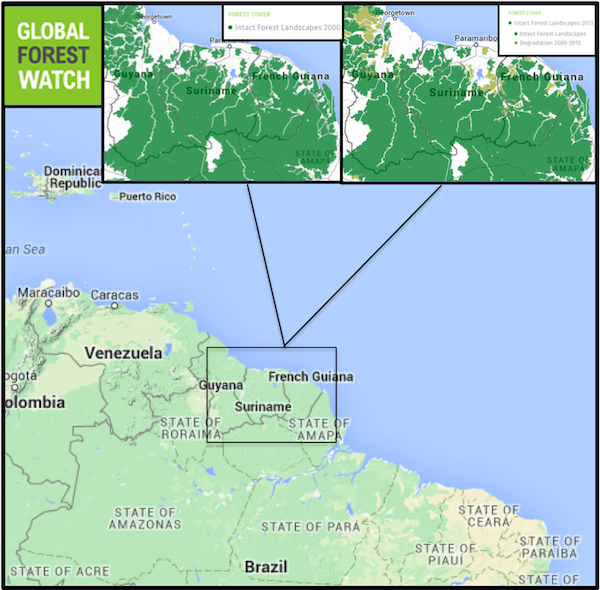 Data from Global Forest Watch illustrate the relatively small amount of intact forest landscape (IFL) – areas of undisturbed forest large enough to retain their original levels of biodiversity – lost between 2000 (left) and 2013 (right) in Suriname. In total, 97 percent of the country was covered by forests in 2000, 95 percent of which were primary in 2010, according to FAO data. Click to enlarge.

“It’s a win-win-win-win situation across the board,” Mittermeier said, “but we’ve got to move quickly because a lot of the tropical world in recent years has been razed.”

Goedschalk pointed out that, even though the indigenous have undoubtedly been instrumental in keeping the country’s forests – and consequently its rivers – pristine for thousands of years, the legal ground they stand on is shaky. “There’s no recognition of collective land rights of the tribal people,” he said.

Before setting aside this protected area, that disconnect between the views of the government and the views of local communities about ownership of the land had thwarted past conservation efforts, Goedschalk added. The members of the consortium responsible for the declaration see legal recognition of indigenous land rights as a necessary step in protecting the forest.

Indeed, an indigenous-backed reserve acknowledges the reality that locally managed forests are usually better off than those under centralized control. To Mark Plotkin, president of ACT – the Amazon Conservation Team – that makes sense. Early in his career as an ethnobotanist, he and his colleagues took notice: “The stuff in indigenous hands seemed to be better managed because these people had a real and daily stake in protecting the forest.” An indigenous settlement within Suriname rainforest. Photo by Rhett A. Butler.

That understanding led Plotkin and others to create ACT with the goal of protecting both biodiversity and human cultures – a “biocultural” approach, he calls it. For example, the group pioneered the idea of employing indigenous park guards, because, he said, they know the forest best.

Plotkin cautioned that the declaration is just the first step, but he supports the discerning approach taken by the leaders of this effort to solve a complex issue. The people of Suriname, he said, have their own saying regarding these types of problems: “To any complicated question there is an answer that is both simple and wrong.” So he lauds the indigenous leaders, as well as CI and WWF, for finding a multi-faceted approach to protect such a large area of rainforest.

He said engaging local communities is a “widely underutilized model” in global conservation efforts that has more promise than top-down efforts. “This idea of working from the outside in – I don’t see as a proven success model, compared to working from the inside out,” he added.