Temple at Tikal, a Mayan city in Guatemala. Photo by: Rhett A. Butler.

Earlier this month, National Geographic made big news: the discovery of what it called a “lost city” below the thick jungles of Honduras. While the coverage has led to scientists crying sensationalism, it also resulted this week in a commitment of protection by the Honduras President, Juan Orlando Hernández, for a long-neglected portion of the country. Located in Honduras’ wild and remote La Mosquitia region, the ruins are imperiled by encroaching deforestation for cattle-ranching which the field team warned was just 20 miles away.

World-renowned ethnobotanist, Mark Plotkin, who was a part of the team that first explored the centuries-old site in February, said the presidential commitment was a “bold move.”

“I see this as an extremely positive and first, but it is not the end of the story,” he told mongabay.com. “Political pronouncements in capital cities need to translate into action on the ground, whereby indigenous peoples, peasant cultures, archaeologists, government officials, the military and the conservation community need to work together for the common good.”

Last week, Hernández called on the nation’s military to ensure the safety of the site, as well as La Mosquitia region in general, which is likely home to many more undiscovered archeological riches. The exact location of the well-preserved ruins is being kept a secret for fear of looters. Hernández also called for a replanting program of cleared forest.

The president’s decree could also translate into better protection for a little-known region teeming with rainforests, high biodiversity, and several indigenous groups. A region, however, that has also been ravaged by creeping forest destruction, illegal colonization, and general lawlessness linked to drug smuggling.

While looting remains a concern, the biggest long-term threat to the site is rapidly-spreading deforestation in the region, according to the field team that seven scientists, including two local researchers with the Honduran Institute of Anthropology and History (IHAH).

“Deforestation has been encroaching on the Rio Platano Biosphere Reserve for over two decades,” said Plotkin. “From the helicopter ride into the site, it is obvious that the deforestation frontier in probably less than 20 miles from the [archeological] site—and moving in that direction. So this environmental destructions threatens both the biological and the cultural patrimony of Honduras.” 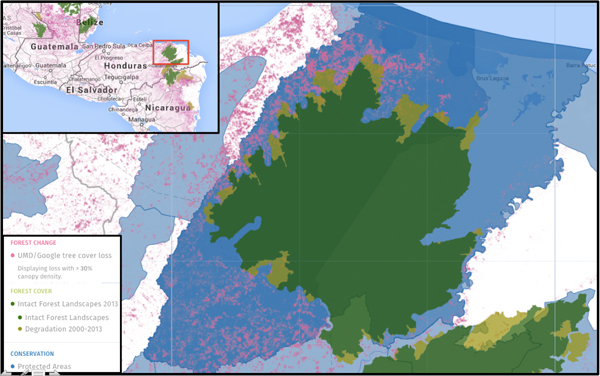 The Rio Platano Biosphere Reserve is in blue. Pink shows forest loss inside the reserve and near it. Dark green is the area that is still considered an Intact Forest Landscape, though brown shows areas that have suffered degradation in the last 12 years. Map courtesy of the Global Forest Watch. Click to enlarge.

The 834,200 hectare Rio Platano Biosphere Reserve—which was initially called the Ciudad Blanca (White City) Archaeological Reserve—is considered the largest intact expanse of forest in the country. First established in 1960 and made a Biosphere Reserve in 1982, the park is now on the List of World Heritage Sites in Danger.

“The designation was the result of an investigation that revealed rampant deforestation, primarily by cattle herders seeking to meet the demand for beef in the United States, in addition to illegal hunting and fishing,” U.S. Senator, Patrick Leahy, said on the Senate floor this week as he lauded the Honduran government for it’s declaration. “Perhaps one of the most significant aspects of the Río Plátano Biosphere Reserve’s designation is that it is representative of the threats to all of La Mosquitia.”

According to the Global Forest Watch (GFW), the Rio Platano Biosphere Reserve lost more than five percent (over 40,000 hectares) of its forest cover from 2001-2012, a stunning number for a protected area. Importantly, GFW defines a broad-swathe of the Rio Platano Biosphere Reserve as an intact forest landscape of IFL, meaning that a part of the reserve is still large and pristine enough to safeguard its biodiversity.

“I have spent a lot of time in a lot of rainforests,” Plotkin told Ted.com. “This is one of very few places in the world where monkeys will come down from the canopy to have a look at you. Tapirs wandered through our camp because they have presumably never seen humans before.”

Rio Platano Biosphere Reserve is home to 39 mammal species, 377 birds, and 126 reptiles and amphibians. There are also likely species still undescribed by scientists given how few researchers have worked here.

“That is why President Hernandez’s announcement is so important,” Senator Leahy went on to say. “La Mosquitia is not just a treasure of the Honduran people; it has preserved centuries of cultural artifacts and is now home to a multitude of plant and animal life that has remained largely undisturbed by the outside world.”

The discovery of the new site has a curious history. It’s origins began with two documentary filmmakers, Steve Elkins and Bill Benenson, who were looking for the purported Ciudad Blanca or White City, which was first described by Hernan Cortez in the 16th Century as lying somewhere inside Honduras.

“I was in the TV biz in 1994 and looking to do a series on interesting adventures. An adventurer told me about the legend of Ciudad Blanca and I thought it would make a good documentary so I organized a three-week filming trip to the jungle. We found some enigmatic evidence but no city…didn’t matter as I was then hooked!” Elkins told mongabay.com.

Teaming up with Benenson, Elkins than tried a new approach: LiDAR . Attaching a LiDAR—which stands for light detection and ranging—device to an airplane allows one to use lasers to map the topography underneath the canopy of even the densest rainforest, and these are some of the thickest on Earth. In 2012, Elkins and Benenson mapped several areas—where they suspected ruins—with the aid of the National Center for Airborne Laser Mapping (NCALM) and the University of Houston for Under the LiDAR Productions (UTL).

“Instead of wandering aimlessly in the jungle looking for the proverbial ‘needle in a haystack,’ LiDAR allowed one to search large areas from the comfort of an aircraft in a matter of days,” explained Elkins. “Airborne LiDAR provides the opportunity to see what the terrain features are under the canopy….nothing else can currently do this.”

With the LiDAR’s finding showing several areas of interest, it was now time to confirm that from the ground. So in February, five foreign scientists and two Honduran researchers spent eleven days in an undisclosed location, guarded by the Honduras military.

They found “a human-modified landscape that includes roads and paths, water control features such as reservoirs and canals, possible river channel modification, and agricultural terraces,” said the head archeologist on the expedition, Chris Fisher, in a Q&A. “A pristine, undisturbed, and important cache of 52 ground-stone objects was located and documented…without a single object being disturbed. No excavations were undertaken; everything was left.”

Findings included a beautifully-carved stone head, possibly representing a human-jaguar combination, known as a were-jaguar that very likely had religious implications in the culture.

As to what culture inhabited the site, that’s still up for debate. Honduras is just south of the Mayan empire and the new site, dating from 1000-1400 AD, is after the collapse of the Classical Mayan culture, meaning what remained of the Mayan culture had significantly shrunk. The new settlement was inhabited by a different culture then, something perhaps distinctly regional but sophisticated enough to build and run cities—and to date unnamed. However, there was likely cross-cultural links between this Central American civilization and the Maya to the north.

Elkins said he felt “elated and vindicated” by the confirmation of the ruins.

But is this new site the long-fabled Ciudad Blanca that first so captured Elkins imagination? Fisher said there is no proof that it is the legendary Ciudad Blanca or White City. Many archeologists, including Fisher, believe that a single White City probably doesn’t exist, but instead refers to numerous settlements that once thrived in this part of Honduras, an undescribed civilization rather than simply a legendary city.

Jaguars are still found in the La Mosquitia region of Honduras and were likely viewed as important religious animals in the pre-Colombian society here. Photo by: Rhett A. Butler.

“At no time in any print or media venue has any member of the team declared that any of the settlements that we have been able to document correspond to the place known in Honduran oral tradition as ‘La Ciudad Blanca’ or that has been popularized outside of Honduras as the ‘Lost City of the Monkey God,'” said Fisher.

Still, the coverage in National Geographic was slammed by an open letter signed by a number of archeologists for sensationalizing the new site, about which little is known yet. Perhaps, even more grievously, the letter criticized National Geographic for ignoring the fact that there have been hard-working scientists working in the region for decades, including Chris Begley, Professor of Anthropology at Transylvania University. Begley is universally noted as the leading archeologist in the region and has explored numerous sites across La Mosquitia.

John Henderson, an anthropologist with Cornell who has long worked in Honduras, did not write or sign the critical letter. But he told the Guardian that “the most offensive part is that there’s an awful lot that’s known that National Geographic left out.”

“You’re going to point your Lidar at almost any valley and you’re going to find something like what these guys find,” he continued. “But what they’ve done is modest in comparison with what Chris Begley has done there for all these years.”

Whatever comes from further study of the new site, however, the most important piece of this may be that the media attention has seemingly spurred the Honduras government to act in the region. Such action could mean much more for local indigenous tribes—the ancestors of the people who lived in those jungle-covered ruins—who have lived through decades of illegal loggers, colonizers, and drug smugglers invading their territory.

“Of course, it was the ancestors of the indigenous groups in Honduras who presumably created the structures and the artwork that were recently encountered,” said Plotkin, though he noted the site has been long abandoned. “On our brief expedition to the site, I saw no evidence of recent habitation or hunting onsite by any population, indigenous or otherwise. Nonetheless, this requires further study and action that so all local cultures’ rights and territories are respected, especially those of indigenous peoples who were certainly there long before we were!””

Senator Leahy told the U.S. Congress that the U.S should “assist” Honduras’ newly-proposed efforts to better safeguard the site and the region.

“President Hernandez’s commitment to preserve these archeological sites from looters and other criminal activity, and to protect the broader forest area by replanting the jungle and countering deforestation, deserves our support,” he said on the floor of the U.S. Senate.