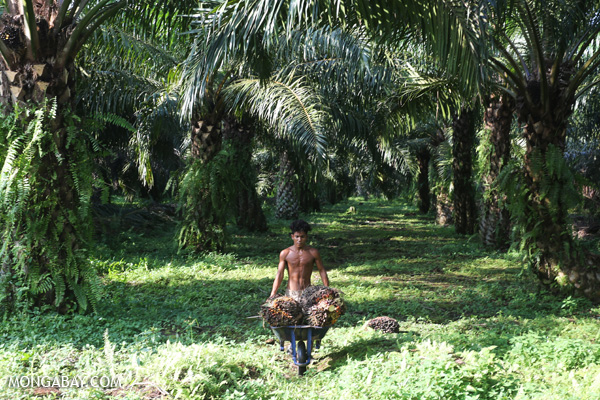 Declining crop prices usually spell bad news for farmers, and poor smallholders in particular. The drop in the price of palm oil from a recent high of US$860 per metric ton in March 2014 to below US$640 in March 2015 (and far below 2010-2012 prices which exceeded US$1000) heralds a shift in perceptions of oil palm from an economic boon to poverty-stricken smallholders, to a liability that ties small-scale farmers to a less profitable commodity [1,2]. The truth is, of course, more complex. The drop in palm oil prices is like a rock hitting the global palm oil pond—the ripples travel across smallholder producer communities everywhere, but the impacts are very different across producer regions.

In Indonesia declining prices have had the most direct negative impacts. Here, smallholder production depends heavily on fertilizer. In relative terms, fertilizer is expensive, and can account for over 60% of the production costs of high-yielding plantations. Thus when the palm oil price declines, so does fertilizer affordability. The capital and credit available to large commercial oil palm companies buffers them from low prices, and allows them to continue to purchase and apply fertilizer. Capital and credit are not so readily available to smallholders. Even when smallholders have ready access to fertilizers through links to companies, their fertilizer costs are deducted from their Fresh Fruit Bunch sales to these companies. Consequently, smallholders have been reducing fertilizer inputs, and yields on smallholder plantations in Indonesia are declining. The gap between the success of large company plantations and that of smallholders is widening [3]. 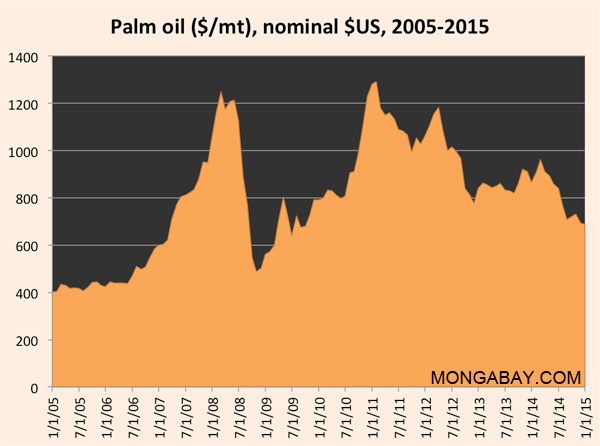 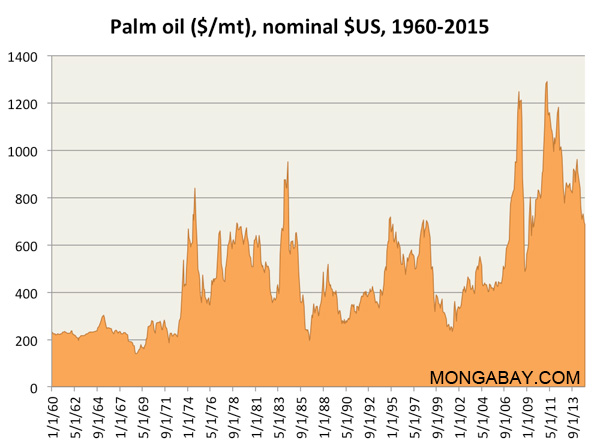 Palm oil price data from the IMF. Click to enlarge.

The situation in Africa is very different. In West Africa, the development costs of large palm oil estates are more than twice as high as in Indonesia. These ventures are profitable only if the price of palm oil remains high. With low prices, these actors are now rethinking their investment and development strategies. Many projects have greatly downsized, postponed or abandoned oil palm development altogether. Structural factors such as the availability of, and access to, land for development is a key limitation, but this has been exacerbated by the current low prices for palm oil. Some companies, however, have sought to increase partnerships with the smallholder sector through outgrower schemes. Such schemes comprise a central milling facility that is supplied by smallholders who receive inputs and technical assistance from the company. In this way, the industries can meet their production targets while shifting the burden of development onto smallholders who become indebted to banks for the extended credit. Smallholder debts are gradually repaid as the Fresh Fruit Bunches are delivered to the industrial mill. In the past governments had to “force” companies to engage with smallholders, but today outgrower schemes are high on the companies’ agenda. This opens a window of opportunity for small-scale farmers to enter the sector, benefiting from a more level playing field. It also, however, exposes them to higher risks. If the palm oil price continues to drop, smallholders might prove unable to repay their debts. 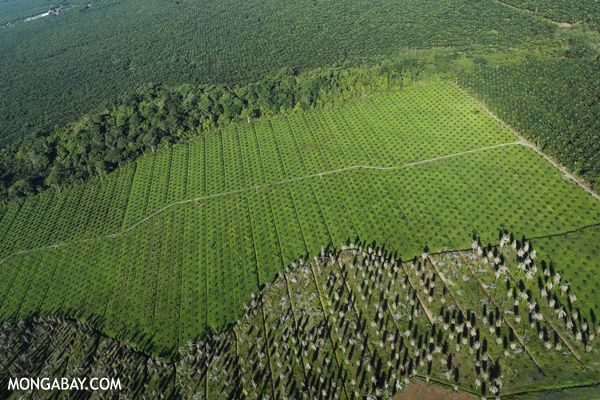 In Cameroon, in Central Africa, a handful of large players sought concessions for over a million hectares of forest for oil palm development as recently as 3-4 years ago [4]. Many of these plans were abandoned even before palm oil price declines, as the available lands were either covered by high forests or by smallholder food crop areas. As for the rest, low prices dissuaded many putative oil palm companies from pursuing further concession negotiations, or even taking up those already awarded. Indeed only two players, Herakles Farms and BioPalm, have begun to implement their plans. Even these investments appear half-hearted at best, as they have done little more than establish nurseries and have only just begun to clear a small fraction of the allotted concessions. As in West Africa, under current conditions the original targets are unlikely to be met, and the Cameroonian government could well end up rescinding many of the concessions. This provides an opportunity for the smallholder sector to fill the vacuum left by the large players. This opportunity is tempered, however, by limited access to industry outgrower schemes, which would otherwise give smallholders access to subsidized fertilizers, improved seedlings, capacity transfer and best practices, and, crucially, credit. As companies retreat from oil palm, possibilities for positive partnerships with smallholders evaporate. Thus in Cameroon, smallholders will have room to grow, but limited support will stymie their efforts to do so. The new National Strategy for the Development of Sustainable Palm Production will likely oblige companies to work with smallholders, but the extent and depth of this obligation remains uncertain. 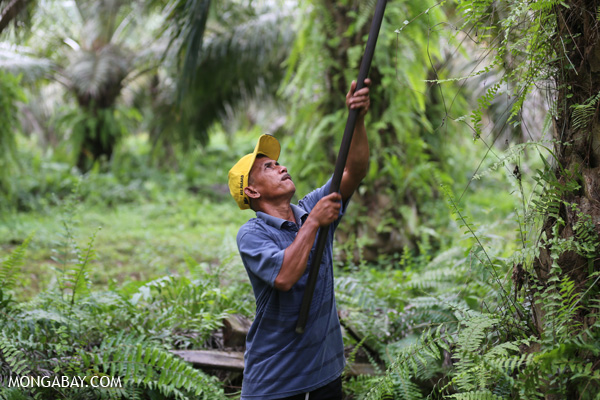 In Colombia, the combination of low palm oil prices and bud rot disease, which afflicts around 25% of the planted area, affect the viability of the oil palm sector, reflected by the recent decline in the oil palm expansion. High production costs already make the sector heavily reliant on governmental incentives. Low prices and widespread disease is sapping the political will for continued support of this sector (an issue that is further complicated by government negotiations with rebel groups who hold sway in some areas where oil palm is grown). At present, smallholders and other producers are buffered from low international prices by a national price stabilization fund and import tariffs (and a large domestic biofuel market), but this only serves to increase the sector’s dependency on government support to maintain market competitiveness.

So the effect of palm oil price declines on smallholder communities varies by region. It is not always bad, but neither is it obviously good. In Africa at least, concerns about massive ‘land grabbing’ by oil palm companies in Africa are somewhat alleviated for now. Smallholders might capitalize on this hiatus, but only if they can overcome the barriers to entry. Ironically, it is company outgrower schemes, as developed in Indonesia and increasingly in West Africa, that might be the means by which these barriers are overcome. Should this be achieved, then preferential expansion of oil palm by smallholders might hold the seeds for a more equitable distribution of economic benefits. It might also allow for more heterogeneous and patchy landscapes, which is good for biodiversity. This possible future needs support and facilitation by large oil palm companies, producer states, but also by corporate buyers who have social responsibility to promote livelihood and environmental sustainability.