Deforestation, habitat destruction, climate change, and other man-made forces are threatening species around the world. But, often overlooked, overhunting is a rising peril to many animals. On the other hand, bushmeat hunting also helps provide vital protein in rural tropical regions and is an important cultural rite for many indigenous tribes. Thus, there is a dual challenge of maintaining food security for forest-dependent populations and ensuring wildlife conservation.

A recent study by the Center for International Forestry Research (CIFOR) analyzed the nutritional, economic, and cultural value of bushmeat, which they define as “non-domesticated terrestrial mammals, birds, reptiles and amphibians harvested for food,” in the tri-region of Brazil, Peru and Colombia.

The study concludes that bushmeat and fish are not the primary source of protein for urban people but instead industrial chicken and canned meats. However, households that do consume bushmeat obtain more iron nutrients and less fat and salt.

In urban and peri-urban areas, bushmeat has a cultural significance and is used primarily as a festival food. The use of bushmeat at dance rituals and ethic festivals allows people express their ethnic identity, promote family bonding and adapt to new cultures. Not surprisingly, bushmeat is consumed more regularly in families that include an active hunter with about 12 percent of households in rural communities eating wild animals.

Finally, hunting animals also plays a role in the region’s economy. According to the study, the bushmeat trade is worth in excess of $1 million a year across three countries. More specifically, 70 percent of economic value from bushmeat hunting activities is in Brazil, 24 percent in Peru, and seven percent in Colombia.

The most common species sold in frontier markets included paca (Cuniculus paca), lowland tapir (Tapirus terrestris), collared peccary (Pecari tajacu), and the red brocket deer (Mazama Americana). The authors state that the majority of the species sold are classified as Least Concern by the International Union for Conservation of Nature (IUCN) Red List. In addition, these species are seen as resilient to hunting and able to adapt to varying habitats. Still, the lowland tapir is listed as Vulnerable and the red brocket deer as Data Deficient. Moreover many large predators—such as jaguars, pumas, anaconda, and caiman—depend on these species for prey. 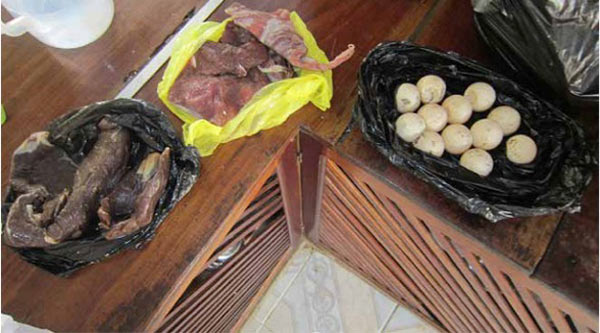 The authors also analyzed the link between biodiversity and nutrition security in the three countries.

“Because we can’t yet substitute wildlife products (animals and plants) by domesticated ones in the diet of many forest-dependent populations and because most these wild products are micronutrient rich (contrary to staple foods) they play a disproportionate role in maintaining a balanced and diversified diet,” said co-author Robert Nasi, the deputy director general of research at the Center for International Forestry Research. “We therefore need to make sure these products continue to exist.”

Overall, the study calls for greater integration of species conservation and food security policies. These policies should take into account the social and cultural values of indigenous people and acknowledge the important role of bushmeat on cultural identity, food security, and the local economies.

“While there isn’t a bushmeat crisis it doesn’t mean there is not a biodiversity issue linked to economic development and land conservation rather than hunting,” said Nasi. 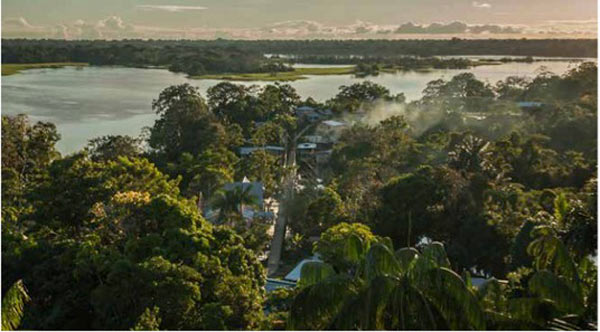 In 2011, Robert Nasi and his team at the Center for International Forestry Research established a Bushmeat Research Initiative. According to Nasi, the program, “raises awareness about the issue (of bushmeat) and proposes manageable solutions.”

The study was conducted between August 2012 and December 2013 in Leticia and Puerto Narino in Colombia; the communities of Caballococha, Santa Rosa and Atacuari River in Peru; and Tabatinga, Benjamin Constant, and Atalaia do Norte in Brazil.