Remnant Brazil nut tree in a landscape cleared for soy fields. Photos by Rhett A. Butler

The Brazilian government has officially confirmed that deforestation in the Amazon is pacing sharply higher than a year ago.

The data lends further weight to figures released earlier by Imazon, a Brazilian NGO, which showed forest destruction pacing 161 percent ahead of last year’s rate. Imazon’s short-term deforestation tracking system is also based on coarse satellite imagery. Both systems are intended to serve as alert systems to enable law enforcement against illegal forest clearing rather than comprehensive assessments of forest loss. 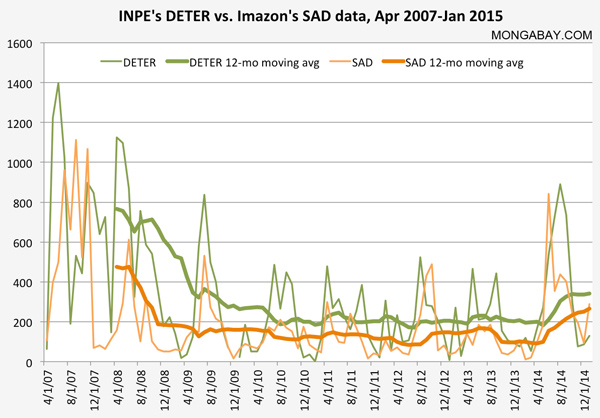 Comparison of INPE’s DETER data with Imazon’s SAD data. Both DETER and SAD are short-term alert systems based off NASA MODIS data. The chart shows monthly data as well as the 12-month moving average to reduce noise. On a historical basis, the recent uptick in forest loss is small. 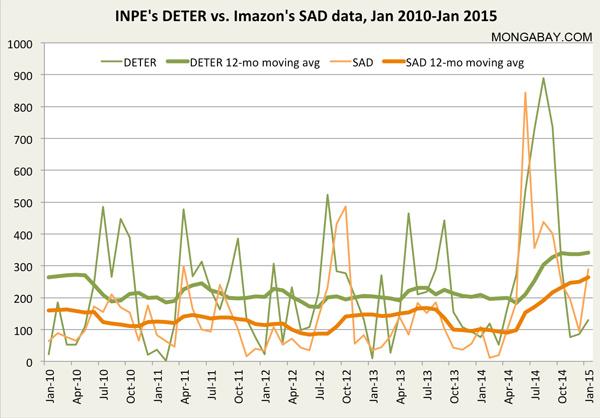 However looking at the trend on a shorter basis reveals the magnitude reveals the significant increase in forest loss in recent months.

Both Imazon and INPE tally overall forest loss in the Amazon on an annual basis for the year ended July 31, corresponding to the height of the dry season when the largest extent of the Amazon is cloud-free. Those assessments use higher resolution Landsat data, which requires more analysis but provides a more precise estimate of how much forest was cleared during the previous year. Imazon also tracks forest degradation caused by selective logging and fire, which usually greatly exceeds the area cleared each year.

While the new data is preliminary, it is nonetheless alarming, raising concerns that Brazil’s recent progress in curbing deforestation in the world’s largest rainforest may be in danger of reversing. The short-term forest loss numbers from both systems are the highest recorded in about six years. It’s the fastest acceleration since consistent record-keeping began in 2007. 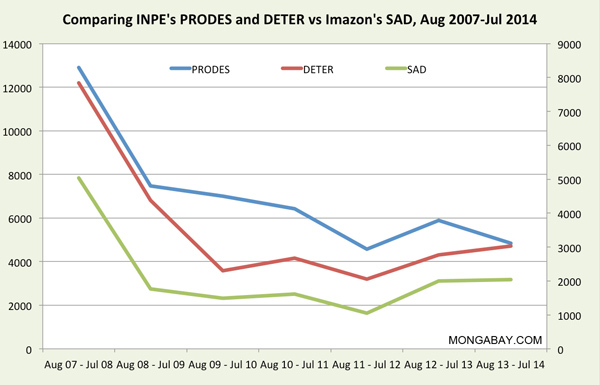 INPE’s PRODES system is based on higher resolution Landsat data and serves as the “official” annual estimate for deforestation in the Brazilian Amazon. The chart includes short-term MODIS-based DETER and SAD data on a second axis for comparison. Until recently, aggregated monthly data in both systems has pretty closely matched annual data, but that correlation has weakened over the past couple of years.

Some environmentalists are blaming changes in the country’s forest code for the rising rate of forest. In 2012, the agribusiness lobby in Congress pushed through new legislation that relaxed environmental regulations governing maintenance of forest cover on private land and eliminated penalties for illegal clearing by small farmers.

But macroeconomic factors may offer a better explanation. The recent economic downturn in Brazil has hit its currency, the real, making export-driven agriculture more profitable since soy and cattle products sold in international markets fetch dollars, while costs are paid in less valuable reais. At the same time, grain and meat prices have risen off their financial crisis lows. A more profitable farm sector makes speculative forest clearing a more attractive option relative to other investments, especially in the context of a flagging Brazilian stock market.

There are also concerns that Brazil has effectively exhausted most of the low-hanging fruit in terms of opportunities for reducing deforestation. A paper published in Since last June argued that further reductions in deforestation would be increasingly difficult without strong and direct incentives for producers to preserve forests. In other words, Brazil has made about as much progress as it can using a “stick” of law enforcement — “carrots” are now needed for further gains. Those carrots could include payments and low interest loans to farmers and ranchers who maintain forest cover above the 80 percent threshold required for legal compliance.

The Brazilian government has recently taken some steps in response to rising deforestation in the Amazon, including sending more police to the region. In late February, IBAMA — Brazil’s environmental law enforcement agency — arrested Ezequiel Antônio Castanha, the alleged ringleader of gang tied to clearance of at least 15,000 hectares along the BR-163 highway in the state of Pará. IBAMA touted the arrest as a major step in controlling deforestation in the area.

Still with rates pacing well-ahead of last year, there seems to be a high likelihood that deforestation for the 12-months ending July 31, 2015 will be substantially higher than the previous year’s rate for the first time since at least the early 2000s. Only a sharp drop in clearing over the the next few months could avoid that fate.