Scientists discover fanged frogs that give birth to tadpoles

by Alexander Montoro on 2 February 2015 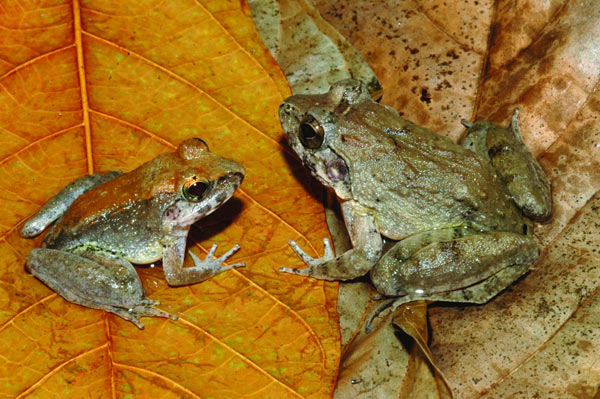 Photograph of newly described frog (Limnonectes larvaepartus) (male, left, and female) from the island of Sulawesi in Indonesia. It is the only frog known that gives direct birth to tadpoles. Photo credit: Jim McGuire Photos

Scientists have discovered a new species of fanged frog (Limnonectes larvaepartus) that is the world’s only known frog able to give birth to tadpoles. If that wasn’t enough, L. larvaepartus also fertilizes its eggs internally, a reproductive strategy of which only a few amphibian species are capable.

The new species of fanged frog is endemic to Sulawesi in Indonesia, occurring across the island’s Northern Peninsula, as well as at the western periphery of Sulawesi’s Central Core. The island is home to other fanged frog species, which comprise the family Limnonectes, and are so named for the twin projections on their lower jaws, which are used in fighting. Male fanged frogs are around 3.7 centimeters (1.5 inches) in length, with females slightly larger at 4 centimeters (1.7 inches). The backs of fanged frogs are typically brownish-grey, reddish-brown or golden-tan, and the underside side may be yellowish or cream.

One of the field scientists involved in the research in Sulawesi was Jim McGuire, a herpetologist at the University of California at Berkeley. McGuire told mongabay.com that he has been studying frogs in Sulawesi since 1998 and stated that “the first year that I made my first trip to Sulawesi and my interest intensified the first time I saw the tadpoles pop out of a female frog in 2001 at Bogani Nani Wartabone National Park on the Northern Peninsula.” 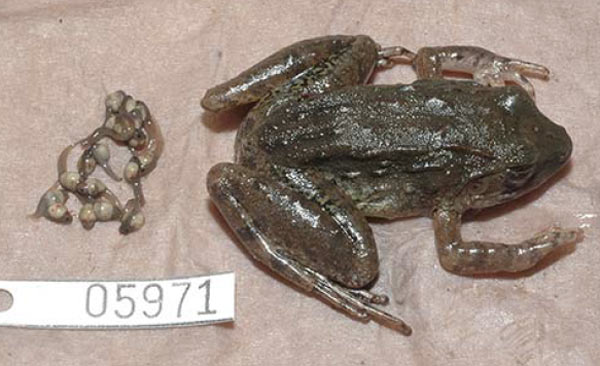 Sulawesi’s plethora of unique species is due in large part to the island’s geologic history, with its long separation from other Indonesian islands and its high mountains leading to the evolution of many animals and plants found nowhere else in the world. As McGuire further explained, “the process of diversification on Sulawesi is clearly linked to the complex tectonic history of the island. Isolation promotes differentiation and when the paleo-islands merged, some of the species present on those paleo-islands may have been able to co-occur and carve up the now unified landscape into distinct ecological niches.” 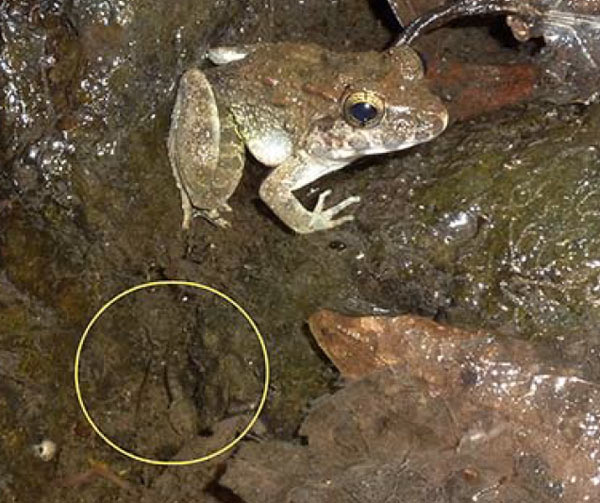 An adult male fanged frog observed calling while perched on the edge of a small pool near a wide stream; several tadpoles were present in the pool, including the two visible within the yellow circle. Photo credit: Desa Uaemate

The fanged frog’s habitat consists of natural and disturbed forest areas and they are generally found in groups of one to five approximately two to ten meters (6 to 33 feet) from streams on rocky ground, amongst leaves, or in secluded grassy vegetation. However, the fanged frog’s complete distribution in the central highlands of Sulawesi is unknown due to inadequate scientific exploration in that region. 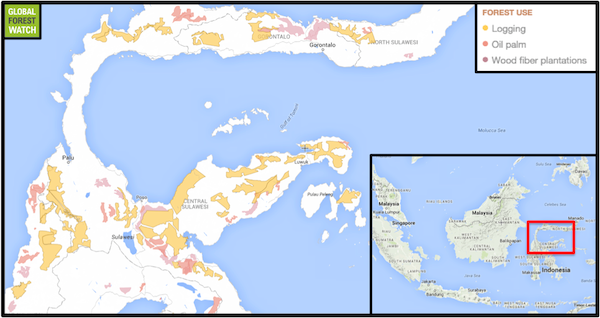 While Sulawesi has not been developed to the extent of other Indonesian islands like Sumatra and the Kalimantan region of Borneo, large swaths have been allotted by concessions. Some of these coincide with populations of the newly discovered fanged frog species (Limnonectes larvaepartus). Click to enlarge.

While Sulawesi has not been developed to the extent of other Indonesian islands like Sumatra and the Kalimantan region of Borneo, large swaths have been allotted for concessions. Some of these coincide with populations of the newly discovered fanged frog species (Limnonectes larvaepartus).

This new fanged frog species faces potential threats to its habitat due to environmental pressures being placed on the island by the 17 million people that live there. According to McGuire “these threats include habitat modification for oil palm and many other smaller-scale agricultural practices such as farming of cacao and various fruit trees.” However, McGuire said that he does not think the species is currently in trouble because “moderately-modified habitat tends to support the species.” But he added “this may not be the case for other fanged frog species and is unlikely to be true in more intensively modified habitats such as plantation farms.” 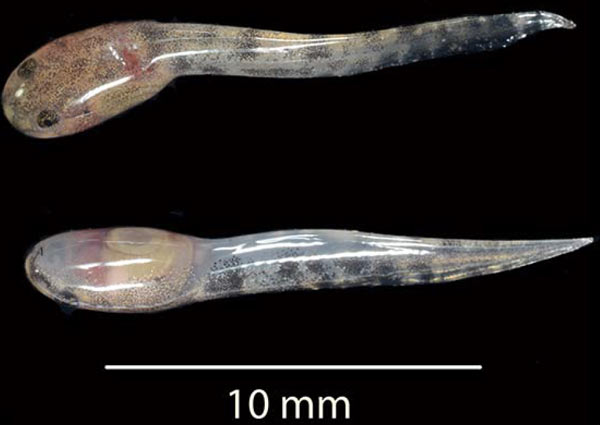 Dorsal and ventral views of tadpoles released by a pregnant female at the moment of capture. Photo credit: Desa Uaemate.