This article is the second in a two-part series about logging in Malaysia. The first part can be seen here

Two international NGOs have called out Malaysia in recent months over the country’s widespread illegal logging. Malaysia has been accused of not doing enough to protect its diminishing forests and thwart the illicit timber trade, particularly in Sarawak, the site of the country’s worst deforestation. In reports issued recently, the organizations claim lack of governmental oversight, endemic corruption and limited transparency have allowed Malaysia’s forests to be plundered by the private sector.

In its report, Global Witness specifically calls out Shin Yang and Samling, two of Malaysia’s biggest timber companies. Both are significant suppliers of timber products to Japan. 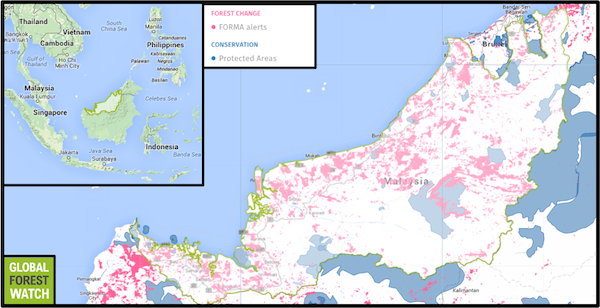 Much of Sarawak’s forest has been impacted by human activity. According to Global Forest Watch, data collected by NASA satellites indicate there were more than 25,000 FORMA alerts from 2013 to 2015. FORMA alerts are issued for areas that have likely probabilities of tree cover loss, whether from deforestation, harvesting of tree plantations, or other causes. Click to enlarge.

The report claims that Shin Yang is cutting down the equivalent of 40 soccer fields of intact rainforest per day, while Samling is “rapidly expanding its destructive logging” in forest claimed by the Penan, an indigenous group native to Sarawak that has suffered greatly from their lands’ rampant destruction.

Attempts by mongabay.com to reach both companies about the claims made in the report were unsuccessful.

The report also slammed several Japanese businesses involved in the Malaysian timber market, but noted that some companies have told Global Witness that they would “assess the operations of [their] Sarawak suppliers.”

Global Witness recommends Japan follow the examples set by the United States, the European Union and Australia, and ensure that the wood it sources is sustainably and legally harvested.

“The 2020 Tokyo Olympics provides an opportunity for Japan to show leadership and steer its construction industry in a new and more sustainable direction that will have benefits at home and abroad,” Global Witness said. “If standard industry practices continue, showcase Olympic construction projects are at risk of using timber sourced from highly destructive logging operations in Sarawak.”

Chatham House, an independent policy institute, noted in their own recent report that while Malaysia has made more progress in tackling the illegal timber trade than countries such as Cameroon — where an estimated half of all timber production is through the informal sector — other peers, including neighboring Indonesia, have gone to greater lengths to curb illegal logging.

“It is disappointing how little progress Malaysia and Cameroon have made in tackling illegal logging, which exacerbates deforestation, climate change and poverty,” Chatham House Senior Research Fellow Alison Hoare said in a statement.

She told Reuters, “In Indonesia this agenda has become closely linked with the government trying to reduce its carbon emissions and its deforestation (as part of the) whole climate change issue which it has been giving a lot of priority to.”

While a recent study claimed that a 2010 moratorium prohibiting district governments from handing out concession licenses lowered greenhouse gas emissions anywhere from 1 to 2.7 percent from 2011-2015, it must be noted that Indonesia’s deforestation rate has increased in recent years. Furthermore, Indonesia recently disbanded its REDD+ agency, which has cast doubt on the country’s commitment to combatting climate change.

Sarawak Chief Minister Tan Sri Adenan specifically has been lauded for his commitment to solving the state’s illegal logging woes. Last November, the chief admitted that Sarawak’s logging sector is “corrupt” and issued a warning to Malaysia’s six largest timber companies to clean up their acts or face consequences.

In January, WWF-Malaysia delivered a statement to mongabay.com commending Sarawak’s commitment to dealing with illegal logging.

“WWF-Malaysia is glad to see that the current Chief Minister [Tan Sri Adenan] has given such high priority to ensure Sarawak’s rich biodiversity, natural resources and heritage are well protected, conserved and managed,” the organization wrote. “We support the Chief Minister’s effort in this and will assist the Sarawak government in addressing the illegal logging problems.”

Hoare also commended Adenan’s comments, but said that real action on his end remains to be seen. “I think that the Chief Minister’s statements are very encouraging, as is the apparent increase in enforcement against illegal logging,” she told mongabay.com. “However, time will tell as to whether he is willing and able to address the fundamental problems the state’s forest sector, which have been based on a corrupt system.”

Chatham House urged Malaysia to commit to a Voluntary Partnership Agreement (VPA) with the EU, something that has been on the negotiating table since 2007. It added that the country must do more to fight corruption and ensure transparency in forest-related decisions, especially in regard to Malaysia’s indigenous peoples.