Seabirds, aerial ocean predators, are known to amass harmful contaminants over their lifespan. Scientists believe this exposure to pollutants, such as blood mercury (Hg), cadmium (Cd), and persistent organic pollutants (POPs), negatively impacts survival rates as well as reproduction, therefore contributing to large-scale population declines. Although previously these assumptions were largely theoretical, recent research in the Proceedings of the Royal Society B involving blood samples from wandering albatrosses points to new conclusions.

Sporting the world’s longest wingspan, the wandering albatross (Diomedea exulans) is a fierce marine predator, residing at the top of the trophic web or food chain. But the massive seabird, found throughout the Southern Ocean and North Pacific, is also threatened with extinction. The new research sought to discover if adult survival rates and long-term breeding performances were impacted by organic and metallic contaminants found in the environment, such as Hg, Cd, and POPs. 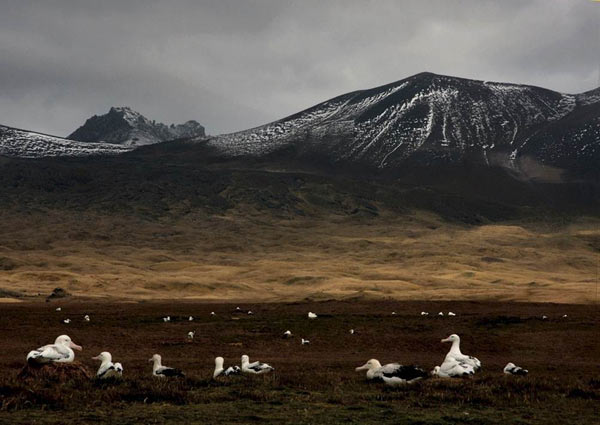 Using a ‘capture-mark-recapture’ method from 2008 to 2012, researchers measured the levels of contaminants in the birds by taking blood samples from nesting albatrosses at lle de la Possession in the Crozet Archipelago of the Southern Indian Ocean, where 300 to 400 pairs of albatrosses nest each year.

“Albatrosses were captured by hand. A sample of venous blood was taken from the tarsus with a 1-milliliter heparinized syringe. Blood sampling was quick (less than 5 minutes),” Goutte wrote in an email.

The scientists found that although contaminants were not associated with increased adult mortality, organic and metallic pollutants led to a lower breeding probability as well as higher failures for hatchlings and fledglings.

As Goutte explains, “these pollutants (PCB, DDT, etc) are already prohibited. But they are persistent in the environment, they are mobile and may reach remote areas and they biomagnify across the trophic web, which means that top predators are the most exposed.”

Although these pollutants may be hard to control, awareness of their effect on seabirds is key to their continued preservation and existence.