Fish being loaded into a truck for processing and export in Batu Putih, North Sulawesi. Photos by Rhett A. Butler.

Today Indonesia’s Corruption Eradication Commission (KPK) signed a memorandum of understanding with the national forestry and fishery ministries as well as a number of provincial governors to better integrate management and monitoring of the country’s oceans and forests.

The goals listed in the MoU are to cleanse the current management system of corruption and to make them more “consistent, sustainable, comprehensive, in line with the law, open, decentralized, just, accountable and equitable to all stakeholders.”

The “National Movement to Save Indonesia’s Natural Resources” MOU was initiated last year by the KPK’s corruption prevention division’s natural resources team. The initial document allowed the team to coordinate and supervise the mineral and coal industry in 12 provinces with the help of the Ministry of Energy and Minerals.

The signers commit to zoning Indonesian waters, for industrial and fishing use, as well as ensuring that national marine borders are distinct and protected from foreign vessels.

“If the provincial government isn’t enforcing regulations or collecting taxes, I ask why,” said Dian Patria, who suggested that the reasons could indicate corruption. Patria, who made the remarks during the MOU signing by the Ministry of Fisheries in Jakarta, is a head official in the KPK’s corruption prevention division.

A survey of fishery industry governance conducted by the KPK in 2014 identified a number of problems at the national and regional level. Little to no tax is collected on fish and shrimp export revenues. The tally of boat permits nationally as per the ministry’s calculations does not match the rosters of provincial governments. And boat and equipment permits are given out with little concern for the fishery offices’ mandate to achieve maximum sustainable yield levels in local ecosystems. Fish for sale in a market in Central Kalimantan

The team clumped the problems into a few key issues. Polluting or destroying marine ecosystems lacks repercussions. The provincial and national governments share no integrated data and information system. Regulations are weakly enforced. Zoning of the national waters is incomplete. And national ocean borders are undefined and porous.

On this last issue, Indonesian fishery minister Susi Pudjastuti has mounted a highly-visible campaign: her ministry has been seizing, and sometimes blowing up, permit-less foreign fishing boats found in national waters.

With a video of the ministry’s latest raid on such a vessel as a backdrop, Pudjiastuti asked for the assistance of the assembled governors and representatives in ensuring that ministry data is accurate.

“I encourage you to verify the gross tonnage of boats present in your province,” she said as the camera zoomed in on the illegally harvested carcasses of tuna and hammerhead sharks in the boat hold.

“If we don’t have this data in order, later our boat count and tax revenue estimate will also be wrong.”

By signing the MOU, the national fishery ministry committed to 89 action points and the monitoring of 110 indicators pertaining to the KPK’s 32 recommendations concerning the key issues. The bulk of action points and indicators deal with cleaning up the legal landscape, clarifying overlapping regulations, and fleshing out ‘incomplete’ ones. 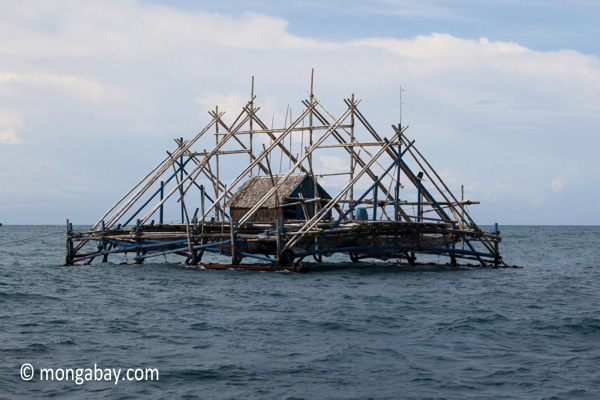 Fishing boat off the coast of West Java

“We’ve been working with the fishery ministry but this will focus our efforts,” said South Sulawesi governor Agus Arifin. “We all used to work individually and that was not effective. Now things will be clearer.”

Participating provinces have to draw up their action plan by March 15th. Progress reports on the program are due on June 10th and December 10th.

Patria confirmed that the reports will be made available on the Anti-corruption Commission Clearing House website: http://acch.kpk.go.id.