A resident of Indudur at work in the fields. Photo by Diana Elviza.

The forest behind Indudur village clings to the steep hillside. The topography itself is enough to protect it from most common threats of development. However, the area is under attack by a more pernicious force: a lack of interest by the younger generation in earning their living here. The difficulty of life compels many to migrate out, leaving the village dominated by older people.

“The difficulty of working these barren fields has made many people wander away,” says Amril Marlin Malelo, a member of the village council. “They go searching for a source of income that can better sustain life.”

Today, there are only 215 households remaining on 1,400 hectares. These remaining people are surrounded by essentially abandoned land. It’s these fallow areas that are of special concern to Zofrawandi Rangkayo Mudo. Zofrawandi has made it his mission to restore the spirit of farming in the community. Since 2007, Zofrawandi has worked with village and community leaders to increase the economic capacity of the empty land, and has developed a series of rules by which to govern these areas. 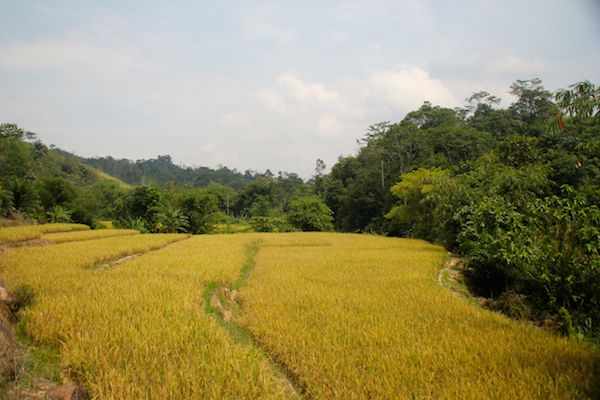 “The village regulations require each family to plant at least one-half hectare of long-term economic investment plants such as rubber, chocolate, nuts, and resin trees,” he explains. “Unmarried men must plant one-quarter hectare of the same. Of course, planting is an easy job… keeping the plants alive is what is difficult. We monitor the health of the community lands, and if more than 70 percent of the plants die, we try to determine what is the cause. If the problem comes from the seedlings, we will search for a solution. If the problem is one of laziness, we will hold a community hearing.”

Failure to maintain a community forest plot is met with increasingly aggressive corrective measures. Initially, the manager of the plot will be the subject of a hearing to try and convince him to comply with the rules. If the situation does not improve, the village will fine the individual as much as two sacks of cement. If this does still not compel him to improve the situation, the village will impose the most severe penalty: preventing the individual from participating in community governance.

On the other hand, those who comply with the community forestry guidelines are eligible to receive an award. Each year, one individual showing excellence in their fields is awarded an assortment of farming implements.

Although this system of forest management has been effective for maintaining forest productivity, until recently the village had no legal authority over the land. So, in 2014 Indudur village worked to obtain a “community forest” designation for 588 hectares in the Barangkek Mountain area. This step provides more formal recognition outside the community of their right to manage the forest.

West Sumatra Province reportedly plans to allocate 500,000 hectares of forest areas as “community and customary use” forests. Currently, there are 108 communities in various stages of securing authority to manage the land they have always depended upon for survival. 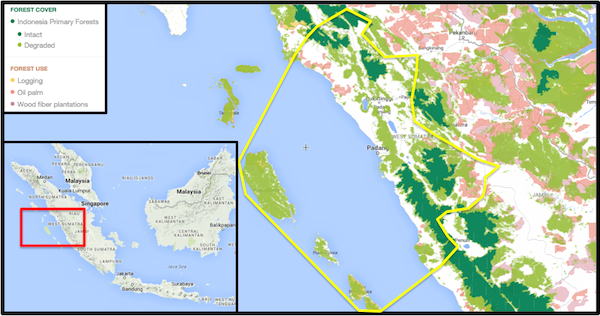 Data from Global Forest Watch shows that West Sumatra is not as affected by development as many of its neighboring provinces, such as Riau, the land area of which is largely occupied by timber, palm oil, and wood fiber concessions. Still, much of West Sumatra’s primary forest has still been degraded over the last decade. Click to enlarge.