Television inspired Syafrizal to act. As he watched report after report of land conflicts exploding in Sumatra and Kalimantan, he realized nobody was safe, and his village might be next.

“We were managing communal land, but according [to] the government it was protected forest,” Syafrizal recalls, “I knew that what was happening elsewhere could happen to us.”

He immediately began encouraging his neighbors to enter into proactive discussions with nearby villages. His goal: to establish a formal system of governance and regulation that would protect the community’s right to access the land upon which they all depended.

There are some 14,672 people living on 19,250 hectares in the rolling country of the Bukit Barisan mountains. Their elevation ranges from 12 to 800 meters (40 to 2,625 feet) above sea level. Biodiversity in the area is still high, with reports of Sumatran tigers, primates, deer, porcupine, and wild boar living there. Natural forest products such as rattan, honey, pandan, bamboo, mushrooms, and swallows nests are still readily available. The natural beauty of the area draws visitors from nearby cities, and the residents plan to establish tourist attractions to supplement their income. 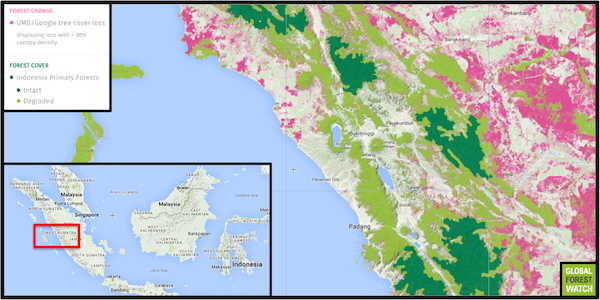 West Sumatra’s stretch of the Berisan mountains supports large swaths of primary forest. Yet, they have experienced significant degradation since 2000, according to data from Global Forest Watch. Click to enlarge.

Since the forest is located in the highlands, the locals fear that removing the trees could potentially result in floods and landslides—a fear realized in 2013 when rising water breached the levee through town, destroying homes and property.

“Bridges, roads, houses, and fields were completely inundated. The levee along the Salisikan river was breached,” said area resident M Hasan K. “The levee was constructed from just piled stones. Houses, rice fields… gone. All because the forest had been cut upstream.”

This widespread flooding renewed the villagers’ determination to protect the hills surrounding their communities. Finally, on December 2, 2013, the Forestry Department designated 1,336 hectares of the Korong Salisikan and Kuliek river watershed as “hutan nagari” or community forest.

Armed with their newly recognized status as guardians of the forest, the residents quickly established regular patrol shifts to monitor the area and prevent outsiders from illegal logging—a constant threat regardless of what designations exist on paper. They work cooperatively to manage the forest using sustainable practices, ensuring the abundant resources can be handed off to their grandchildren. Less than a year after they took on management, the success of their program gained national attention.

In August 2014, the head of Indonesia’s REDD+ management body visited the community forest. Impressed by what he saw, he reiterated the importance of involving the locals and drawing from local knowledge to effectively manage and conserve the land. He noted that taking care of the forest is an ancient community practice, and Indonesia must recognize and utilize the wisdom accumulated by the local populations.