Scandal and intrigue overshadow environment at the Simandou mine in Guinea

When I was a Peace Corps Volunteer in West Africa decades ago well-laid plans often crumbled to dust in the unpredictable confusion of life there. We just muttered with resignation, “WAWA” – West Africa wins again. The Simandou iron ore mine in Guinea could be one of the biggest WAWAs the region has ever produced.

Located in a lushly forested area of southeast Guinea, the Simandou Mountains lie about 500 kilometers (310 miles) in a straight line from the capital Conakry. Under the lush vegetation in this remote area sits the largest unexploited iron ore deposit in the world waiting for someone to dig it up and more than double Guinea’s GDP. The industry says it will also create 45,000 jobs by exploiting the iron ore.

Tom Butler of the International Finance Corporation, which has a five percent stake in the Rio Tinto project, describes the mine and associated infrastructure as “potentially transformational” for the country. The government plans to outsource construction of a 670 kilometer (420 miles) railway from the mine to a new port south of Conakry to a third party consortium, potentially stimulating agricultural production and other mining ventures in the remote east of the country.

“Simandou is one of the largest and best quality iron ore deposits in the world,” Kerfalla Yansané, Guinea’s State Minister of Mines and Geology said. “It has the potential to provide the global market with highly competitive ore for more than 40 years. This estimated $US20 billion project … will boost Guinea’s whole economy and spur our Southern Growth Corridor through mining, agriculture, forestry, livestock and trade. It’s about unlocking our huge potential…”

The rich iron ore deposits have been known since the 1950s, but political instability, inaccessibility, and, more recently, a combination of corruption and lawsuits have delayed mine construction and production. Now Ebola stands in the way: the mine area lies only 50 kilometers (30 miles) east of Macenta, one of the first reported Ebola outbreak areas.

In 1997, the Guinea government divided the Simandou Mountains into four exploration blocks. Rio Tinto, the world’s second largest mining company, gained the exploration license to all four. In 2008, as President Lansana Conté lay on his deathbed, he stripped Rio Tinto of the two northern blocks of Simandou, claiming the mining giant was developing the site too slowly.

Mo Ibrahim, a Sudanese billionaire who gives a prize for African leaders who retire with reasonably clean records, questioned whether Guinean officials who agreed to the grant were “idiots, or criminals, or both,” as reported by the Economist. BSGR paid nothing up front (except an alleged $100 million in bribes
) and later sold 51 percent of its concession to Vale, a giant Brazilian mining firm, for $2.5 billion.

In 2014, the current Guinea government of President Alpha Condé investigated the BSGR acquisition. After concluding that bribery and corruption were involved, the government cancelled the licenses belonging both to Vale and BSGR. Now, Rio Tinto wants the two northern blocks back. Lawsuits and charges of corruption
are flying in every direction as Vale and BSGR recently lost their bid
to dismiss the Rio Tinto lawsuit.

Even the billionaire philanthropist George Soros and the British former head of the U.N. Development Program, Lord Mark Malloch-Brown, have become embroiled in the affair.

Soros was an advisor to late President Conté, helping rewrite the country’s mining code and review old contracts through the Revenue Watch Institute
, a natural resource governance and policy organization bankrolled by Soros. According to The New Yorker
, Steinmetz and colleagues blame Soros for their problems regarding Simandou. To make matters worse, the public relations firm paid by BSGR to make President Conté look bad in the affair terminated their contract with the company. BSGR blamed Malloch-Brown, who is close to Soros and a senior executive in the publicity company, for the interference. BSGR then sued Malloch-Brown for disclosing confidential information to Soros and won an out-of-court settlement.

Evidently, BSGR’s Steinmetz thinks he may be able to hold onto the two northern blocks as the company’s website
describes the Vale-BSGR Guinea project (VBG), including their intention to build a Trans Guinean railway to a new port in Liberia. Steinmetz has even hired Joseph Lieberman, a former U.S. senator, and Louis Freeh, former head of the FBI, to conduct investigations into all of the corruption allegations.

The financial stakes are enormous, which explains the Hollywood scenario of intrigue and betrayal now playing through various courts in Guinea, Europe, and the U.S. The Simandou iron mountain contains over two billion metric tons of high grade ore in the southern Blocks 3 and 4 alone. This would make Rio Tinto and its primary partner, the state-owned Aluminum Corporation of China (Chinalco), the world’s largest iron ore producer, shipping up to 100 million tons per year at full production. With the two northern blocks added, production could double.

In total, Simandou could generate a massive $140 billion over the next 25 years, leading Tom Albanese
, the Rio Tinto’s former chief executive, to boast to shareholders that Simandou was, “without doubt, the top undeveloped tier-one iron-ore asset in the world.”

Largely forgotten in all of the financial drama is the fact the Simandou mine would be constructed in a Key Biodiversity Area (KBA), as defined by a consortium of conservation organizations including Conservation International, IUCN, and BirdLife International. KBAs are sites of international importance for the conservation of biodiversity at the global level. 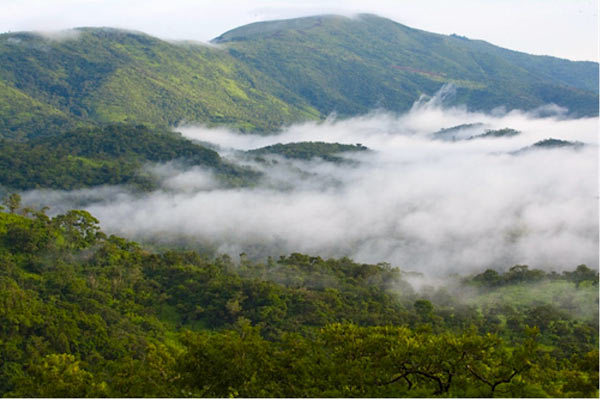 The Pic de Fon forest supports endangered chimpanzee populations as well as hundreds of other rare and endemic species of fauna and flora. Courtesy of Rio Tinto

The Pic de Fon Classified Forest – supposedly a protected area – is smack in the middle of the mine concession area. The biodiversity hotspot provides refuge for two groups of endangered West African chimpanzees (Pan troglodytes verus), four endangered monkey species, hundreds of endemic mammals, birds, amphibians and reptiles, and over 1,800 endemic plant species. The Upper Guinea forests along the Simandou Mountains are among the last remnants of the great rainforests that once covered the hills and mountains of the lowlands of West Africa. But the forest’s formal protected status has not appeared to slow down the project at all.

In light of the elevated biodiversity risks associated with the Simandou Project, Rio Tinto has proposed it as a pilot site for the implementation of its Biodiversity Strategy, formulated in 2004. The main goal of the strategy is for Rio Tinto to have a Net Positive Impact (NPI) on biodiversity by minimizing the negative impacts of its activities. Since the International Finance Corporation (IFC), the private investment arm of the World
Bank, is co-financing the Simandou Project, it is subject to several Performance Standards (PS) including PS6
on Biodiversity Conservation and Sustainable Natural Resources Management.

“This Project is a priority for IFC, given its potential to bring jobs, infrastructure and revenues to Guinea,” said Jin-Yong Cai, IFC Executive Vice President and CEO.

This Performance Standard reflects the objectives of the Convention on Biological Diversity to conserve biological diversity and promote the sustainable use of renewable natural resources. PS6 addresses how clients can avoid or mitigate threats to biodiversity arising from their operations as well as sustainably manage renewable natural resources.

As a part of its Biodiversity Strategy, Rio Tinto conducted what is perhaps the most complete Social and Environmental Impact Assessment
(SEIA) study ever produced, supplemented by a comprehensive Social and Environmental Management Plan (SEMP). More than a hundred consultants in every environmental and social field imaginable toiled between 2007 and 2011 to produce 44 chapters and various summary reports totalling thousands of pages, including hundreds of maps, tables, graphics, and photographs that describe the biodiversity and cultural heritage of the area, and the impacts that mining activity could have on them.

Given that the mining and associated transport will be quite destructive, the challenge is great. The mining process, in this case, starts with clearing of vegetation and removal of overburden from the mine area. Miners extract the ore by drilling, blasting, excavating, and loading onto haul trucks. Material is then carried to crushers located within each pit where it undergoes a first stage of reduction in size before being loaded onto conveyors to be carried down to the ore processing area. The overburden, mineral waste and low grade ore, are removed from the pits and deposited within waste emplacements located adjacent to the pit area. This will continue until sufficient space becomes available within the pits, and waste material will then be backfilled into the worked out areas. 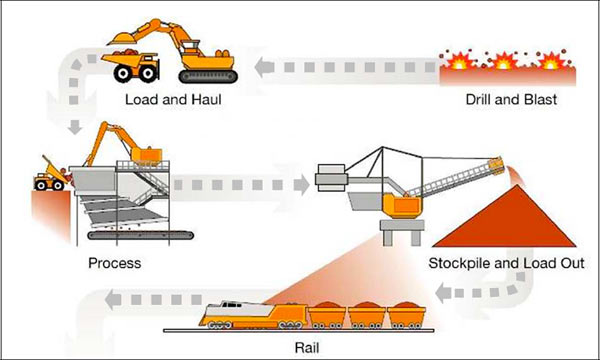 At the ore processing area, the iron ore undergoes further stages of screening, secondary crushing, and tertiary crushing to reach a size suitable for direct sale to steel mills. The crushed ore is then carried by conveyor to a temporary stockpile where it is held before being loaded onto trains heading for the port. 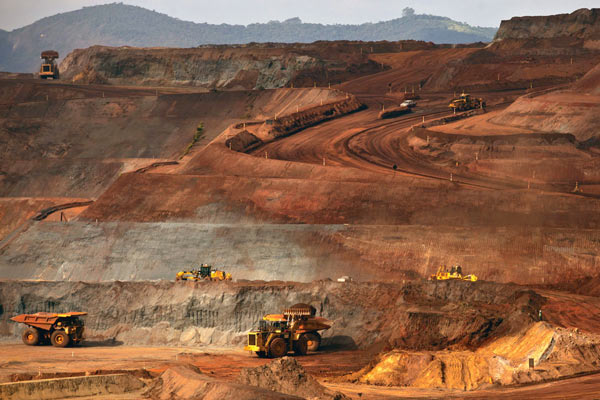 The Rio Tinto schematic diagram of the mining process omits the massive pits that are created, which destroy large areas of vegetation and the biodiversity living within. Courtesy African Business Magazine 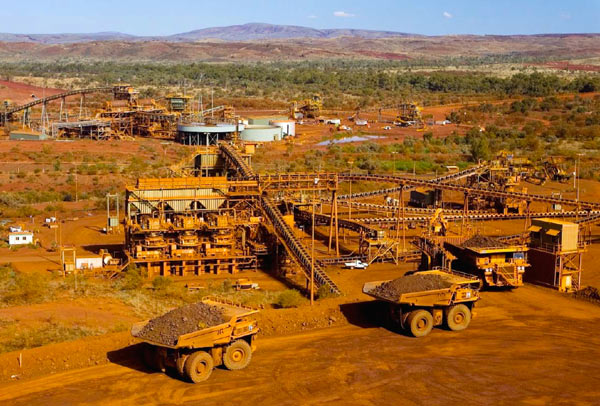 The ore processing area, where it is crushed to the desired size, also creates considerable disturbance to the land. Courtesy Rio Tinto.

According to Steve Boyes, a National Geographic Emerging Explorer who has investigated the Simandou mine in-depth, the Endangered West African chimpanzees living in the Simandou Mountains are the last viable population in the Konyan highlands.

The Konyan highlands in southeast Guinea are “the water tower of West Africa,” said Boyes. The mine will not only destroy the habitat of the chimpanzees and increase bushmeat hunting by workers and their families, he adds, but “open mining pits on the top ridge will damage mountain catchments and alter hydrology, increasing turbidity in downstream waterways, lowering groundwater levels, drying up springs, and polluting local rivers.”

The Rio Tinto study estimates that there are up to 50 chimpanzees in the Pic de Fon Protected Area, divided into two groups, one in Ouéléba and one in the Pic de Fon itself. A Pic de Fon Management Plan has been formulated with input from surrounding communities. The Plan’s objective is to ensure the chimpanzee’s survival through mitigation both of pre-existing threats and impending mining impacts.

Success hinges on three key conditions. First, chimpanzee habitat that will not be lost to mining operations must be protected; second, hunting must be controlled; and lastly, sufficient additional habitat must be confirmed for chimpanzees. This new habitat must be both accessible and secure prior to the loss and degradation of currently occupied core areas. 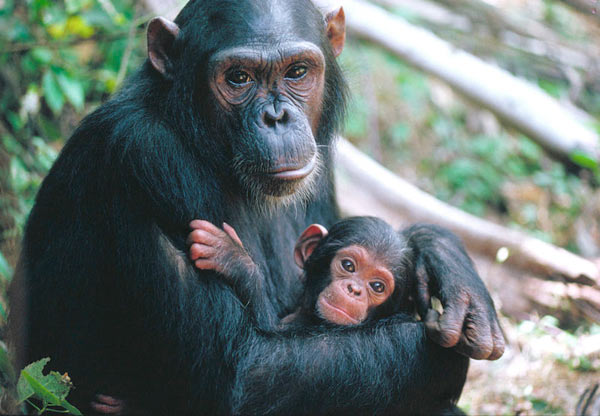 The West African chimpanzee (Pan troglodytes verus) is classified as Endangered by IUCN. Courtesy of Goprimal.

Rio Tinto’s study estimates that 50 square kilometers of chimpanzee range will be lost to the mine, 12 of those in the Piq de Fon forest. Local communities have agreed to stop hunting in the classified forest, which will remove pressure, potentially allowing chimpanzees to migrate away from the mine activity and remain a viable breeding population. However, many factors remain unknown, especially how chimpanzees will respond to losing their homes.

A worse case scenario is that the two groups will fight over territory, resulting in the annihilation of the smaller group of 10-14 individuals in Ouéléba.

“With massive infrastructure investment, this Project is of critical importance for the people of Guinea,” said the President of Guinea, Alpha Condé. “It’s a nationwide priority that goes beyond the mines and far beyond our generations. With transparent and fair deals, our mining sector has the potential to be a game changer for Guinea.”

But during the signing, no one mentioned the irreplaceable forests or the endangered wildlife. Nor was their any discussion of Rio Tinto’s Biodiversity Strategy and whether it can stand the test of Simandou. One wonders what Simandou will look like in 40 years time after five billion tons of ore have been dug up and shipped off to China. Will there still be any West African chimpanzees left to explore what remains, and possibly mutter “WAWA?”